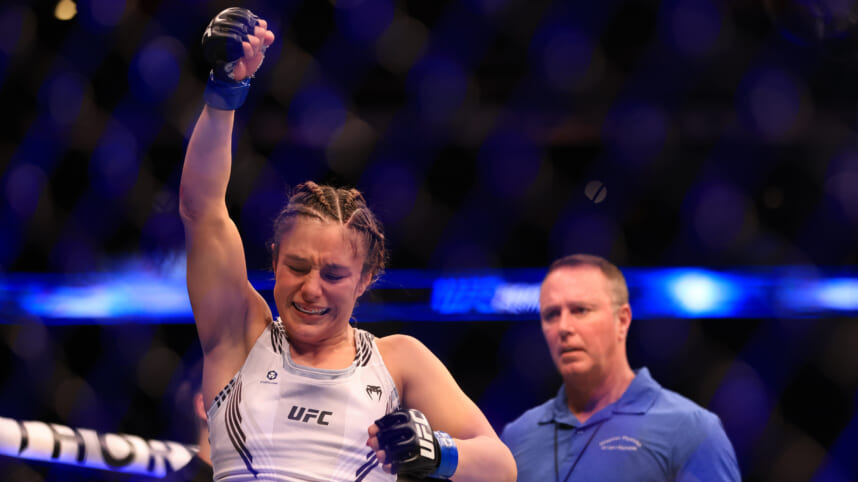 Given the lack of fresh challengers for Valentina Shevchenko, Grasso and Araujo were fighting for a potential title shot this evening. For Grasso, she was looking to stay perfect since moving to the flyweight division.

Viviane Araujo had only suffered two losses in the UFC. Both of those losses came against former title challengers. This evening, she was looking to show that she belongs at the top of the division.

The UFC Vegas 62 headliner kicked off with a touch of the gloves. Araujo takes the center and Grasso stays light on her toes on the outside. Jab to the body from Grasso and then she lands a nice combination. Araujo upping the pressure to counter.

Nice jab lands for Araujo. Slick 1-2 from Grasso. Left hook to the body now for Grasso. Leg kick from Araujo and she follows with a jab. Power jab from Grasso snaps the head back of Araujo. Araujo steps forward and these two trade big shots.

Lead left lands for Grasso. Left hook now for Araujo. Right straight for Araujo now and Grasso counters. Big low kick from Grasso. Now a lead left for Grasso and Araujo shoots for a takedown. Grasso easily stuffs it and they are back to striking.

Both land good shots, but a stiff jab on the exit backs up Araujo. Now it’s Araujo lands a big left. Power low kick from Grasso and a left hook. Now a big leg kick from Araujo. Two straight power jabs from Grasso. Brief takedown from Araujo but Grasso is right back up.

Nice knees in the clinch from Grasso. The round comes to a close and it’s a really close one at UFC Vegas 62.

Entering the second and that first could have gone either way. Both meet right in the center to start the second. Big shots from Grasso get things going. They trade right hands and Grasso lands a high kick. Body kick now from Araujo.

Huge left from Grasso as Araujo starts pressuring. Good shots landing now from Grasso. Araujo still on the pressure but is a step behind right now. Right hand from Araujo but it’s countered with a flush 1-2 from Grasso. Body kick from Grasso.

Araujo floats a shot and Grasso counters with a vicious combination. Two big hooks to the body land for Araujo and then she lands a takedown. Araujo moves right into side control. Grasso looking to force a scramble but Araujo is doing a good job of controlling here.

Nice knees on the ground from Araujo. Grasso continues looking for an escape but Araujo is staying heavy on the chest pressure. Grasso explodes and gets back to her feet. Immediately throwing heat is Grasso who can still take this round.

Entering the third at UFC Vegas 62 and I personally have it 2-0 Grasso, but it’s close. They touch gloves and here we go. Araujo tries landing a power combo but Grasso evades. Both ladies trade jabs in the center.

Big overhand right lands for Grasso. Another trade of jabs in the center. Beautiful jab from Araujo gets Grasso off-balance. Big right straight now from Grasso. Huge 1-2 from Grasso. Leg kick and another big right from Grasso. Araujo lands a right of her own and Grasso lands a big left. Another close round, but I think Grasso took it with the end. 3-0 Grasso at UFC Vegas 62.

This main event at UFC Vegas 62 is really close, but I think Grasso is ahead at the moment. Head kick from Grasso starts the striking and Araujo answers with couple of big shots. Two big jabs from Grasso. They trade jabs.

Low kick from Araujo and Grasso lands a left hook. Low kick and a big combination up top from Grasso. They trade jabs again. Front kick up the middle from Araujo. They both trade big shots in the center. Right cross from Araujo.

Right hand snaps Araujo’s head back. Araujo is staying on the pressure but now she’s missing a bit. Right straight from Grasso. Low kick and a combination from Grasso. Araujo tries for a takedown but Grasso’s defending well for now. Big knees from Grasso in the clinch. Round comes to a close and it’s another close one at UFC Vegas 62.

Entering the final round at UFC Vegas 62 and this could be anyone’s fight. I think Araujo needs a finish, but who knows at this point. Grasso pushes forward immediately to start the final frame. Lots of feints from Grasso here to start.