After winning at UFC 278, is the trilogy next for Leon Edwards? 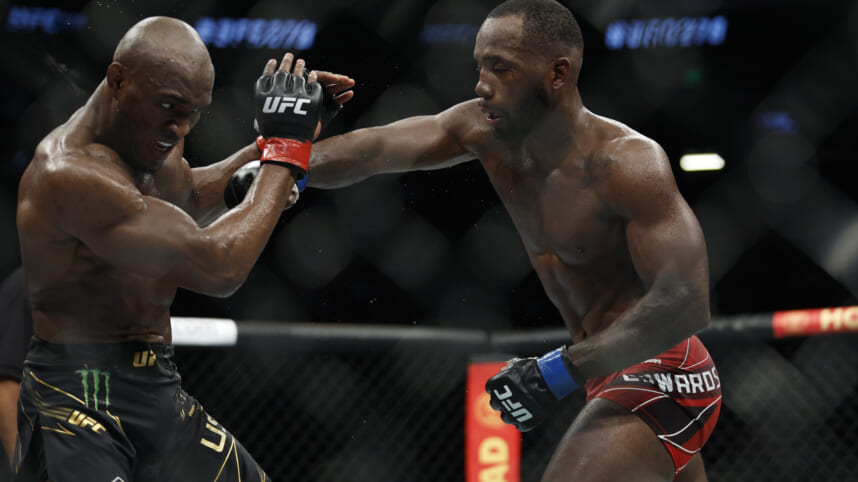 Over the weekend at UFC 278, we saw an all-time shocker in the main event. Kamaru Usman (20-2) was looking to defend his welterweight title and pound-for-pound status against Leon “Rocky” Edwards (20-3, 1 NC).

In the first round of the fight, Edwards shocked everyone with a trip takedown of Usman. It was the first time that Kamaru Usman had been taken down inside the octagon. However, in the second round, Usman started doing what he does best.

With a combination of pressure and his wrestling, Usman started taking over the fight. Usman comfortably won the second, third, and fourth rounds of the fight. Entering the fifth and final round, Leon Edwards needed a miracle to become UFC welterweight champion.

Unfortunately, the round wasn’t going well. Usman was once again controlling everything and looked like he was well on his way to winning the fight. However, with 58 seconds left, Leon Edwards did the unthinkable. With a left jab feint, Edwards unloaded a head kick that landed flush on the chin of Usman.

Usman crumbled to the mat out cold and Edwards was the new UFC welterweight champion.

Leon Edwards shocked the world and how he’s on top of the mountain as the welterweight champion. The big question now is what’s next? Will the trilogy be next for Edwards or will there be another fight for him in the meantime.

Jorge Masvidal is already trying to get in the mix saying he should fight Edwards next due to their history. However, the prospect of Masvidal getting a UFC title shot right now off of three straight lopsided defeats is truly comical.

Khamzat Chimaev would have the best argument given his booking history with Edwards and considering the fact that he was going to get a title shot should he beat Nate Diaz. Chimaev has also called out Edwards after Saturday night.

All that being said, there’s no doubt the trilogy should be next. Usman won the first fight and he was dominating the second fight until he got caught. He’s arguably the greatest welterweight in UFC history. If anyone deserves an immediate rematch, it’s him and he will get it next.