After loss at UFC Vegas 26, what’s next for Michelle Waterson? 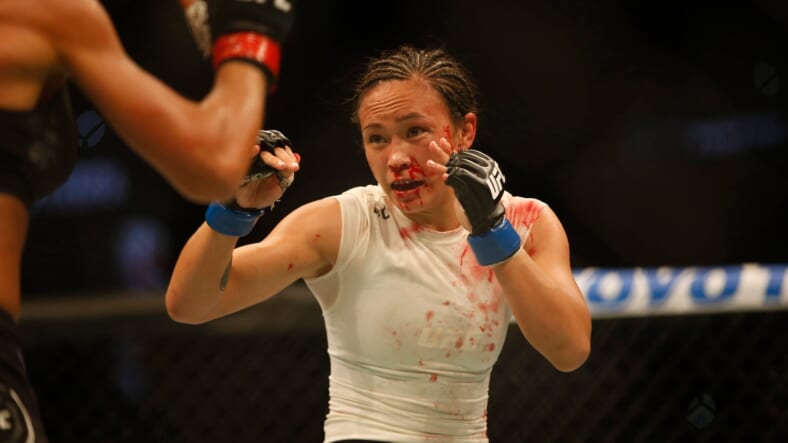 This past weekend at UFC Vegas 26, two top ten strawweights went head-to-head as Michelle Waterson (18-9) took on Marina Rodriguez (14-1-2). The main event came together on short-notice, but both of these strawweights brought it.

For The Karate Hottie, this was her second straight short-notice main event. Back in September, Waterson was set to take on Angela Hill. After the original main event fell through, the UFC moved Waterson and Hill up to the main event.

Despite not training for it, both ladies went five hard rounds. Waterson walked away with a split decision victory. Two weeks ago, this fight wasn’t even on the card for UFC Vegas 26.

However, after TJ Dillashaw fell out of the main event, the promotion approached Waterson and Rodriguez about headlining. Due to the short-notice nature, the two agreed to meet at flyweight to avoid a drastic weight cut.

It was a back-and-forth affair at UFC Vegas 26. However, Marina Rodriguez was clearly getting the better of the exchanges. While it was competitive, Rodriguez walked away with decision victory on all three judges scorecards.

While it was short-notice, UFC Vegas 26 was a very big opportunity for The Karate Hottie. Had Waterson won on Saturday night, she would’ve had two consecutive wins and she would’ve been in line to fight someone in the top five.

However, she didn’t get the job done on Saturday. With the loss, Waterson falls to 1-3 in her last four. Granted two of the losses came to former UFC champions and one was to Rodriguez who looks like she can be a future champion.

I don’t think the loss hurts Waterson at all and she was the betting underdog heading into the fight. So what should the UFC do with The Karate Hottie next? Well, I don’t think they have to look far in the rankings.

I actually really like the potential matchup between Waterson and Claudia Gadelha (18-5). Both strawweights are just inside the top ten and they are both coming off of losses in their last fight.

I feel like both of them are in a similar position. Both need a win and whoever loses would really have to take a step back and consider what’s next. I think it’s a matchup the UFC should pursue and I’m all for it being what’s next.