After huge knockout win at UFC Vegas 25, what’s next for Jiri Prochazka? 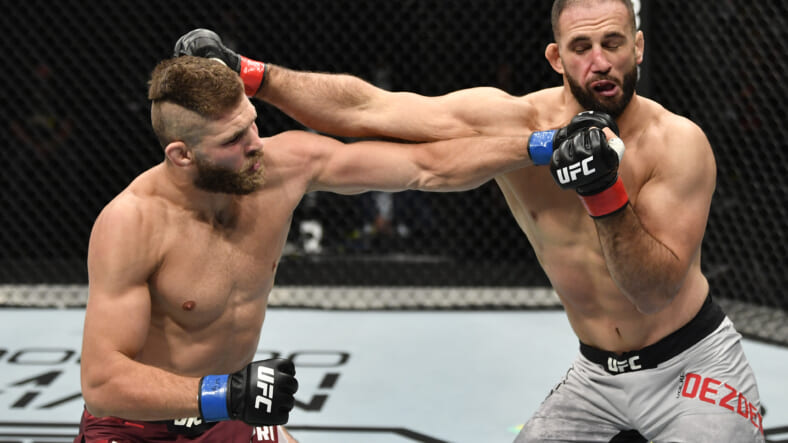 This past Saturday at UFC Vegas 25, we saw a big time matchup in the light heavyweight division. Top contenders Dominick Reyes (12-3) and Jiri Prochazka (28-3-1) went head-to-head.

Dana White had said earlier in the week that the winner of this matchup would be the number one contender in the UFC‘s light heavyweight division. Of course, number one behind Glover Teixeira who’s scheduled to fight the champion Jan Blachowicz in September.

Reyes was coming off of back-to-back title fights where he came up short in both. However, there’s no questioning that Reyes is at the top of the UFC‘s light heavyweight division. Jiri Prochazka made his octagon debut last July on Fight Island.

There was a lot of mystique surrounding Prochazka. Out of 26 professional wins, 23 were by knockout. He immediately showed off his talent at UFC 251 by knocking former title challenger Volkan Oezdemir out cold in the second round.

Prochazka was looking to continue that momentum on Saturday night and he didn’t disappoint. UFC Vegas 25‘s main event was incredibly fun and Prochazka fought like an avalanche. He just kept coming after Reyes looking for the finish.

In the second round, Reyes caught him flush and Prochazka had to shoot for a takedown. However, after he recovered and there was a scramble, Prochazka landed a savage spinning back elbow to knock Reyes out cold.

There is no doubting the fact that Prochazka should be getting the next UFC title shot after Teixeira. The one frustrating part for Prochazka is the layoff that goes along with waiting for the next shot.

As mentioned, the title fight isn’t even scheduled until September. That would mean that Prochazka would not get his title shot until the very end of this year or early next year.

With that, what does Prochazka and the UFC do? Of course, he can choose to sit out and get the title shot. However, there is one fight that Prochazka has said he’s interested in that the UFC could put on in the interim.

That fight would be pairing Prochazka with Aleksandar Rakic (14-2). Rakic is ranked third in the light heavyweight division while Prochazka is ranked second. He’s 6-1 in the UFC and he’s also knocking on the door of a title shot. Perhaps the promotion books a title eliminator between the two men.