After falling short at UFC Vegas 43, what’s next for Michael Chiesa? 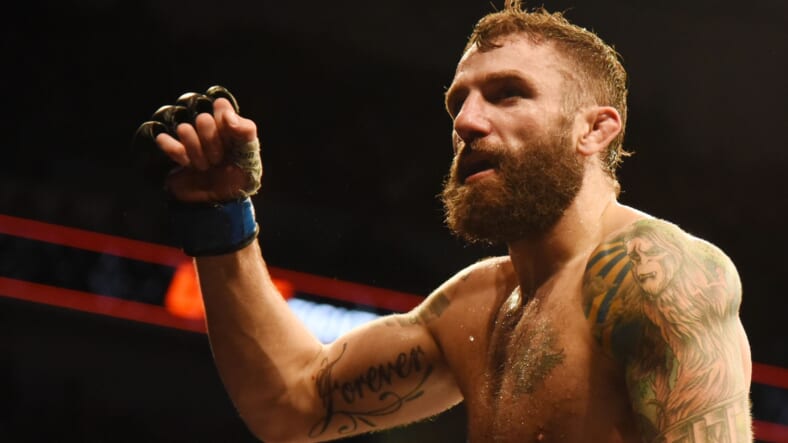 Entering the second half of 2021, Michael Chiesa (17-6) was in an excellent spot in the UFC’s welterweight division. The former top lightweight contender had been unbeaten since he made the jump to 170 pounds.

A perfect 4-0 start that included wins over former UFC champion Rafael Dos Anjos and a dominant win over the durable Neil Magny. This start earned him a shot against Vicente Luque back at UFC 265 in what some people considered to be a title eliminator.

Chiesa had some really good moments in the first round of that fight. However, he left his neck exposed and was submitted. He wanted a quick turnaround after that loss and the UFC booked him against the undefeated Sean Brady (15-0) this past weekend.

Throughout the fight, Brady was getting the better of Chiesa. It was a little surprising to see their grappling exchanges and I think even Chiesa was caught off guard. However, Chiesa did come on really strong in the final round.

That said, it wasn’t enough and Chiesa lost by unanimous decision at UFC Vegas 43. Now, after that perfect start at welterweight which had him in title contention, Chiesa is looking at a two-fight losing streak.

What’s next after UFC Vegas 43?

After losing to Sean Brady at UFC Vegas 43, it’s time for Chiesa to take a slight step back in terms of the competition. He needs a good reset that could see him take on a ranked opponent that sits outside of the top ten.

In looking at the welterweight division, there are a couple of names that jump out to me. However, there’s one name on the list that seems to be the perfect fit. That perfect fit would be “The Leech” Li Jingliang (18-7).

We just saw Li compete back at UFC 267 where he took on phenom Khamzat Chimaev. Li was completely steamrolled and choked out in the first round. However, that shouldn’t take away from how good and tough Li is. That should ultimately speak to how special Chimaev is.

Li and Chiesa would be a fantastic matchup for the UFC to make. Both men need a win to get back to fighting guys inside the top ten. This is the direction I would go if I was the match maker.