After falling short at UFC 281, what’s next for Michael Chandler? 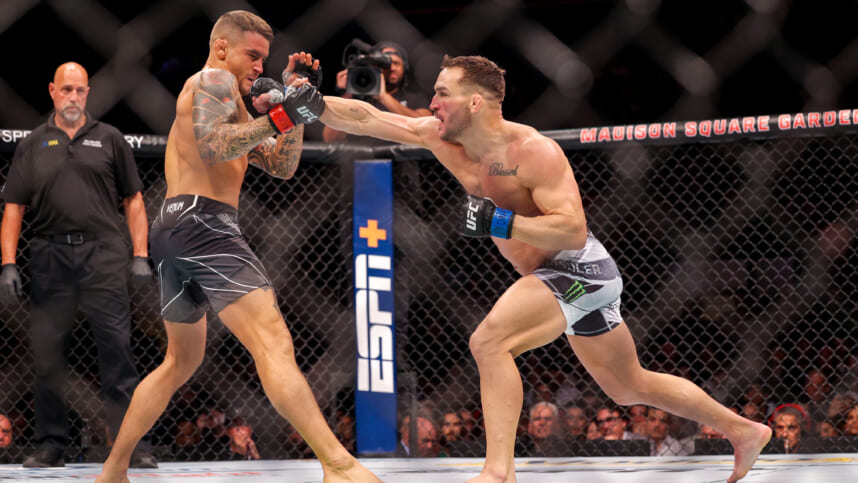 This past weekend at UFC 281, we saw a war in the lightweight division. Former interim lightweight champion Dustin Poirier (29-7, 1 NC) and former title challenger Michael Chandler (23-8) settled their beef inside the octagon.

Ever since Michael Chandler made his debut in the UFC, he has done one thing in his fights. That’s move forward with power and explosiveness like we’ve never seen in the lightweight division. Entering this bout, Chandler was 2-2 in the promotion, but his fights were must-see TV.

In the first round at UFC 281, he showed off why he’s a fan favorite. He blasted Poirier with huge shots up against the fence and had the former interim champion rocked. However, he was then rocked near the end of the first round himself.

In the second round, Chandler switched up the game plan and went to his wrestling. He dominated the second round with control. In the third round, things were likely square at one round a piece. Chandler hoisted Poirier in the air for a takedown.

However, when he slammed him, Poirier scrambled to Chandler’s back. He was able to lock in a rear naked choke and forced Chandler to tap.

Michael Chandler is now 2-3 in the UFC, but much like Nate Diaz, a loss doesn’t seem to impact his shine. Every one is going to tune into a Michael Chandler fight. He’s must-see television and whoever he fights next, fans will be watching.

That being said, who should he fight next? The perfect fight is the one fight that Chandler really wants. That fight would be him taking on Conor McGregor at 170 pounds. It would be a massive PPV headliner that fans all over the world would tune in for.

That being said, with no word on a McGregor return anytime soon, it might be safe to look at other opponents. So, who else is out there? I think a potential bout with Rafael Dos Anjos would be a lot of fun. Mateusz Gamrot could be another option for Chandler.