After dominant win at UFC 261, what’s next for Valentina Shevchenko? 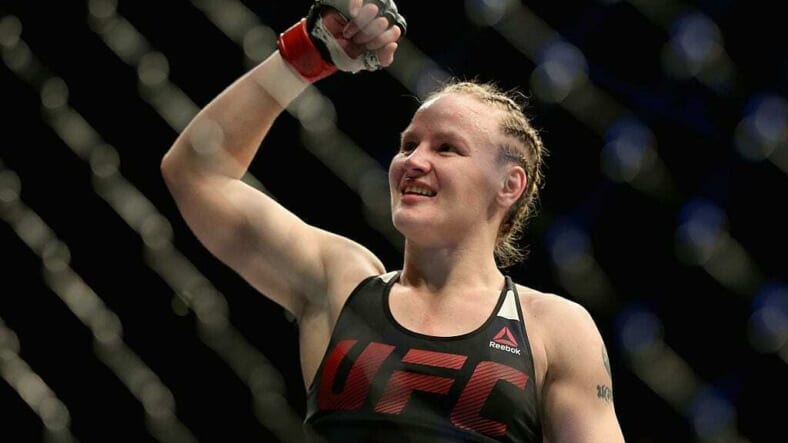 This past Saturday at UFC 261 we got to see a flyweight title fight that the world was intrigued by. The undisputed flyweight queen Valentina Shevchenko (21-3) defended her title against former strawweight champion Jessica Andrade (21-9).

Heading into the fight, the UFC and Dana White really hyped up the former strawweight champion to build interest. The thought was that the power and pure strength of Andrade could give Valentina Shevchenko problems she has yet to deal with.

However, let’s not forget that Shevchenko has fought 40 minutes with Amanda Nunes (21-4). Nevertheless, the UFC was building up Andrade was a truly formattable challenger for the title.

Well, on Saturday night, Valentina Shevchenko made a massive statement to everyone. Dana White said that Shevchenko fought like a demon at UFC 261 who was pissed off at everyone.

Shevchenko did what everyone said Andrade needed to do at UFC 261. She engaged Andrade in the clinch and in close quarters. However, Andrade couldn’t do anything and Shevchenko showed just how strong she is.

Shevchenko ragdolled the former UFC strawweight champion on Saturday night. There wasn’t one aspect of the fight that she didn’t dominate. In the second round, she secured the crucifix position off of a powerful takedown and got the TKO win.

At UFC 261, Valentina Shevchenko once again proved that there are levels to this game and nobody is even close to hers at 125 pounds. She’s so far ahead of the rest of these ladies it’s not even funny.

The thing that makes her so special is how well-rounded she is as a martial artist. She has elite striking, elite grappling and she’s stronger than most of the bantamweights on the roster.

The only person on the entire UFC roster that can compete with Shevchenko is Amanda Nunes. This is not an exaggeration or being a victim of the moment, but I truly believe that Shevchenko is the second greatest female mixed martial artist we’ve ever seen.

She is inches behind Nunes and if you have a hard time believing that, watch their second fight from UFC 215. Personally, I scored that fight for Shevchenko and if she would’ve won that split decision, she would be called the greatest.

In my perfect world, I would love to see the trilogy between these two ladies, but Dana White has dismissed that. In terms of the next contender at flyweight, there are a couple of upcoming UFC matchups to watch.

A few weeks from now, Katlyn Chookagian (15-4) takes on Viviane Araujo (10-2) at UFC 262. Then, in June, Lauren Murphy (14-4) takes on JoJo Calderwood (15-5). One of these four ladies will get the next crack at the champion. My only advice to whoever gets that shot is good luck because you’re going to need it.