After devastating finish to UFC London, what’s next for Tom Aspinall? 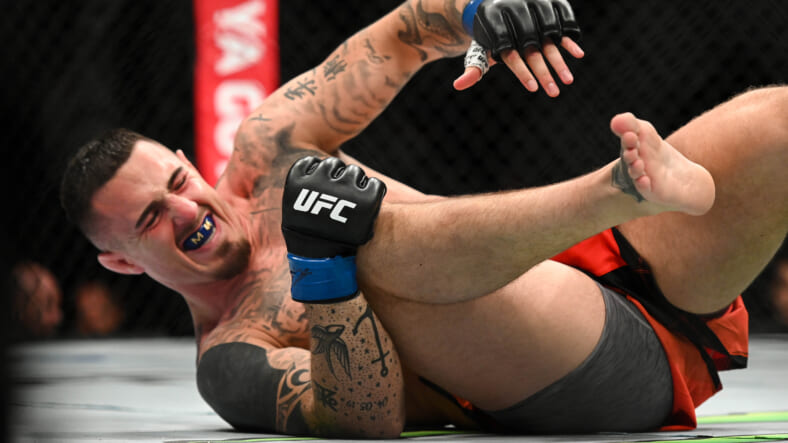 This past weekend in the main event of UFC London, Tom Aspinall (12-3) was looking to pick up the biggest win of his career. Aspinall was taking on Curtis “Razor” Blaydes (17-3, 1 NC) in Aspinall’s second straight London headliner.

Since joining the UFC, Aspinall has been unstoppable and he’s finished every opponent he’s taken on. His combination of high-level boxing and Jiu Jitsu along with his speed makes him a problem in the heavyweight division.

If he was able to defeat Blaydes, he would likely have entered a title eliminator in his next fight. However, tragedy would strike for Aspinall just seconds into his fight with Blaydes at UFC London.

The opening bell sounded and both men went right after the other throwing heat. Big combinations from both men and then Aspinall threw a leg kick. Upon the leg kick landing, Aspinall went down in a heap of pain gripping his knee. The fight was called off and Aspinall suffered his first UFC defeat by injury.

What’s next after UFC London injury?

You could not ask for a worse outcome if you’re Aspinall. Not only does the fight go down as a loss but he will likely be out for an extended period of time. Not what you want when you’re on the verge of challenging for UFC gold.

Now, the only positive for Aspinall is the fact that he’s relatively young. He’s 29-years-old and many don’t think he’s even reached his prime. Aspinall’s career took a major detour with this injury loss, but he’s still one of the best the UFC has to offer.

With that in mind, what should be next upon his return from injury? Well, he should go right back towards the top of the division. If he can return sometime in the first part of 2023, maybe look for him to take on the loser of Gane or Tuivasa.

Maybe even give him the loser of a title fight that happens in early 2023. Other options could be top contenders like Derrick Lewis or Chris Daukaus depending on how the next couple of months go. Either way, despite the loss and injury, Aspinall’s not losing his place amongst the UFC’s elite heavyweights.