After a brutal knockout loss at UFC Vegas 18, what’s next for Frankie Edgar? 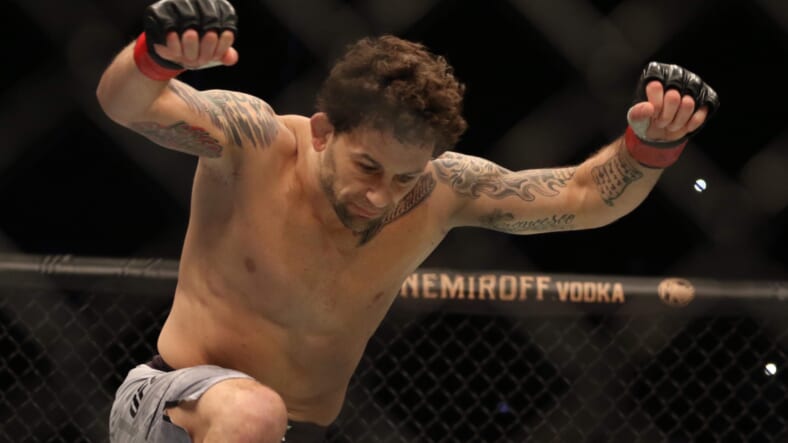 This past weekend at UFC Vegas 18, we saw a potential title eliminator in the co-main event of the evening. Former lightweight champion, Frankie Edgar (24-9-1), took on Cory Sandhagen (14-2). The winner was likely going to get the next shot at the UFC bantamweight title.

Leading up to the fight, I really liked Frankie Edgar in this matchup. While there was obviously a lot of hype surrounding Sandhagen, I liked the pace and pressure that Edgar was going to bring. I especially liked that style in the smaller cage. In the end, I thought he could get a decision win at UFC Vegas 18.

Boy, was I wrong about that one. Edgar did immediately start the fight by pressuring Sandhagen. With the smaller cage, it was going to be easier for Edgar to close the gap on the much taller Sandhagen. Sandhagen does his best work from distance.

Just 28 seconds into the first round, Sandhagen launched into the air with a beautiful flying knee as Edgar came in. The knee landed flush on the chin of Edgar and he was out cold. The former UFC champion fell face first in brutal fashion as Sandhagen celebrated his beautiful knockout win.

After years of competing at lightweight and featherweight, Frankie Edgar appears to be in his most natural weight class at bantamweight. While he was just one win away from a title shot, this is a brutal loss that’ll be tough to come back from.

Edgar has been finished by strikes before, but nothing quite like what happened at UFC Vegas 18. We’ve never seen him knocked out in that fashion. The former UFC champion turns 40 this year, and this is not what he needed to happen.

So what does the UFC do with Edgar next? I can’t see Edgar going out like that and I believe he will keep fighting despite the loss. Personally, the fight I would love to see him in next is a matchup with former bantamweight champion, Dominick Cruz (22-3).

Cruz makes his return to the UFC next month when he takes on rising contender, Casey Kenney (16-2-1). Should Cruz get the win there, I think it would be a great fight for the promotion to make. Perhaps a main event on a Fight Night over the summer.

Whoever would win that fight would be in a position for a final run towards a UFC title. While the loser might be ready to walk away from the sport. There are other options, but this is my favorite for The Answer.