Should the Yankees consider trading Miguel AndÃºjar and Clint Frazier to bolster their rotation? 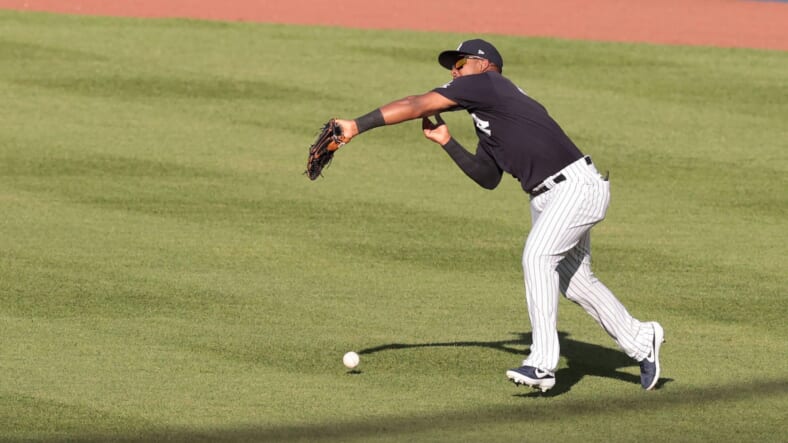 The New York YankeesÂ have optionedÂ Miguel AndÃºjar to an alternate training site along with Nick Nelson and Thairo Estrada. AndÃºjar started the season going 1-14 with no walks and three strikeouts. What most would consider a surprising move given AndÃºjar’s potential, there might be certain implications here behind the decision.

Interesting enough, the surprise demotion of Clint Frazier on July 25th is something else that left Yankee fans scratching their heads. Gary Sanchez and Brett Gardner both seem to have fallen asleep at the plate, and during a shortened season, there is no time to waste. Trade rumors have surrounded these two players, but mostly just speculation from the fanbase due to how many times they have both been sent down and then called back up.

One of the things Yankee fans have to look forward to is the development and progression of their young core. Gleyber Torres, Aaron Judge, Miguel AndÃºjar, Luis Severino, and even Frazier were all at one point looking to be the building blocks for the next Yankees dynasty. But with AndÃºjar not exactly being the model of consistency, Severino requiring Tommy John surgery before the 2020 season and Frazier’s defensive struggles, it might be time for the Yankees to reevaluate their options.

There are benefits to each of these destinations. But they all have one thing in common: Viable starting pitchers. A package deal including AndÃºjar and Frazier could send back a top pitcher to add to the Yankees rotation.

The Yankees would need to sell the farm in order to acquire Indians ace Shane Bieber, so even a package of AndÃºjar and Frazier might not be sufficient. A more realistic option could be Mike Clevinger, who posted a 13-4 record and a 2.71 ERA in 2019. A modified trade package including either AndÃºjar or Frazier, who could both start in the outfield, could be beneficial for both teams.

Detroit is another interesting destination. Being ranked the number five farm system in Major League Baseball by MLB.com, the Tigers have a similar problem that the Yankees are faced with. Filled up with young talent, the Tigers have multiple players that can be used as trade chips. Pitchers like Matthew Boyd, Casey Mize, and even in the future Matt Manning could all be capital the can be used to send to New York in exchange for AndÃºjar or and/or Frazier.

Texas could be another possible trade scenario. After acquiring former Cy Young winner Corey Kluber from Cleveland in the offseason, they could look to move one of their starters to put some bats in the lineup. A trade package of AndÃºjar and Frazier for a pitcher like Mike Minor, who’s name circulated in the most recent free agency period, could be mutually beneficial.

Just because Frazier and AndÃºjar have been bounced back and forth between the Majors and elsewhere, does not by any stretch mean that they’re scrubs. Both were top prospects at the time of their selection and have both shown flashes of all-star potential. Either they get their opportunity to perform for the New York Yankees, make a decision to maximize their value, and get something in return.