Remembering some of the best relievers in New York Yankees history 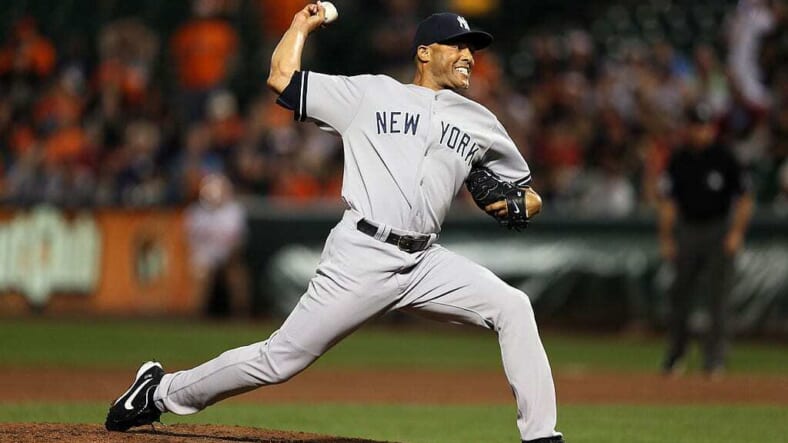 BALTIMORE, MD - SEPTEMBER 12: Closer Mariano Rivera #42 of the New York Yankees throws to a Baltimore Orioles batter during the ninth inning of the Yankees 6-5 win at Oriole Park at Camden Yards on September 12, 2013 in Baltimore, Maryland. (Photo by Rob Carr/Getty Images)

The New York Yankees have gotten excellent performances from relief pitcher over the years. A team that wins 27 World Series and advances to 40 will need a fantastic bullpen, dont you think? That is the case with the Bronx Bombers.

Of course, we all know who will be number one in every list that contains relievers in MLB, but since Bryan Hoch recently promoted the debate on behalf of MLB.com, we will discover who joins the great Mariano Rivera in a top five list of the best Yankees bullpen arms.

Righetti was the 1981 Rookie of the Year, and what a career he had. He pitched a no-hitter back when he was starting in 1983, but upon Goose Gossage departing as a free agent, he took the closer role.

With 223 career saves and a 2.96 ERA the next six years, you could say that the transition period was smooth.

Saves didn’t exist as a stat in Murphy’s days as a player, but per Hoch, he would have led the league four times between 1938 and 1942.

Murphy played on some excellent teams, winning six World Series. His manager Joe McCarthy summed up his career: â€œJohnny is one man I can always depend on.â€

Murphy was aces in the World Series, closing the 1936 and 1939 editions and compiling a microscopic 1.98 ERA.

Lyle was one of the most underappreciated performers of the seventies for the New York Yankees. He even won the Cy Young award in 1977 with a 2.17 ERA.

The Yankees decided to bring Goose Gossage in a multi-year pact, so Lyle was gone in 1978.

Hoch’s take: “One of the top relievers of the decade, Lyle was acquired from the Red Sox in March 1972 and recorded a 2.41 ERA (148 ERA+) in New York, tallying 141 saves and finishing 348 games. Featuring a slider-heavy arsenal, Lyle twice led the AL in saves and games finished, helping the Yankees to two titles. He detailed that wild tenure in a classic 1979 book, â€œThe Bronx Zoo.”

One of the most widely known looks in MLB, Gossage’s Hall of Fame plaque describes him best: â€œA dominant relief pitcher with a trademark moustache, whose menacing glare and exploding fastball intimidated batters for more than two decades.â€

In six years with the Yankees, Gossage went to four All-Star games and had a 2.10 ERA with 150 saves.

The best reliever ever to play the game, Mariano is also the only unanymous Hall of Famer. He is the historic leader in saves with 652 and finished his career with an unbeliveable 2.21 ERA.

He did all of that with one pitch: the cutter, or cut fastball, which he describes as a gift from God.

“The Lord blessed me and opened a door for me to become the New York Yankees’ closer,” Rivera once said last year. “We had 25 tremendous players, nine on the field and the others waiting on the bench to take action. I can never say that I accomplished [anything alone], because it would be impossible. We accomplished it through all 25 players, and that is the beauty about it.”