New York Yankees: The Cuban Missile is in midseason form 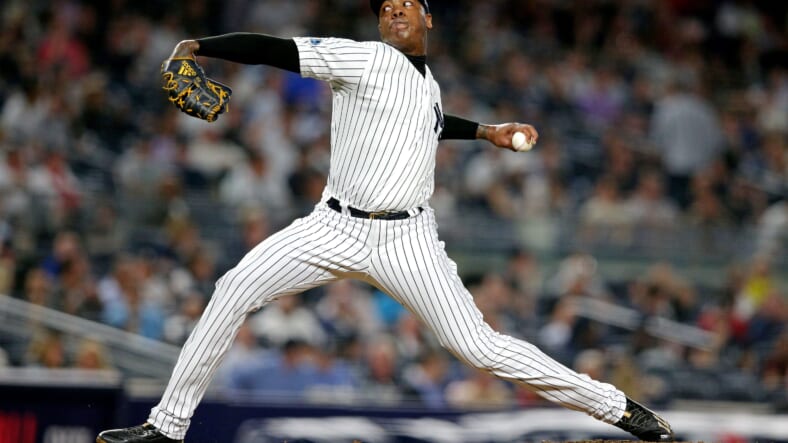 While MLB, health officials, politicians and the players’ association continue to dangle scenarios and ideas to bring baseball back, New York Yankees‘ closer Aroldis Chapman is taking advantage of the free time to work on his body and on refining his repertoire. His idea is to be ready whenever the actors described above decide that it is time to restart major league baseball.

And, thankfully, we get to see Chapman’s workouts and bullpens from his home. He has been uploading videos to his official Instagram account, @_thecubanmissile54, and to be fair, he already looks in midseason form.

The artist known as the “Cuban Missile” showed a glimpse of his lively left arm in his latest bullpen session last weekend, precisely on Sunday, from the sunny Florida. He looks great and showcased his trademark fastball and a very good slider.

Chapman had a fantastic 2019 season with the New York Yankees. He had a 2.21 ERA with a 2.28 FIP in 57 innings. As always, he was among the leaders in the American League when it comes to strikeout rate. He fanned 13.42 hitters per each nine frames.

The Yankees are counting on Chapman

The Yankees’ star reliever wants to leave October memories behind, and he is working for it. He made the last pitch of the 2019 season for the Bombers, and it ended up being a home run by Jose Altuve to eliminate the Yankees in the American League Championship series, in Game Six.

Chapman has been uploading several videos pitching and getting ready for the season. He has also been keeping his stamina up with boxing workouts, and he has been using Instagram to show fans.

While the coronavirus pandemic is still affecting the world, and most notably the United States of America, the Yankees are hopeful that baseball can return in June or July, which are the months that authorities are considering. For now, though, we have to keep waiting for a resolution.