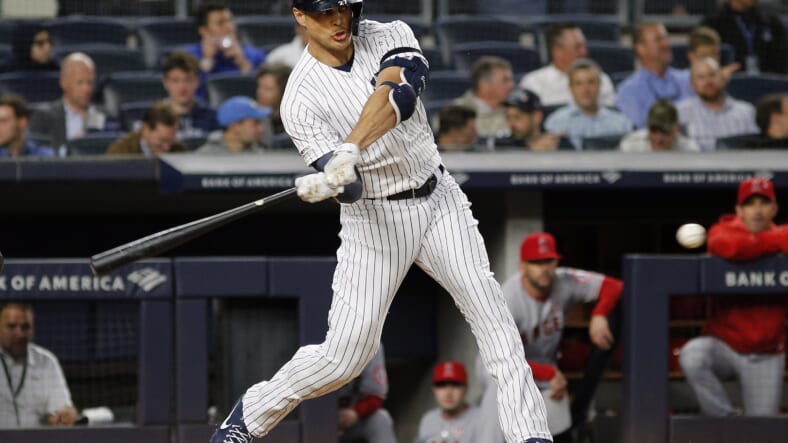 Because of the coronavirus crisis affecting the world and, most notably, the United States, MLB had to suspend the start of the 2020 season. New York Yankees‘ fans, as well as the other 29 teams, are currently waiting for an official resolution regarding the future of the season, if there is one. All parties are optimistic, though.

In the meantime, society, especially healthcare professionals, are doing everything they can to ensure that the virus stops spreading so quickly, in addition to treating patients in need.

Thankfully, people are helping within the limits of their own possibilities. Yankees’ outfielder Giancarlo Stanton is among them, as he is donating 15,000 reusable face shields to medical professionals in Southern California and New York.

As you probably know by now, face shields are a powerful barrier to prevent the virus from spreading with ease. The COVID-19, as it is also named, has killed thousands of people around the planet since its appearance late in 2019.

Each area, (Southern California and New York) will get 6,000 face shields. They will be distributed among several places and facilities. Stanton also promised 3,000 additional face shields in the near future, according to a report from MLB.com.

The Yankees’ slugger keeps working out

â€œIâ€™ve seen the growing needs of the healthcare workers,â€ Stanton told the New York Post. â€œIâ€™ve kind of been doing research and seeing what they need the most, what can benefit them through the long haul of this. I know theyâ€™ve had to exchange masks throughout the day, and with the limitation on masks in general, I thought it would be a smart idea to get those face shields to cut that number down.â€

Also in Stanton’s plans is directing some face shields to the Miami area, where he played eight seasons with the Marlins.

â€œItâ€™s wild, man,â€ Stanton said. â€œObviously, weâ€™ve never seen anything like this. It just seems like every new notification on our phones, or however we get our information, isnâ€™t positive. Youâ€™ve got to keep moving forward, see what you can do while staying at home.

â€œWhen there isnâ€™t any positive news out there, for me itâ€™s just trying to keep ready to go, keep a positive mindset, try to improve things, learn new things, better myself. Always. Thatâ€™s really all you can do.â€