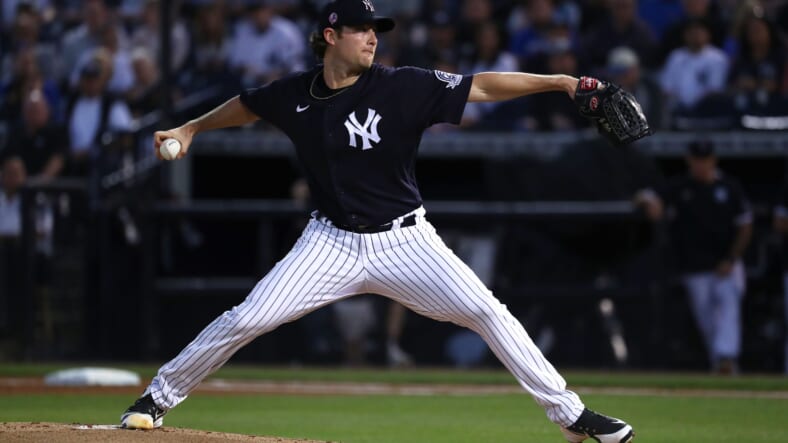 Prior to leaving the Pittsburgh Pirates in a trade to the Houston Astros before the 2018 season, Gerrit Cole was already a very good pitcher. However, after increasing the usage of his four-seam fastball and throwing it up in the zone, he unlocked another level and reached elite status. He also made a minor tweak in his changeup grip, and now, after two seasons with the Astros, the New York Yankees will enjoy him for the long haul.

â€œIt initially started in 2017 when I found that I was really inefficient when I was trying to throw strikes with the sinker, and sometimes it would slide off the plate or it would break too much, and I was really just trying to get count leverage in a lot of those situations, so I started mixing more four-seamers in,â€ Cole told YES Networkâ€™s Jack Curry and David Cone during spring training for a special episode of â€œYankees Access: Cole, Cone & Curry.â€

Cole told that when he went to Houston, “[pitching coach] Brent Strom was just such a great resource to the 70â€™s and 80â€™s, and maybe even late 60â€™s kind of style of Don Sutton, Tom Seaver, Drysdale, top of the zone kind of fastball, and he just, you know, he just encouraged me to chase that type of pitching.”

â€œIronically, throwing the four-seam more was easier for me. It was just, made my breaking balls more consistent and I found that even if you still locate the four-seam at the bottom of the zone, youâ€™re still apt to get a groundball in those situations. So, it cost me less, it made me more efficient because I could put guys away when I wanted to, instead of trying to induce contact and hoping that it didnâ€™t go to somebody.â€

The Yankees will enjoy a fully re-invented pitcher

The New York Yankees won a bidding war to land him after Cole’s contract with the Astros ended after last season.
Per Brooks Baseball data, cited by the New York Post, Cole threw his four-seamer 47.3 percent of the time in Pittsburgh. The number grew to 53.8 with the Astros. You can expect more of that with the Yankees.

Nolan Ryan helped him with the changeup upon arriving to Houston. â€œWell, Justin (Verlander) and I were talking to Nolan one day and we were showing him both of our changeup grips and I was just kind of asking, saying kind of, I would like to get a little more depth out of my changeup,â€ Cole told Curry and Cone. â€œHe was asking me about my grip and he saw that I really put my middle finger, kind of right through the center of the ball and thought that the middle finger, at least for him, was the finger that generated the most power and the index finger kind of steered the ball. So, he suggested, kind of what he did, which is where he offset the middle finger a little bit more to the inside of the ball so that he didnâ€™t quite get so much power coming through the pitch. But, you can still finish the ball with good snap, like you do on your fastball.â€

As a result, the current Yankees’ ace saw the whiff rate of his changeup go from 11.76 percent to 16.63 with Houston.
â€œI thought it helped,â€ Cole said. â€œIt certainly gave me more confidence to throw the pitch aggressively over the plate, â€˜cause I did notice that the velocity was more consistent, and as long as I got through the baseball, like I got through the baseball in my hand, or out of my fastball rather, I got an early commit to the pitch. So, it wasnâ€™t always, it had a good chance of having some success.â€

Thanks to these adjustments, the New York Yankees will enjoy arguably the majors’ best hurler for the foreseeable future.