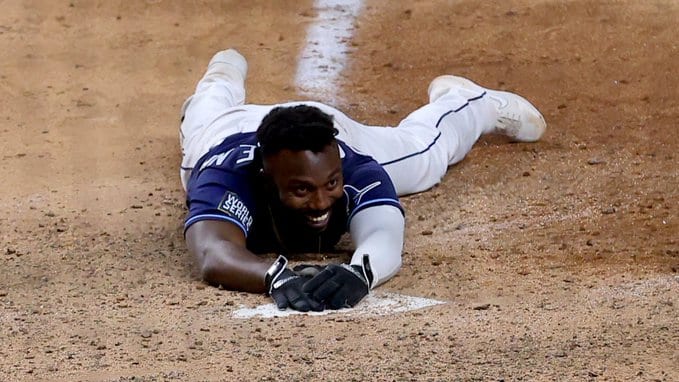 With the roof open at Globe Life Field, game four of the World Series continued between the MLB Los Angeles Dodgers and the Tampa Bay Rays, with the Dodgers up a game on the series.Â  In the very first inning, Justin Turner hit a home run to center for the Los Angeles lead in the game. Rays reliever Yarbrough closed out the inning but not before giving up that home run.

At the top of the third inning, Corey Seager hit another home run for the Dodgers to far center field, the second home run against the Rays opener Yarbrough. The New York Yankee killer Randy Arozarena hit his 9th home run of the postseason letting the Rays get on the board, Dodgers 2 and the Rays 1.

The Tampa Bay Rays getting on the board was just the beginning of a game that would have many emotional swings back and forth. The Dodgers used six pitchers, and the Rays used seven in the game. Neither starter went very far into the game, Julio Urias who had had a 0.56 ERA before the game, went only 4.2 innings, and the Ray’s Ryan Yarbrough only went 3.1 innings.

At the bottom of the fourth inning, Randy Arozarena hit his 9th homer of the postseason for the all-time record number of home runs in baseball postseason history. At the top of the fifth, the Ray’s, Muncy had an RBI single,Â  That was followed by a mammoth home run by Hunter Renfroe. Enrique Hernandez had an RBI double, and it was 3-2 Dodgers.

The real action didn’t start until the beginning of the sixth inning with the score at Dodgers 3-2. At the top of the frame, when the Dodgers tacked on another run. Dodgers 4-2. But at the bottom of the inning, the Rays picked up three runs, making it 4-5 Rays. At the top of the seventh, Joc Pederson with the bases loaded hits the biggest hit of his career, singling and putting the Dodgers back on top 6-5 in the seventh inning. At the bottom of the seventh, Kevin Kiermaier tied up the game with a homer to center for the 6-6 game.

The Los Angeles Dodgers took the lead back in the top of the eighth inning, and it would stay that way until the bottom of the ninth inning. That is when things got crazy. What then transpired made this Game 4 the signature game of the series. With two outs and two strikes in the ninth inning, Brett Phillips who wasn’t even on the roster in the ALCS, pinch-hit and laced a single to center field off Dodgers closer Kenley Jansen, bringing in the tying run, but Dodger centerfielder Chris Taylor kicked the ball. Randy Arozarena, who was on his way to second base, never stopped running after he passed third base he stumbling and fell to the ground, meanwhile Taylor was throwing the ball to home, but Arozarena got up and dashed home sliding into home plate, face first for the Rays, last-second win. The Ray’s manager Kevin Cash had this to say about the amazing end to the game.

“The moment the ball left Phillips’ bat, we knew we had a tie ballgame, and then everything that happened afterward, Randy’s not used to having to run like that,” Cash said. “Normally he’s used to just trotting. So it threw him off for a little bit getting tripped up there between third and home. But Phillips, man, give that guy a lot of credit. I don’t know when the last time he got an at-bat was. Pretty impressive what he just did against one of the game’s best closers.

“Happened so fast, I didn’t know what to do. Gave a bunch of hugs, just in disbelief.”

The final score was 8-7 Tampa Bay. Kenley Jensen took the loss for the Dodgers and John Curtiss the win for the Rays. The Rays scored seven of their runs with two outs.

The Tampa Bay Rays win ties up the series at two games apiece going into Game 5, on Sunday night. The game tonight will be a matchup of the Game 1 starters, Clayton Kershaw of the Dodgers against the Ray’s Tyler Glasnow. Whoever wins the game will put the other team in an elimination situation on Tuesday night, when the home field advantage switches back to the Dodgers. The game will be on the FOX Network.

The following video is the full bottom of the ninth inning.