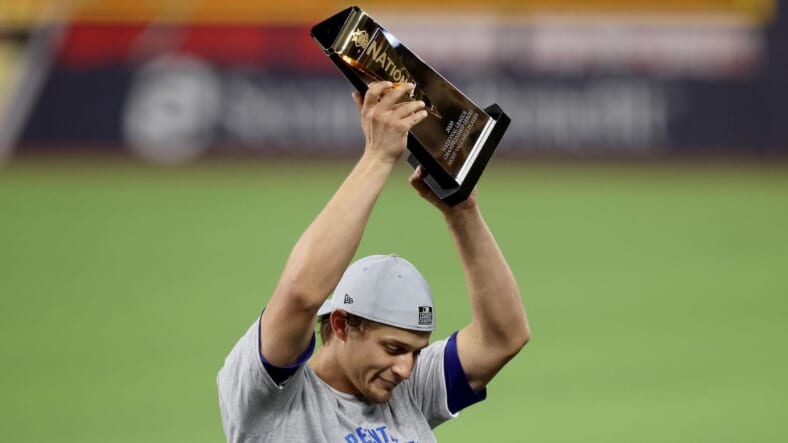 The roof was closed for game six of the MLB World Series between the Los Angeles Dodgers and the Tampa Bay Rays at Arlington, Texas. The Series was on the line for the Rays as the Dodger led the series 3 games to 2. The pitching matchup was Tony Gonsolin against Blake Snell of the Tampa Bay Rays. This was an elimination game for the Tampa Bay Rays.

Tony Gonsolin to the mound to win it all for the Dodgers. Gonsolin who was excellent in the regular season, going 2-2 with an ERA of just 2.31. However, he has been ineffective in the postseason and is 0-2 with an inflated 9.38 ERA. In his three games, two starts, he pitched 7 2/3 inning giving up eight runs. This is due to an October 15 game against the Atlanta Braves; he gave up 5 earned runs in 4.2 innings. In the very first inning, he gave up a homer to possible MVP Randy Arozarena, Arozarena’s tenth homer of the postseason.

Blake Snell took the mound in an attempt to force a game seven on Wednesday night. Snell in the postseason is 2-2 with an ERA of 3.33. In the Wild Card round, he won his game against the Toronto Blue Jays, in the ALCS, he split two games with the Houston Astros, and in the second game of this World Series, he won against the Los Angeles Dodgers, giving up two runs in 4.2 innings. With Snell on the mound, the Rays bullpen will come into play. Snell seldom went more than five innings in most games.

Snell made it to the start of the six-inning keeping the Los Angeles Dodgers scoreless before being replaced by Nick Anderson after giving up a single to Austin Barnes. Anderson gave up a double to Mookie Betts as Barnes went to third on the long double to the left-field wall. Justin Turner at the plate. Anderson threw a wild pitch, and Barnes scored, tieing the game at one apiece. On a fielder’s choice, Betts came home for the Dodger 2-1 lead.

Turner hit a long one that looked out but was caught for the second out of the inning. Loup came in to close out the inning for the Rays. Brusdar Gaterol started the top of the seventh, replacing Victor Gonzalez, for the Dodgers. He got two quick outs but gave up a single and was replaced by Julio Urias. Urias, a starter for the Dodgers, got Yanky Diaz to strike out and maintain the Los Angeles Dodgers 2-1 lead.

At the bottom of the seventh, Pete Fairbanks took over for Loup and gave up a double to Will Smith. Cody Bellinger skied out for the first out.Â  Chris Taylor struck out, and Joc Pederson pinch-hitting was walked intentionally to get at Austin Barnes. Barnes flew out to Lowe to end the inning. With the score at 2-1 Dodgers, Randy Arozarena was first up for the Rays at the top of the eighth inning with Julio Urias still on the Dodgers’ mound. Arozarena flies out to Bellinger. Urias got Meadows out, and Brandon Lowe struck out, ending the Rays’ hopes in the eighth.

At the bottom of the eighth, with Fairbanks still on the mound, Mookie Betts homers to centerfield to increase the Dodger lead to 3-1. Corey Seager walked. Hernandez struck out. Fairbanks was replaced by Ryan Yarbrough with one on and one out. Max Muncy hit into a double play, and the inning was over. With the score at 3-1 Dodgers, it was last licks for the Tampa Bay Rays.

At the top of the ninth inning, the Dodgers just had to get 3 outs to win their first World Series since 1988. Julio Urias still in there got Manuel Margot popped out to Mookie Betts for out number one. Mike Brosseau pinch-hitting stuck out for out number two. With the Dodgers one out away, Willie Adames held the Rays hopes with his bat, Adames, but he stuck out for out number three, and the 2020 World Series was over. The Los Angeles Dodgers have their first World Championship since 1988.

It was a great baseball season for the Tampa Bay Rays, but in this coronavirus season that will go down in the baseball history books the Los Angeles Dodgers were victorious. It was the seventh title for the Dodgers, their sixth since moving to Los Angeles from Brooklyn in 1957, and the first for Dave Roberts as manager. The final score was Dodgers 3 and the Tampa Bay Rays 1. The winning pitcher was Victor Gonzalez and the loser, Nick Anderson.

In the award ceremony following the game, the Commissioner of Baseball Rob Manfred was heavily booed as Clayton Kershaw, who has had a World Series ring evade him, manager Dave Roberts, and all the Los Angeles Dodgers celebrated on the field. Corey Seager won the MVP Award for his play in the postseason.