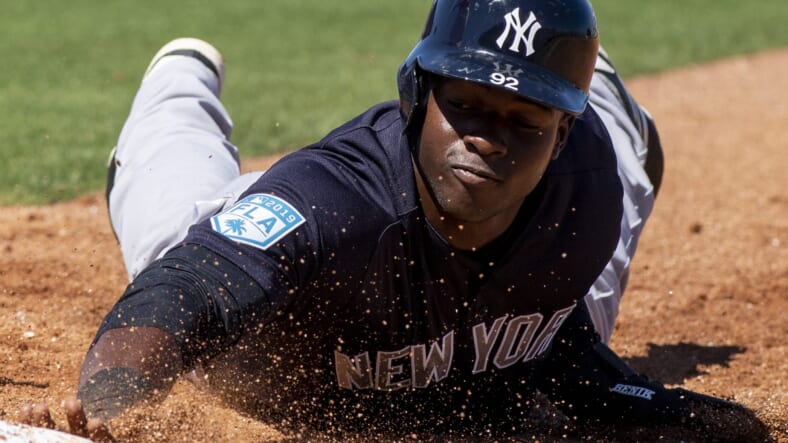 For years, the New York Yankees have had an elite center field prospect in Estevan Florial. The kid can run like the wind and when he does make contact, it is usually powerful. He is a good fielder in center and has a fantastic throwing arm. Basically, you could say he has, comfortably, four above-average tools.

The fifth one, the one he is currently lacking, is perhaps the most important: hitting. Estevan Florial has issues making consistent contact and having decent batting averages, especially in the last couple of seasons in which he has been injured.

Injuries and strikeouts are a problem. And despite his still relatively young age (22,) the lefty-swinging outfielder has a lot to prove before the New York Yankees can picture a future with him being a fixture in the lineup.

Florial has five pro seasons to his name, and in four of them, he has had 325 or fewer at-bats, per NJ.com. Over the last three seasons, he has a .253 average and 229 strikeouts in 644 high-A at-bats. His spring training numbers are also disappointing.

The Yankees’ center fielder of the future?

NJ.com spoke to a veteran scout who has been following Florial for several years now. His report wasn’t very encouraging.

â€œitâ€™s ridiculous to say Florial isnâ€™t still a prospect. Is he a major concern at this moment? No. But if youâ€™re the Yankees and watching his progress and how his injuries may have affected him â€¦ heâ€™s falling to the Greg Bird routine.â€

â€œYou have to play,â€ added the scout, who asked to remain anonymous. â€œYou have to be healthy. I hate to say this, but some players are brittle. Some players can sneeze and blow their backs out. And then when an organization decides time has run out on a player, they end up going somewhere else and sometimes become a star.

â€œThe positive is Florialâ€™s only 22 years old. Also, heâ€™s not had major, major injuries, and heâ€™s regrouped. And Iâ€™ve seen his tools. When he makes contact, the ball jumps off his bat. You see the rangy, athletic actions going back on the ball. You see the ability.â€

Florial’s star has fallen so much that 17-year old Jasson Dominguez is now viewed as the New York Yankees’ center fielder of the future.

â€œSometimes you run out of time and sometimes other prospects come in and bypass you,â€ the scout said. â€œJasson Dominguez has passed Florial, but a lot of things can happen. Weâ€™ve seen it already with Florial. Letâ€™s wait and see how this plays out.â€