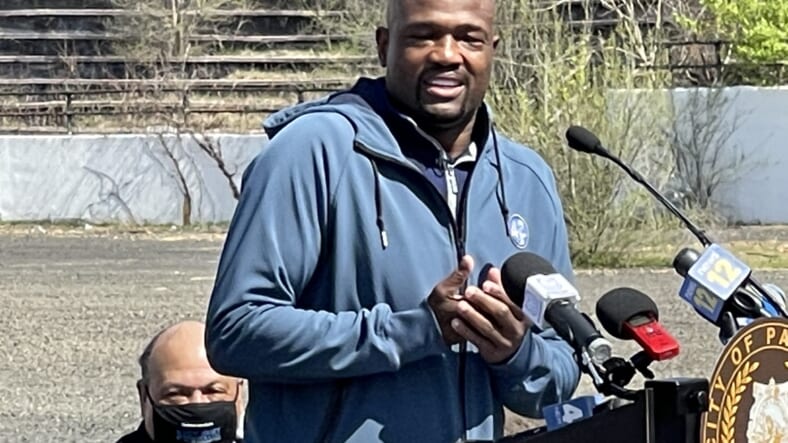 After years of false starts and broken promises, a New Jersey landmark to American perseverance and strength will finally see its story told and legacy preserved.

Baseball legends and community officials descended upon Hinchliffe Stadium on Wednesday to officially break ground on renovations for the Paterson staple. The landmark on Liberty and Maple Streets in Paterson played host to local events like high school football and baseball but is perhaps best known for hosting Negro League baseball games. Hinchliffe is one of two former Negro League stadiums still standing, the other being Rickwood Field in Birmingham.

Ceremonies were hosted by Paterson Mayor Andre Sayegh with numerous local baseball celebrities in attendance. Larry Doby Jr., the son of the late Baseball Hall of Famer, was among the speakers, as was MLB All-Star Harold Reynolds. Renowned names from MLB’s New York Mets and Yankees sat in the audience, including Omar Minaya, Willie Randolph, and CC Sabathia.

“There have been so many different false starts, but even coming off a pandemic, being able to get this project off the ground, seeing everybody out here, it’s real now. I’m so happy for the city of Paterson” Sabathia, a former Yankees pitcher (2009-19), told ESM. “The legacy of the Negro Leagues and Larry Doby lives on.”

A hopeful theme amongst the speakers and attendees was hope that the stadium could be used by the youth of the future. One of the most popular events held at Hinchliffe was the annual “Turkey Bowl” gridiron showdown on Thanksgiving Day between Eastside and Kennedy High Schools.

“Being involved in refurbishing a facility where kids can come out and play baseball and be proud of their neighborhood, that just hit him for me,” Randolph, a former Yankees second baseman (1976-88) and Mets manager (2005-08), told ESM. “History is so important, and a lot of kids don’t know the history. There can be exhibits and things of that nature to teach the kids. The coaches will be informed on how to converse with the kids on what it is. When these kids understand what it is, that’s when they’ll get involved in it.”

Hinchliffe Stadium originally opened in 1932 and became well-regarded for hosting Negro League baseball games during the Jim Crow era. Though it built a legacy as a hallowed baseball ground, particularly for disenfranchised athletes, the stadium has sat in a state of drastic disrepair and neglect under the ownership of the Paterson Public Schools. The stadium has sat in relative squalor since 1997, with many prior renovations falling by the wayside through unfulfilled promises.

An additional $20 million in tax credits approved by the state government led to shovels in the dirt on Wednesday. The event was also allowed to commence through awareness and grant writing efforts created by groups like the Friends of Hinchliffe Stadium.Â

Its most renowned contribution to the history of the national pastime was perhaps hosting the professional tryout of Baseball Hall of Famer and Paterson resident Larry Doby, who later broke the American League’s color barrier with the Cleveland Indians in 1947. The date was of the ceremony was chosen to coincide with 14, the number Doby wore during a majority of his 13-year MLB career, which also ran through Chicago and Detroit. It has since been retired by the Indians. Doby was enshrined in the Baseball Hall of Fame in 1998, five years before his passing.

The plans for the stadium also call for the construction of a new visitor’s center as well as a parking facility and housing.

A mural paying tribute to Larry Doby stands just outside of the stadium, as seen here in 2020 (Photo: Geoff Magliocchetti)

Between the statistical development and real, verifiable promises and commitments being bestowed to the Paterson landmark, the baseball stars in attendance hope the stories of the Negro League’s heroes can finally gain a wider scale.

“We know the Jackie Robinson story and obviously, it’s a huge impactful story, we wouldn’t be here if it wasn’t for him. But more stories need to be told,” Sabathia said to ESM. “The New York Black Yankees, the New York Cubans, the Newark Eagles. Let’s tell all those stories and take about some of the greats that maybe didn’t make it (to MLB). I think there are so many different avenues to express what the Negro Leagues was. This is a great start.”

For more on Hinchliffe Stadium, check out Geoff Magliocchetti’s Four Part Series on the facility below…