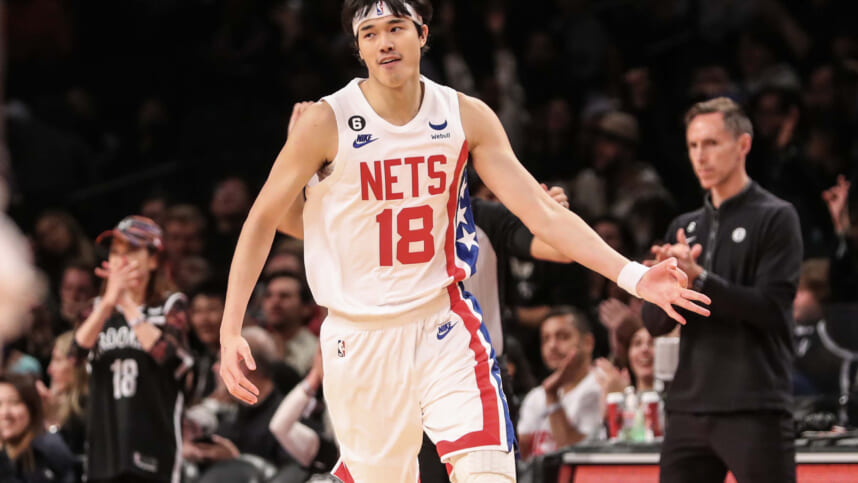 With 40 seconds left in the game and the Brooklyn Nets holding to a precarious five-point edge, Indiana Pacers’ cornerstone Tyrese Haliburton made his move.

Haliburton escaped Kyrie Irving’s defense by using Chris Duarte’s screen and started darting toward the rim. But Yuta Watanabe, who played a season-high 9:23 in the fourth quarter, held his own as he raised his left hand throughout the play. Haliburton badly missed the rim despite using the glass as Watanabe’s defense forced him to throw his shot higher.

The Nets escaped with an emotional 116-109 win Monday night to an ovation at the Barclays Center.

It was a much-needed win after a tumultuous weekend that saw them lose to the same rebuilding Pacers team last Saturday and Kyrie Irving creating a firestorm by tweeting a link to an antisemitic film.

Watanabe was the unsung hero, playing 22 minutes, the most among reserves, as he stepped up big for Ben Simmons, who was out with a sore left knee.

“That’s what it’s going to take — everyone having that pride. We certainly didn’t see that the last game. They’re getting baskets of one on one situations and [Monday night], we had a much better job of that. Joe (Harris) was great. Yuta (Watanbe) made some big stops and obviously, I think everyone took a turn and kind of defending their man and one on one situations.”

Watanabe finished with only five points and two rebounds and even had the worst plus-minus in the team with -16. But those numbers do not tell the whole story.

The Japanese-born forward seized the opportunity when it presented itself.

“Well, we always really liked [Watanabe]. You know, he’s a basketball player. He’s got good size and length for the wing. He can handle and pass. He can make shots and he’s a smart defender. I thought he did a good job.

He knew the scouting report, which was great and you could see him use that to his advantage on one on one situations and I think he adds dimension to our team as we’re here trying to get bodies back in the lineup. It’s really important to have players like that who could step in and do multiple things.”

Watanabe went viral last season when Minnesota’s rising star Anthony Edwards put him in a poster. While he became a meme for being at the receiving end of a vicious dunk, it was also symbolic of his fearlessness — his ticket to the NBA from a nation more known for soccer than basketball.

A former three-star recruit, Watanabe was dubbed in Japan as “The Chosen One” but he went undrafted in 2018.

A two-time All-Defensive team member and a former Atlantic 10 Defensive Player of the Year, Watanabe barged into the NBA in the only way he knows — hustle and defense.

Durant credited the Raptors for Watanabe’s development into a solid NBA role player.

“Yuta knows how to play the game of basketball and played with Toronto. You know [the Raptors] do a good job individually developing players on both ends of the ball, just the IQ for the game and you can tell that he’s learned from them. So he might not be a big name but he’s been putting in work the last couple of years. So it’s good to see him go out there and play well for us.”

Simmons’ continued absence could open up a larger role for Watanabe moving forward. A player who is on a non-guaranteed deal might become the steal of the summer for the Nets.