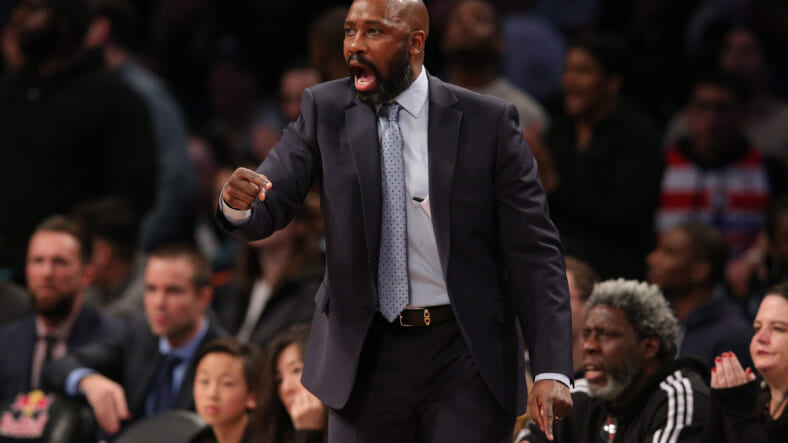 Among the many storylines surrounding the Brooklyn Nets is their head-coaching future. Jacque Vaughn took over as interim head coach after Brooklyn and Kenny Atkinson parted ways in March.

Vaughn coached two games before the NBA season was suspended and will be traveling to coach the Nets in Walt Disney World later this month. According to ESPN’s Adrian Wojnarowski, Vaughn could be roaming the Nets’ sidelines beyond the summer festivities.

On the latest edition ofÂ “The Woj Pod,” Wojnarowski said he’d take Vaughn “against the field” to be the Nets head coach next season.

â€œHeâ€™s the head coach. They didnâ€™t make him interim coach. I think the Nets are considering the possibility of a search, but I would still give Jacque Vaughn â€” I would take Jacque Vaughn against the field right now.â€

Prior to his head-coaching promotion Vaughn was an assistant under Atkinson for three and a half seasons, the head coach of the Magic from 2012-15 and an assistant coach under Gregg Popovich with the San Antonio Spurs from 2010-12.

The Nets have been connected to other coaches around the league such as Tyronn Lue, Tom Thibodeau, Mark Jackson and Jeff Van Gundy, among others.

Forward Wilson Chandler and center DeAndre Jordan have opted out of the NBA season, and big man Nic Claxton is out for the season with a shoulder injury. The Nets signed guards Tyler Johnson and Justin Anderson. Jarrett Allen recently discussed the challenges of players living in the NBA bubble and his role in the Nets rotation with the aforementioned players absent.

The NBA regular season is scheduled to resume on July 30.