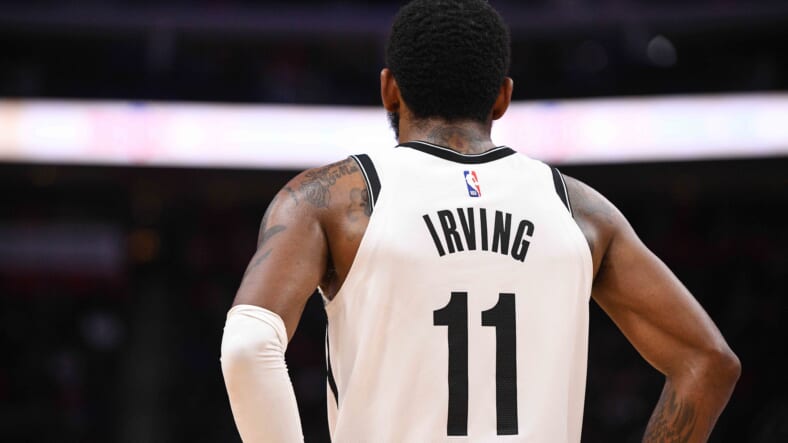 The Brooklyn Nets have had enough of the Kyrie Irving questions.

Less than 24 hours after a tough preseason loss to their Eastern Conference rival Philadelphia 76ers that were missing seven players, including Ben Simmons, the Nets officially put to rest Irving’s status with the team.

“Given the evolving nature of the situation and after thorough deliberation, we have decided Kyrie Irving will not play or practice with the team until he is eligible to be a full participant,” Nets general manager Sean Marks said in a statement. “Kyrie has made a personal choice, and we respect his individual right to choose. Currently, the choice restricts his ability to be a full-time member of the team, and we will not permit any member of our team to participate with part-time availability.”

“It is imperative that we continue to build chemistry as a team and remain true to our long-established values of togetherness and sacrifice. Our championship goals for the season have not changed, and to achieve these goals each member of the organization must pull in the same direction. We are excited for the start of the season and look forward to a successful campaign that will make the borough of Brooklyn proud.”

A strongly-worded statement sent a clear message to Irving: get vaccinated or stay away from the team.

Under the current mandate in New York, Irving, if he remains unvaccinated, would be ineligible to play for Brooklyn in their 41 homes games and two road games against the New York Knicks. The Nets don’t want a part-time player.

While Marks said it was a collaborative process involving the players and Irving and his people, he and team governor Joe Tsai ultimately made the tough decision.

“It’s what’s best for the organization at this point in time,” Marks said. “We had everything on the board. We look at everything. When you make a decision like this, it’s one that you don’t want to do hastily. Again involve all the parties. Think about all the variety of outcomes. I think we all know what are our objectives this year and how a decision like this may be able to affect that.”

The Nets made the tough decision of losing a player of Irving’s caliber in a season where they are the overwhelming favorites. Irving’s absence or even his presence on away games makes their title hopes combustible.

The mercurial guard has left the Nets with no choice but to put their foot down.

“Kyrie made it clear that he has a choice in this matter. And it’s ultimately going to be up to him where he [would go from here], what decides. We respect the fact that he has a choice and he can make his own right to choose. And again, what’s best for the organization is the path that we’re taking.”

“Without a doubt, losing a player of Kyrie’s caliber hurts from a talent perspective. No question. I’m not going to deny that but at the end of the day, our focus — our coaches’ focus, our organization’s focus — needs to be on those players that are going to be involved here and participating fully.”

Marks clarified that Irving would only lose out paychecks on their home games. Irving stands to lose roughly $380,000 per game that could reach up to $17 million.

When asked how Irving received the decision, Marks doesn’t want to second guess his star player’s feelings right now. He said he would let Irving and his teammates address the decision in their own words and at the right time.

The Nets general manager hopes that the decision will somehow put the issue to rest, and they move on with the season.

“We have goals and aspirations to go and achieve out there. I don’t think we want to be focused entirely on an individual that is not with the team right now,” Marks said.

Will it be the case? The media won’t stop asking questions about Irving’s whereabouts and updates.

Will Irving finally relent and get the vaccine? Will the Nets trade their superstar guard? These would be the subsequent speculations that will bug the team.

Marks hopes it would not reach a point of no return where he would have to pull the trigger on a trade involving Irving.

“This is pretty raw, pretty fresh. We’ve got to let the dust settle. The hope is we have Kyrie back,” said Marks but with a caveat.Â “We’ll welcome him back in open arms under a different set of circumstances. So we need to wait and see how that transpires.”