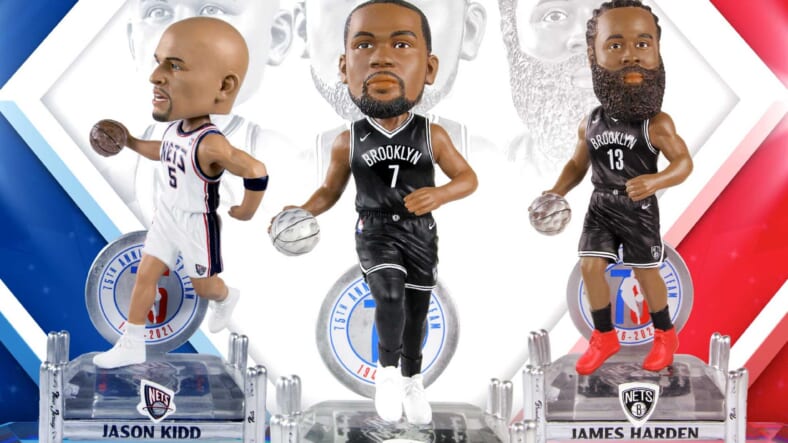 Whether you are an OG fan who rooted for the New Jersey Nets in East Rutherford or a new breed of a fan when they moved to Brooklyn, there is a bobblehead collectible for you.

A 10-time NBA All-Star, Kidd spent seven seasons with the New Jersey Nets and led them to two NBA Finals appearances in 2002 and 2003. Durant and Harden are part of the team’s current superstar trio. Oddsmakers have installed them as the favorites to win the title this season.

All three Nets players were recently named to the NBA’s 75 greatest players.

Each bobblehead stands on a diamond-themed base with the Nets logo front and center and an NBA 75th logo behind them while holding a diamond basketball.

Kidd’s bobblehead sport the throwback Nets home jersey of the 2000s. Durant and Harden are clad with the classic black and white Brooklyn jersey.

They are being sold on FOCO’s official website for only $75 each. The bobbleheads are limited to just 275 individually-numbered units making them a sought-after collectible.