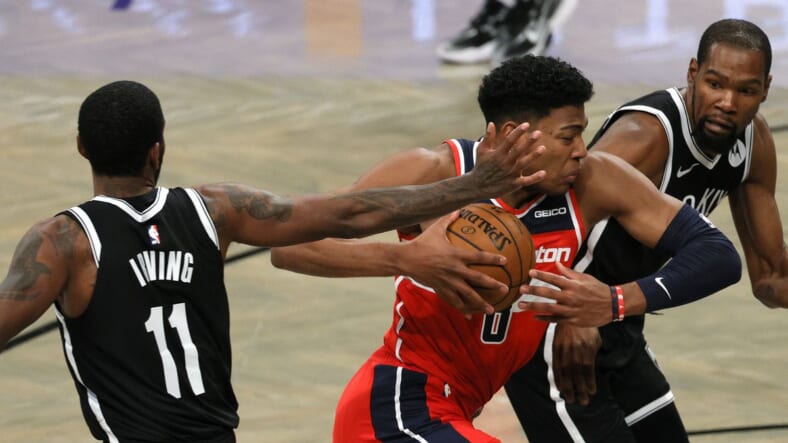 For the first nine minutes and 27 seconds of the preseason game between the Brooklyn Nets and the Washington Wizards last Sunday night, the world saw a glimpse of the Kevin Durant-Kyrie Irving potential.

The 119-114 final scoreline in favor of the Nets didn’t tell the whole story.

Worth the long wait

It was a long wait for the Nets, who signed both superstars to separate four-year deals as the culmination of the reclamation project of GM Sean Marks in Brooklyn. But definitely worth it.

Started from the bottom, the Nets have gone a long way, morphing from a team with no cap space into a fringe playoff contender and now a serious title threat in the NBA.

In that glorious stretch in the opening quarter, the long recovery of both Durant and Irving from serious injuries was an afterthought. Irving’s contentious relationship with the media was sidetracked. James Harden was never needed.

Durant dusted off anxious moments and shrugged off nervousness with a baseline dunk for his basket since tearing his Achilles back in June of 2019.

The former MVP was back to his silky-smooth ways scoring 11 points on 3-of-3 shooting, while Irving’s court wizardry produced 12 points on 5-of-6 shooting. The Nets were in full control with Durant and Irving on the floor. They opened up a 12-point lead, 30-28, that ballooned to as many 26 points.

‘I was anxious, nervous’

It didn’t matter the Wizards tried to come back when Durant went out for good in the third quarter while Irving didn’t see action in the second half. What mattered was they showed it’s really worth the wait.

“I was anxious, nervous. I visualized this moment for so long — nine, 10 months of thinking about how it would be, this next phase of my career,” Durant said postgame. “I felt like I was chomping at the bit, especially once COVID hit because I didn’t see a future — when the season was going to start in the future. I was going through it.

“So to go through this felt solid.”

He looked confident in his first game back.

Irving led the Nets with 18 points on 7-of-9 shooting despite sitting out the whole second half.

â€œThatâ€™s one of the perks of this position, is you get to coach two incredible players,â€ said first-time head coach Steve Nash. â€œKy was super sharp and Kevin, after such an extensive layoff was very good and close to being incredible.â€

“When you have that type of injury,” Nash said of Durant after the game, “it is kind of remarkable he’s at the level he’s at.

“It’s amazing. This is an injury that very few people have conquered, so to speak. It’s beautiful to see him back on the basketball court. I think the world missed him — I certainly did.”

Without Durant and partially Irving (shoulder injury), the Nets were still able to contend for the last playoff spot in the East.

This season, they are expected to contend for the title.

But that will hinge on Durant and Irving’s fragile bodies to hold up for the condensed season.

James Harden could be their insurance. But if there’s anything their first preseason game revealed aside from the Durant-Irving dominance, the Nets also saw the depth they will potentially miss if the Houston Rockets’ superstar gets his wish.

The Rockets have maintained they do not want the Nets’ complimentary players plus picks, per ESPN report. They may need a third team where the Rockets can get a young star.

But Marks have earlier remarked that the Nets don’t want to mortgage their future for Harden. Durant, on the other hand, denied recruiting Harden.

The Nets, who played without young rising star Caris LeVert due to patella contusion, had four more players in double figures aside from Durant and Irving.

Spencer Dinwiddie had 10 points and seven assists. Newcomer Landry Shamet, acquired via Draft Day trade, his 3 of 5 from the outside to finish with 13 points. Taurean Prince and Timothe Luwawu-Cabarrot each added 11.

The Nets and their star point guard were fined $25,000 each for the media blackout to which he responded with a controversial Instagram:

“I’ve had enough of someone else propaganda… I pray we utilize the ‘fine money’ for the marginalized communities in need, especially seeing where our world is presently… I do not talk to Pawns. My attention is worth more.”

Irving addressed them in his first media session, denying it was directed to NBA writers.

“It’s really just about how I felt about the mistreatment of certain artists when we get to a certain platform of when we make decisions within our lives to have full control and ownership… We want to perform in a secure and protected space,” he said.

He also retracted his earlier statement on Durant’s podcast that he really didn’t see them having a coach.

“Steve’s been amazing,” Irving said Monday. “He kind of commands the respect. I think I’ve got to take back my comments in terms of the head coach back a few months ago. But it’s just like, man, we have such a great synergy. Everyone feels like we’re coaching one another to be better, so I’m grateful for that.”

If their first game together is any indication, the synergy looks great. Credit it to Nash for not having a big ego and having the right temperament to handle the issue that could have otherwise gone south.

While the Nets are off to a good start, their title hopes still hang in the balance of their superstars’ fragile bodies and egos.