Heading into the 2021-22 season, the expected starter at center for the New York Knicks is Mitchell Robinson, but don’t rule out the scenario where Nerlens Noel makes a mad dash at the job himself. Noel was a godsend for the Knicks last season for a variety of reasons, but none more important than his defensive attributes that lead him to his most productive year yet.

According to Michael Scotto of USA Today, the defensive-minded big man will have his fair shot at the starting gig:

In bringingÂ Nerlens NoelÂ back, I was told Nerlens wasnâ€™t promised the starting center spot, but heâ€™ll have a chance to compete for it, and heâ€™ll definitely play meaningful minutes in New Yorkâ€™s rotation.

The Knicks think so highly of Noel, they rewarded him with a three-year, $27.7 million deal this off-season. Considering he’s earning about 10-times as much as Robinson going forward, the only realistic assumption is that he will be gunning for starting minutes. However, Robinson has a heroic return planned, with the Defensive Player of the Year award as his primary objective.

Robinson has been vocal about his increase in muscle mass, which should provide more physicality in the paint against power forwards and scoring centers. Nerlens, though, averaged 2.2 blocks per game last season over 64 games.

The 3-year veteran is capable of even higher block percentages, recording 2.4 during his rookie season in 2018. Since then, he hasnâ€™t played in over 61 games in a season, featuring in just 31 last year before suffering a broken hand. Shortly after his return, Mitch fractured his foot, ending a hopeful season prematurely.

Last yearâ€™s numbers saw him post 8.3 points, 1.5 blocks, 8.1 rebounds, and shoot 65% from the field. He played a career-high 27.5 minutes before the injuries began to take over. He has a clear-cut path to be the Knicks’ primary big man, but his success relies entirely on health. Robinson has the tangible traits and capabilities to be a fantastic center in the NBA, but he just needs to remain healthy and available. Noel proved to be a warrior last year, and thereâ€™s no question he will give Robinson a run for his money, which could end up being a positive factor to bring out the best in both players. 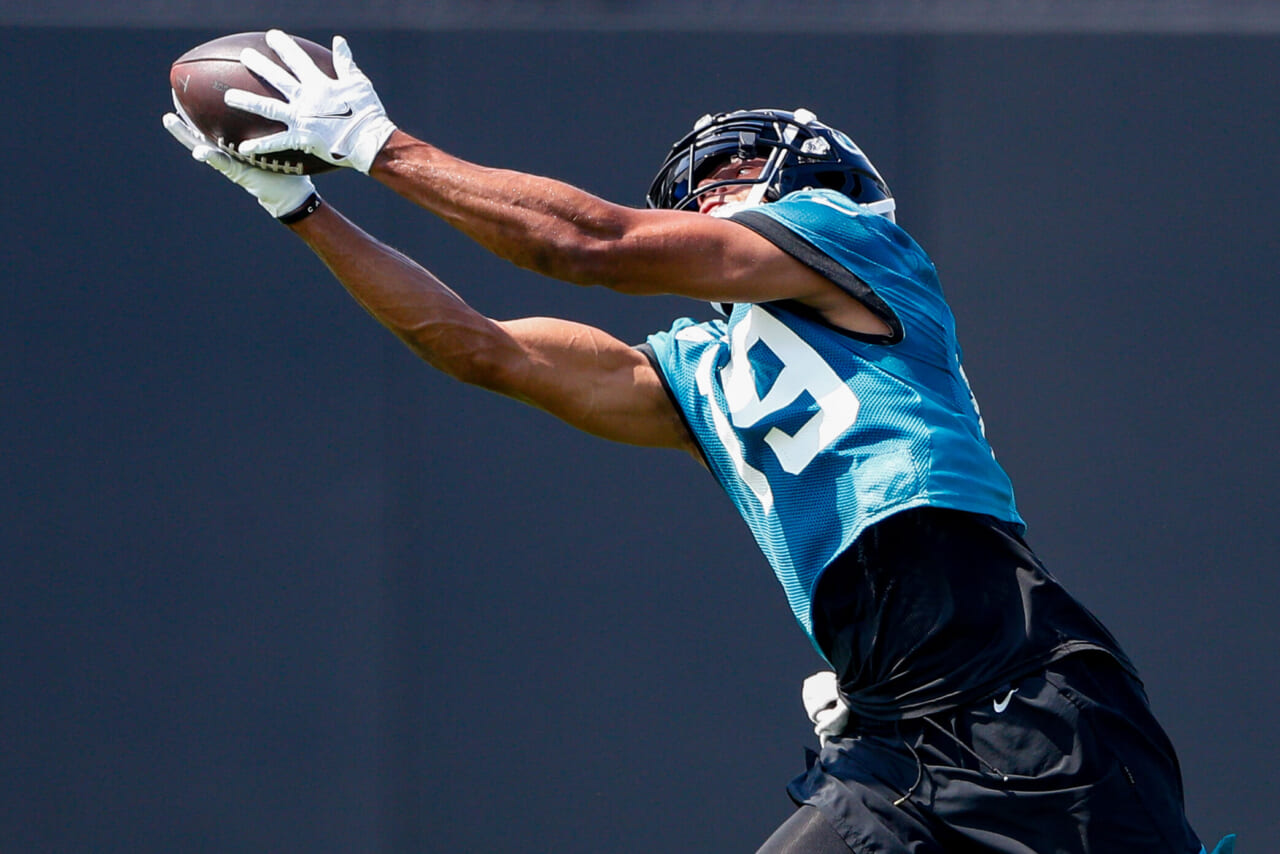 At first glance, some might question whether or not former Texas standout Collin Johnson is capable of being a productive receiver at the NFL level. Having been released by the Jacksonville Jaguars this off-season, the New York Giants quickly scooped him up off the waiver wire.

Johnson spent his rookie season with Jacksonville last year, as a fifth-round pick. He tallied 272 yards and two touchdowns, but he offers something very specific for a Giants team that invested heavily at the wide receiver position is off-season, especially when it comes to Kenny Golladay. Big Blue signed Golladay to a four-year, $74 million deal, but having a competent back up option behind him is essential so coordinator Jason Garrett doesnâ€™t have to upend his scheme.

In 2020, the Giants lost star running back Saquon Barkley in Week 2, and the offense saw half its playbook go with him. Adding Golladay, Kadarius Toney, and the return of Barkley should open things up tremendously for a unit that desperately needs to see improvement.

Johnson offers a supplement to Kenny, as the tallest receiver in the NFL at 6’6″, 220-pounds. Johnson isn’t known for his route running, but rather his ability to high-point footballs and make contested catches.

The Draft Network coined Johnson a “big physical WR” coming out of Texas:

Big physical WR that displays good overall athleticism for the position. He uses excellent length and excellent catch radius in contested catch situations. He shows sufficient play speed on 8 and 9 routes while also displaying good tracking ability to locate the football in the air. He will use his big body to catch a 6 route and absorb contact. Displays good willingness and courage to give up his body to secure off targeted throws. Very good competitiveness to make difficult catches at critical moments in the game. He will be a red-zone nightmare for defenders due to his big body and ability to go get the football anywhere on the field.

With a very comparable skill set to Golladay, the Giants clearly view him as a solution if need be. Does this mean heâ€™s anywhere close to as talented as Golladay? Of course not, but itâ€™s about consistency with the scheme and not having to tear out pages of the playbook because they donâ€™t have a player who can replicate that portion.

Ultimately, this was a high upside signing for the Giants, with Johnson fitting a specific purpose.

The New York Liberty controlled Thursday’s game for three quarters, but they still couldn’t steal one from the defending champions.

Facing an increasingly dire situation in the WNBA’s playoff standings, the New York Liberty needed to steal one from the defending champion Seattle Storm on Thursday night at Angel of the Winds Arena.

For three quarters, they seemed well on their way. But Breanna Stewart unleashed her personal brand of Seattle storm on the reeling New Yorkers.

The MVP candidate tallied a game-best 33 points, helping the Storm fully reverse a 10-point deficit against the Liberty en route to an 85-75 triumph at home. New York (11-18) has now lost six in a row as they’ve fallen out of the WNBA’s current playoff bracket. The idle Washington Mystics now hold the eighth and final seed as the WNBA season enters its final stages.

ESM has three stars from this latest defeat…

A vital piece from the Storm’s victorious endeavor in the Bradenton bubble, Howard made her return to her former Seattle stomping grounds and was bestowed a championship ring alongside Sami Whitcomb (who played 12 minutes in her second game back from injury). She shot a season-best 64 percent from the field (7-of-11). Making Thursday’s loss even tougher to bear was the fact the Liberty were unable to secure Howard a special birthday gift: the three-time champion’s return to the Pacific Northwest coincided with her 30th celebration.

Allen’s streak of earning at least eight rebounds stopped at three games, but she fell just two points short of her season-best in scoring. The Australian Opal has become one of the most productive New Yorkers since returning from Tokyo, averaging 12.7 points and 5.3 rebounds over the past seven games. Thursday marked the fifth time in that span that she has reached double figures in scoring. Head coach Walt Hopkins referred to Allen’s contributions as “tremendous” in the aftermath.

“Her energy has been so consistent,” Hopkins said. “Bec somebody who has a tendency to be hard on herself. She has not let herself get out of the game in a long time. She’s not let herself get frustrated and take herself out. She’s been really resilient and really proud of the way that she’s grown in terms of her emotional and mental approach to what she’s doing.”

In the midst of some tough New York efforts, Ionescu is starting to put up Ionescu-esque numbers against. A return to the PNW area did the ex-Oregon Duck some good. With former collegiate head coach Kelly Graves in attendance, Ionescu helped the Liberty build a consistent lead in the first half. She was mostly held in check in the second half, but she still managed to facilitate and set up metropolitan opportunities. Ionescu has reached double-figures in scoring in all eight post-Olympic games and has averaged just over six assists in that span.