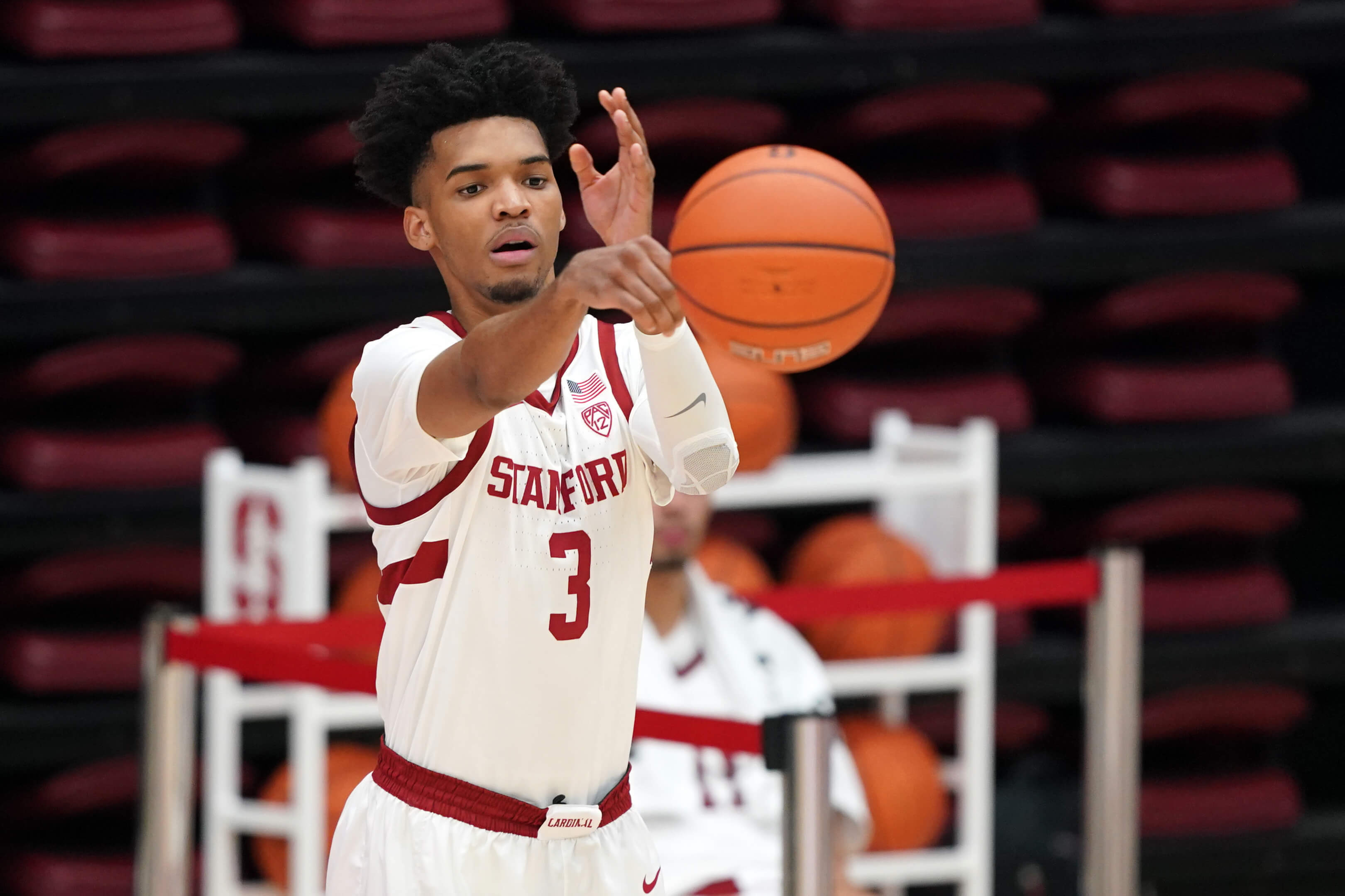 Ziaire Williams had a rough one-and-done season at Stanford, but he was impressive during his workouts. Will the New York Knicks reach for his high upside?

Ziaire Williams had a roller-coaster ride to the NBA doorstep.

Two years ago, he was on top of the world playing with Bronny James and Zaire Wade and high-fiving LeBron James and Dwyane Wade.

“Oohhhh Man! I feel like that prepared me so much,” Williams said on Tuesday during his NBA Draft media availability. “The travel alone – we traveled like 30,000 miles that season. It was a really fun experience.”

“I had to meet great teammates who I call brothers now. I got super close to Dwyane Wade and LeBron. They were just super helpful to me in learning about basketball stuff. It was really just a blessing to be a part of that.”

He was clutch, and he was a leader. He was the best player in a stacked, celebrated Sierra Canyon team.

Then came the rough part of the ride. He was in and out of the Stanford lineup during his lone college year due to medical and personal reasons. He showed glimpses of his potential averaging 10.7 points, 4.6 rebounds, 2.2 assists, 0.6 blocks, 0.9 steals, with a 37/29/79 shooting split which leaves a lot to be desired.

The talent and potential are there. Like when he posted the second triple-double in program history with 12 points, 12 rebounds, and 10 assists against Washington last January. But the inconsistency he showed in his one-and-done season has brought a lot of question marks causing him to drop in some NBA Draft Boards.

Projected to go in the mid to the latter part of the first round, Williams worked out with 10 NBA teams hoping to erase those doubts and buy into his potential as a big 3-and-D wing. That includes a two-player workout with the Knicks who are eyeing wings and shooting in this draft.

“It was a great workout and it was intense. It was just me and another player I have little contact with. I love it there. World Wide Wes – that’s my guy, man! He’s a character,” Williams said.

World Wide Wes is, of course, the Knicks executive vice president William Wesley, the animated Leon Rose’s right-hand man. He embodies the Knicks’ burning desire to move up in the NBA’s upper echelon and has a big voice in the front office.

At the opposite end of the spectrum is Tom Thibodeau, the team’s head coach, usually reserved with measured words and moves who served as the rock of a young Knicks team that went on a surprising playoff run last season.

“I met coach Thibodeau, all the guys. [They have] super great staff. You can tell it’s genuine and they’re passionate about their jobs. So, I would love to go to the Knicks for sure,” Williams said.

Then he quickly added before everything got out of context: “I would love to go to any team. I don’t have favorites. I just want to go to a team that’s the right spot for me, a team that believes in me and that’s gonna help me become the player that I could become.”

Williams spent time watching the Knicks last season, especially in the playoffs, where he saw the glaring hole he hopes he could fill if they select him on Thursday.

“I know they could use a wing who can shoot and is versatile like me. They’re very scrappy and gritty, who’s gonna defend before anything – that’s a big thing that Thibodeau preaches,” Williams said. “It all starts with hunger. So [what I can bring is] just playing hard and work ahead of the man in front of you. [Help in] executing the plays down the stretch, listening to the game plan, and executing as a team.”

Kevin O’Connor of The Ringer has the Knicks picking up Williams with the 21st pick if they don’t move up in the draft. Sam Vecenie of The Athletic slots him to go to Oklahoma City at no. 18. Jonathan Givony of ESPN projects Williams to go to Atlanta with the 20th pick but noted that he had gained traction following solid workouts “that showed there’s more to his game than scouts saw in his disrupted season at Stanford.”

Williams prides himself on being a student of the game that may bode well in his NBA career. LeBron James was his first memory of NBA basketball, and it was a dream come true for him to get close to him. He also loved Tracy McGrady and Penny Hardaway. He marveled at Kobe Bryant’s competitive fire and looked up to Kevin Durant’s elevation as a future all-time great despite having a reed-thin body similar to his frame.

When asked if he has a list of players he’s excited to face in the NBA, his revealing answer provided a window to his mindset and approach to the game that makes you think the Stanford saga was just a blip to his promising basketball career.

“I want to play them all. I want to see for myself what makes them so good,” Williams said. “And then I’m going to back to the film and try to take the little details of the moves they used on me. That’s my thing.”

Growing up in a family with a strong military background, Williams learned at a young age how to stay disciplined and game plan to accomplish whatever mission he has set for himself.

“I know my first year, I’m really just going and gonna learn as much as possible whether that’s from my team or players from other teams. I really just gonna set the standard to follow a routine that I really want to set for myself for the first couple of years so that the rest should be easier and to have a long career,” Williams said.

Some prospects are fixated on how to impress teams during workouts and meetings. But while that’s also a priority for Williams, he made sure the learnings during the whole predraft process won’t get swept under the rug.

“A lot of things have popped up like when I was in Oklahoma City, the coach over there, we were talking about all the analytics and how I love to go to midrange. He was just telling me how the game has transformed. He’s telling me it’s better to be open-minded,” said Williams who took that advice to heart.

“He brought up the analogy of the Kodak camera. They didn’t do anything to improve so they’re now out of business and all the Twitter, Instagram stuff has taken over. So he was telling me the same way that if you’re not open-minded to changing and try different ways to get to the rim, that will kind of make your game obsolete based on the analytics so to speak.

“I can be just like Kodak, out of business one day. That was really helpful,” he added. “So, I just go in and learn and find ways how to get into the paint or maybe instead of the contested two-pointer, maybe stepback and create for 3. That’s just an example of something that I have learned throughout this pre-draft process.”

Williams has the right mindset. Now, it’s time for him to get his body right. At 188.4 lbs, he’s too skinny for his size. That’s one of the knocks on his game at Stanford, where he shied away from contact and couldn’t handle physicality well. Much of his upside is tied with his projection to become a long, athletic defender who can guard multiple positions.

But he’s just 19. His body will mature, and the hope is his game will follow.

Based on how Williams sounded in interviews, he says all the right things.

“Personality-wise, I’m energetic, super respectful, and a caring person. I’m all for the team. I play the game, not for myself but to win. I hate to lose,” Williams said.

His answer to the one question that always pops up during his interview with the teams makes him a safe bet in the mid-teens of the first round.

“They asked me what goals do I have, and I answered I want to be an NBA champion, first and foremost. Because I love winning. I’m more about sacrificing for the team than anything,” Williams said.

Spoken like a star role player in a contending team.

His roller-coaster ride brought him highs and lows, but the learnings along the way weren’t lost on him. It’s a solid foundation to have as he begins his NBA journey.