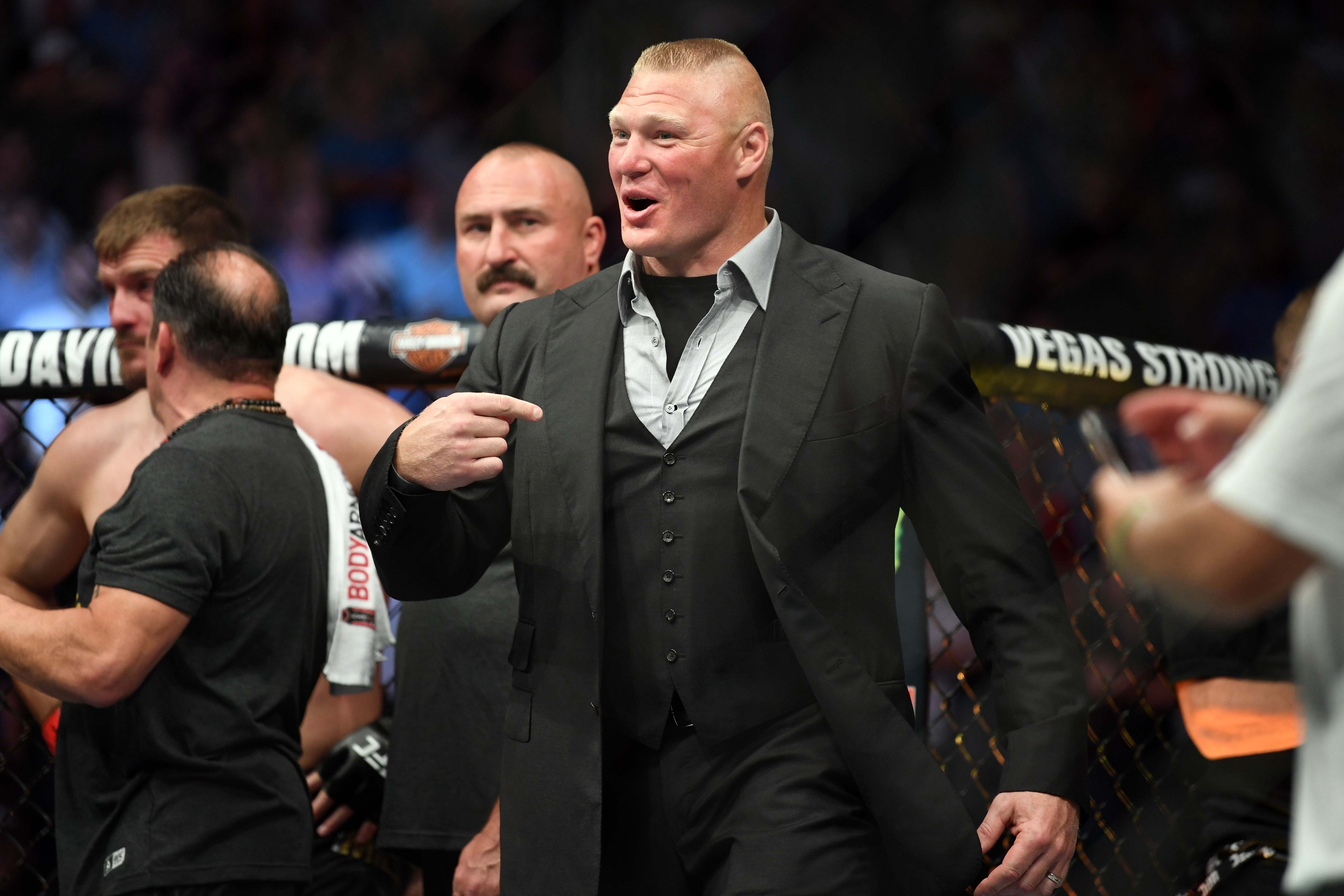 The combat sports world has been buzzing over the past few days after learning that former UFC heavyweight champion, Brock Lesnar (5-3, 1 NC), was a free agent. Lesnar’s merchandise was pulled off the WWE website, and it’s been reported that they couldn’t come to terms on a new deal.

Of course, many quickly pointed out a potential MMA return for Lesnar. Scott Coker of Bellator pointed out potentially matching him with Fedor Emelianenko. However, I believe he still has an active UFC contract. At least, Dana White said that a couple of years ago.

Lesnar was going to return to the UFC to fight Daniel Cormier after Cormier won the heavyweight title from Stipe Miocic at UFC 226. Lesnar even entered the USADA testing pool. That fight never came together, and Lesnar stayed with the WWE. Now, White seems to be interested in Lesnar fighting another top UFC star.

Dana says Brock would be a "good introduction" to the heavyweight division for Bones 👀 pic.twitter.com/tmrtP9feEQ

Lesnar – Jones in the UFC?

If Brock Lesnar is actually interested in fighting again, Jon Jones (26-1, 1 NC) is the only fight that makes real sense. I don’t see Lesnar at 43 years old coming back for a title run. He might just want to come back for one big show that’ll generate a massive payday for him.

Jon Jones is stuck right now. He’s moving up to heavyweight, but he’s not the first in line for the title. The UFC has stated over and over that Francis Ngannou (15-3) will be getting the next crack at Stipe Miocic. So until that fight, Jones will wait on the sidelines.

Nobody wants to see Jones fight a contender like Curtis Blaydes or Derrick Lewis. They want to see him fight for the title or fight someone extremely entertaining. That’s where Brock Lesnar enters the UFC‘s train of thought.

Jones has expressed interest in fighting Lesnar in the past. Lesnar always told Jones to be careful what he wished for. A Jones – Lesnar fight is really a win-win situation for the UFC. It’s not really a massive risk for Jones in fighting a 43 year old Lesnar, and it would be a big payday. As White pointed out, it would be a good introduction to heavyweight for Jones.

I’m not convinced that this fight will actually happen, but it is one that would make sense in a weird way. While it’s not the fight it once would have been, I’m all in for seeing Jon Jones fight Brock Lesnar in the UFC.

Yesterday news starting to leak out that former UFC heavyweight champion, Brock Lesnar (5-3, 1 NC), was a free agent. PW Insider was the first to report that Lesnar’s contract with the WWE had expired.

Since the news broke, many have discovered that the WWE has pulled all Lesnar merchandise from their website. Of course the news has prompted many in the sports world to ponder what is next for Brock Lesnar.

Could the former UFC heavyweight champion make his return to MMA at 43 years old? Lesnar had previously entered the USADA Testing Pool in his effort to come back and challenge Daniel Cormier for the heavyweight title after their exchange at UFC 226.

UFC or Bellator for Lesnar?

We all know now that Lesnar did end up deciding to not return for the fight with Cormier. Instead, Lesnar decided to stick it out with the WWE instead of making his return to the UFC.

Bellator President Scott Coker came out yesterday and said that they would be interested in signing Lesnar if he’s available. Coker told ESPN’s Ariel Helwani, “Yes, if he’s truly available. Fedor vs. Brock is interesting. It’s the fight that never happened!”

We have not seen Brock Lesnar inside a UFC cage competing since UFC 200. That night, Lesnar won a decision over Mark Hunt. Of course, Lesnar went on to test positive, and the fight was overturned to a no contest.

Jon Jones (26-1, 1 NC) took to Twitter yesterday to give his thoughts on fighting Brock Lesnar. Jones had called Lesnar out after he defeated Daniel Cormier in hopes of making a super fight with the former heavyweight champion.

Lesnar is one of the three greatest draws the sport of mixed martial arts has ever seen. Him alongside Conor McGregor and Georges St. Pierre were all superstars. Lesnar was truly the first mega star given his background and popularity in the WWE.

It will be interesting to see if Lesnar decided to come back to the UFC or Bellator, retire from everything, or perhaps sign a new pro wrestling deal with AEW. Time will tell, but it’s definitely a situation to monitor.