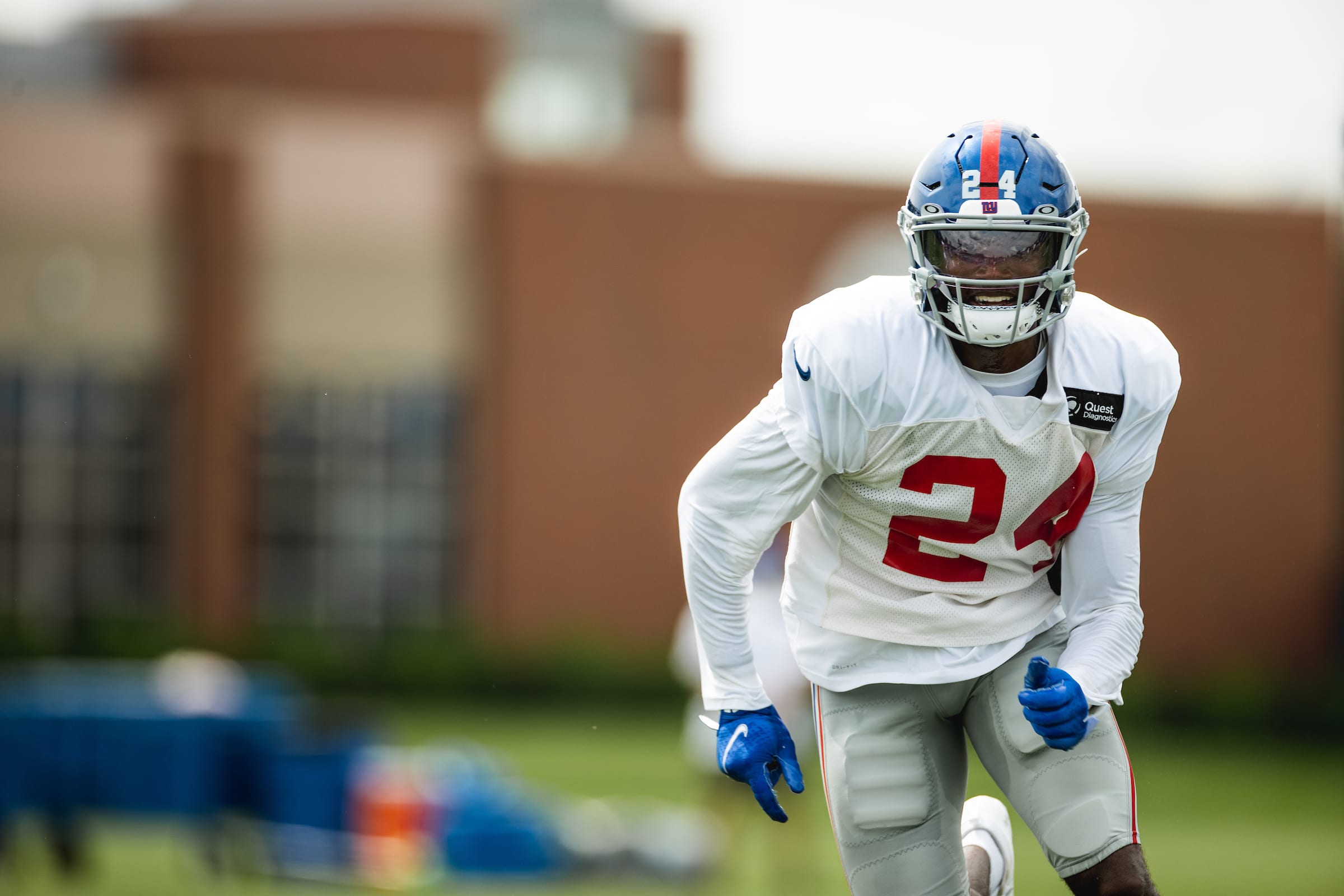 The New York Giants endured another heartbreaking loss today. The Giants fell short in their comeback attempt against the Chicago Bears, falling to 0-2 for the fourth year in a row.

Daniel Jones and the Giants’ offense surged back late in the game and had a chance to win on the final drive of the game. Unfortunately, it was too little too late. But this game could have been much worse. After a putrid first quarter, it seemed likely that the Giants would be blown out on Sunday.

One factor that held the Giants together on Sunday was their formidable defense. The Chicago Bears were held to only 17 points as the Giants forced 2 turnovers. One player, in particular, stood out on Sunday afternoon: James Bradberry.

The New York Giants signed cornerback James Bradberry to a highly-lucrative contract this offseason. Bradberry inked a three-year deal worth $43.5 million. So far, Bradberry has lived up to the contract, performing as the best player on the Giants’ defense.

In Week Two, Bradberry totaled 4 tackles, 4 passes defended, and 1 interception. He was constantly getting his hands on the football, making plays, and breaking up passes. His interception on Allen Robinson was maybe the most impressive play of the game:

The Giants are alive in this game right now, some way, some how #TogetherBlue pic.twitter.com/dtOjQwoHsg

This was one of many impressive plays Bradberry made on the football today. But this is nothing new, rather, this is a continuation of last week. Bradberry was solid in Week One, too, forcing a fumble and deflecting 2 passes.

With 6 passes defended through two games, James Bradberry is pacing out to have one of his career’s best seasons. Continued success from Bradberry in coverage will be key for the Giants as this season continues, especially considering the poor performances from the rest of the team’s cornerbacks through two weeks. 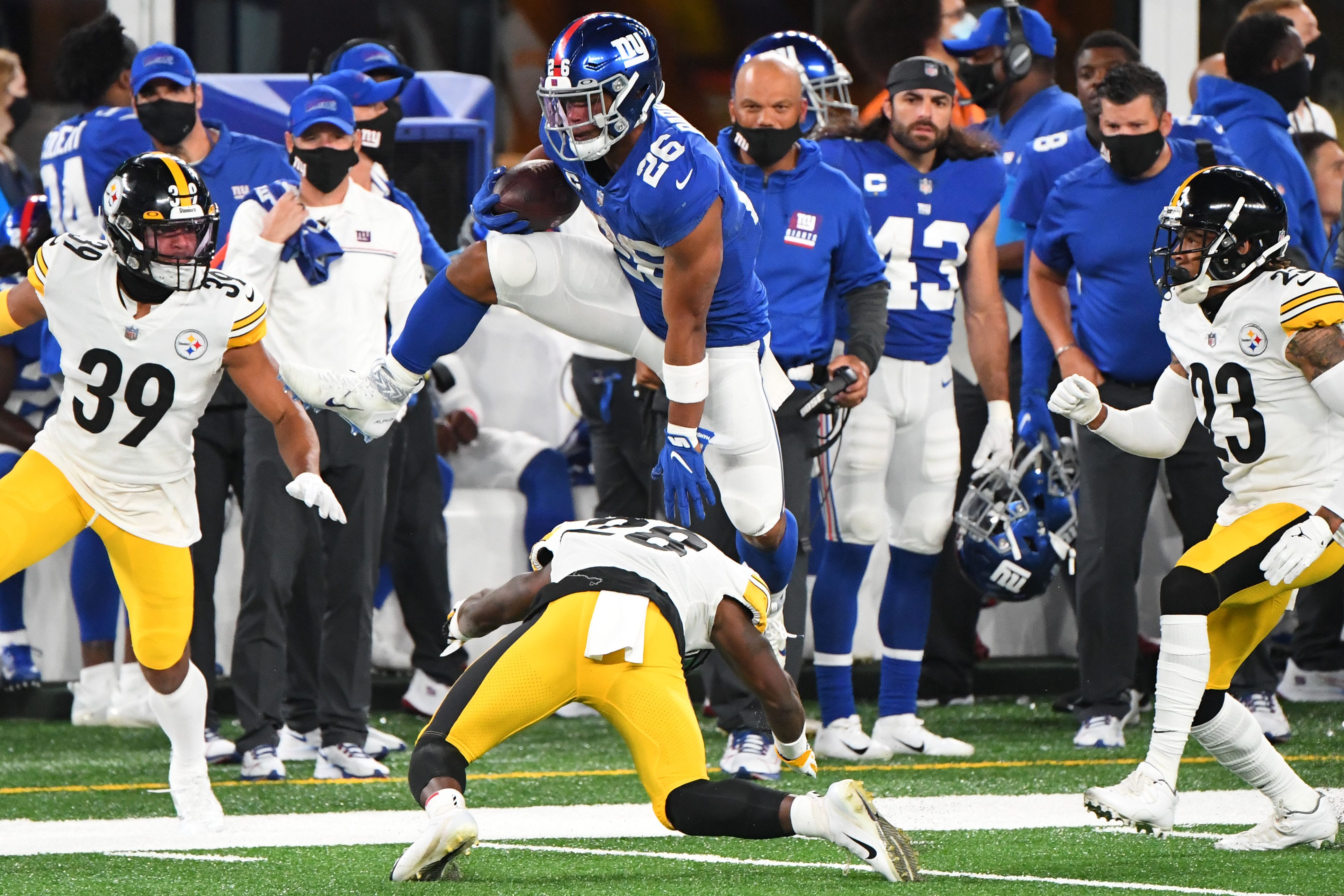 The New York Giants are coming off of a disappointing loss to kick off the season. On Monday Night, New York lost to the hands of the Pittsburgh Steelers with a final score of 26-16. Despite this loss, there were plenty of positives to draw from the Giants’ performance. However, there were some glaring negatives to take away from it as well.

In particular, the Giants had a couple of disappointing performances on the offensive side of the ball. Saquon Barkley and Evan Engram, two of the Giants’ most dynamic playmakers, need to improve in Week Two if the Giants want to beat the Chicago Bears.

Saquon Barkley Not An Every-Down Back?

Superstar running back Saquon Barkley has received plenty of criticism from the media and fans after his performance in Week One. Most prominently, former Giants star running back Tiki Barber was very critical of Barkley this week. Tiki was quoted saying:

“Saquon Barkley is a great back, but he might not be an every down back. He cannot pass protect. It’s becoming glaring & could become a liability” – Tiki Barber on Saquon Barkley

What Tiki said does have some substance. Obviously, Saquon is a phenomenal running back and should be on the field as much as possible. He is a mismatch as a receiver and a big-play machine as a runner. And it is hard to criticize Barkley’s Week One rushing performance, given the way his offensive line played on Monday night. But Saquon Barkley’s struggles in pass protection have become a glaring weakness in his game.

Saquon let up more than one sack in pass protection on Monday night. According to Pro Football Focus, Saquon Barkley earned a 27.0 pass-blocking grade in Week One. He was a liability in pass protection for the Giants vs the Steelers. Granted, the Giants were facing arguably the best defense and best pass-rush in the NFL in Week One. It is a long season, so Saquon has plenty of time to improve, but he needs to step up and silence the doubters against the Bears in Week Two.

The uber-versatile tight end Evan Engram had maybe the worst game of his career in Week One. With Jason Garrett serving as the team’s new offensive coordinator, Giants fans heard all season long about how big of a role Evan Engram would have with the Giants moving forward.

While Engram did have a substantial role in the Giants’ game plan versus the Steelers, he put together an extremely disappointing performance in that role. Engram was targeted 7 times on Monday but only hauled in 2 receptions for 9 receiving yards. Evan also dropped 2 passes in this game and committed an offensive pass interference penalty that erased a big gain through the air.

Pro Football Focus’s grading for Engram was pretty harsh, too. They gave Engram the worst grade amongst all tight ends in the league, 30.9 overall. Evan was also a complete liability as a blocker, both in pass protection and in the running game. He earned an 18.2 pass-blocking grade and a 32.9 run-blocking grade, both the lowest marks at the position.

Monday’s game was a night for Engram to forget. He will need to bounce back in a major way on Sunday to quiet the critics. Fans and analysts alike have torn Engram to shreds this week, rightfully so. But, like Barkley, Evan has plenty of time to make things right. A strong performance in Week Two versus the Bears will get Engram back on the right track.