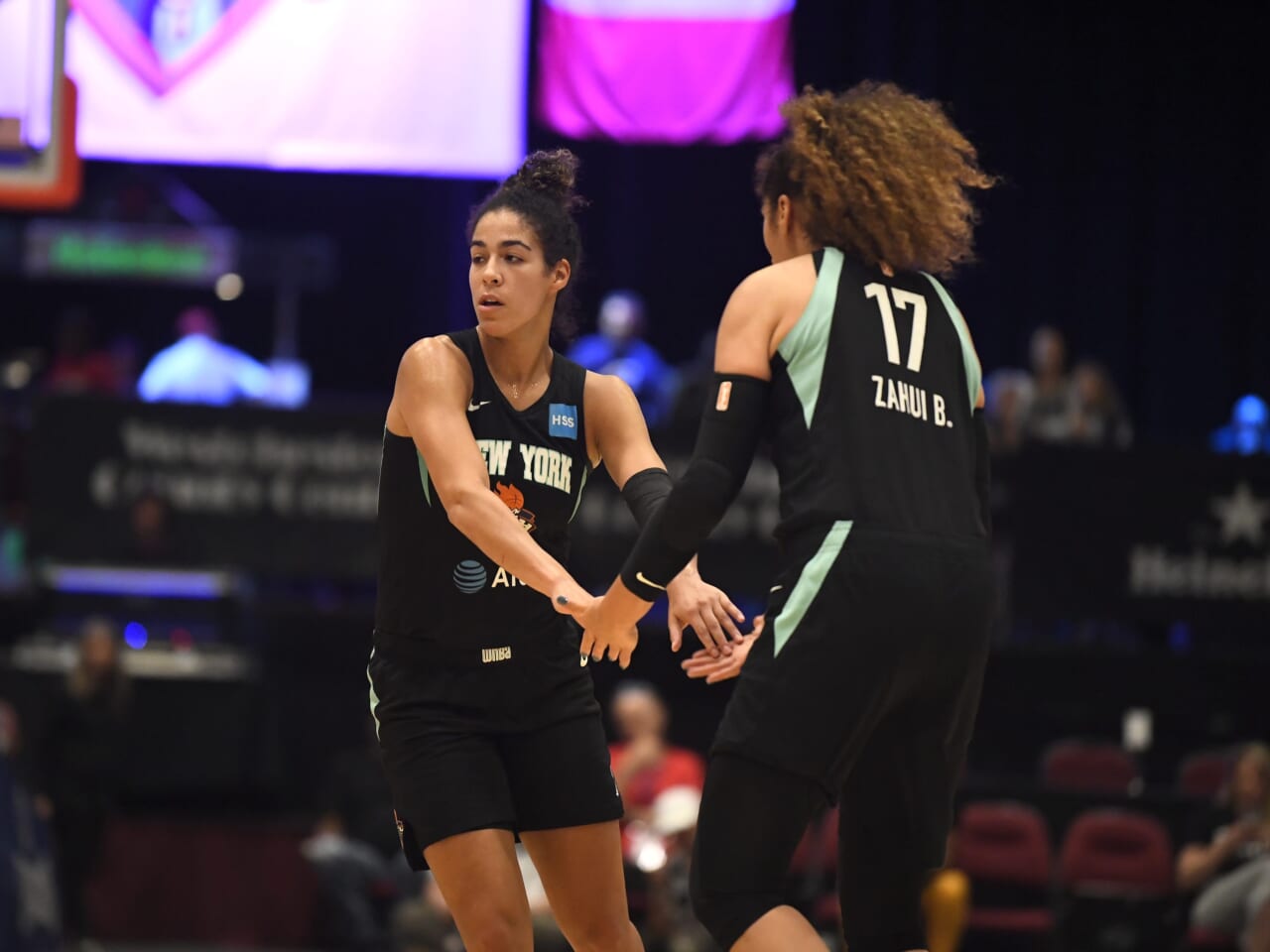 As the NBA 2K franchise expands its WNBA content, virtual ratings for 16 members of the New York Liberty have been released.

The New York Liberty’s season in the WNBA’s Bradenton bubble has come to an end, but their virtual counterparts are getting ready to take the court.

2K Sports has unveiled the player rankings for the upcoming next-gen console release of NBA 2K21, the latest installment of its long-running pro basketball simulator. The game will feature WNBA squads for the second season and player ratings for each of the league’s dozen teams have been unveiled.

Perhaps not surprisingly, the rebuilding Liberty, who endured a 2-20 record in a year that featured seven rookies, have the lowest team rating amongst the WNBA’s 12 teams. However, New York might yet prove to be a popular choice amongst players, as touted rookie Sabrina Ionescu lead the way with an 81 overall rating. The record-breaking collegiate sensation Ionescu was the top overall pick of April’s WNBA Draft and partook in three games with the Liberty before sustaining a season-ending ankle injury. She was not on the inaugural edition of last year’s roster, though that didn’t stop players and streamers from adding her in later on.

Third-year woman and 2019 WNBA All-Star Kia Nurse comes in a 2nd place with an 81 rating. She joins Ionescu as one of five Liberty players ranked in 2K’s Top 100 WNBA players, joining Layshia Clarendon, Asia Durr, and Amanda Zahui B (all coming in a 79).

Players may also be attracted to the Liberty for their propensity to shoot the three-pointer. The New Yorkers attempted over 600 triples in actuality, and they’re blessed with six players with a three-point rating of at last 80. Rebecca Allen, one of several players who opted out of the 2020 campaign, leads the way at 86, followed closely by mid-season acquisition Paris Kea at 85. Allen, Megan Walker, and Jocelyn Willoughby have all been granted the label of “3-PT specialist” as well. In other positives, New York’s athleticism rating of 82 is tied for the best in 2K’s WNBA with the Los Angeles Sparks.

The Liberty’s full season ratings can be found here.

Working a WNBA license for the second straight season, the game has drastically expanded its work with the Assocation. Next-gen console releases will feature a customized player mode, as well as a franchise mode. NBA 2K21Â will be released on November 10 for XBox Series X/S, with a release on the PlayStation 5 due two days later.

Gamers in green got a bit of a treat this week, as the New York Jets’ ten best players in Madden NFL 21 were revealed.

The status of the 2020 NFL season may be in question, but pixelated gridiron endeavors are perhaps more ensured than ever.

As the arrival of Madden NFL 21 looms next month, player ratings from the game have begun to trickle out through either leaks or official releases from developer Electronic Arts. Popular Madden strategy and fan site Madden School (which is not affiliated with EA) has obtained the top ten highest-rated players from each of the league’s 32 teams. The top portion of the Jets’ list is dominated by defense, with six defenders leading the rankings. Safety Jamal Adams headlines the proceedings with a mark of 92, up two points from last season.

The full top ten is below…

Additionally, EA officially released the top ten players in each skill position, as well as the ratings for rookies in those spots…

Notably absent among the top ten is quarterback Sam Darnold, who had a 74 labeling in last year’s original postings. Madden rankings can fluctuate and update throughout the season, so these rankings are subject to change.

Baltimore Ravens quarterback Lamar Jackson is set to grace the cover of Madden NFL 21, which will be the 34th edition of the iconic franchise. Super Bowl MVP Patrick Mahomes of the Kansas City Chiefs and Carolina Panthers running back Christian McCaffrey are the latest members of the “99 Club”, earning the highest rating a player can achieve in the game, which is named after renowned football coach and commentator John Madden. Brett Favre is the only Jets player to grace the cover of Madden. He originally appeared in a Green Bay Packers uniform for Madden NFL 09 (released in August 2008), but an alternate cover was made available after he was traded to New York shortly before the start of the season.

Madden NFL 21 well be released on August 28 on the PlayStation 4 and Xbox One consoles. 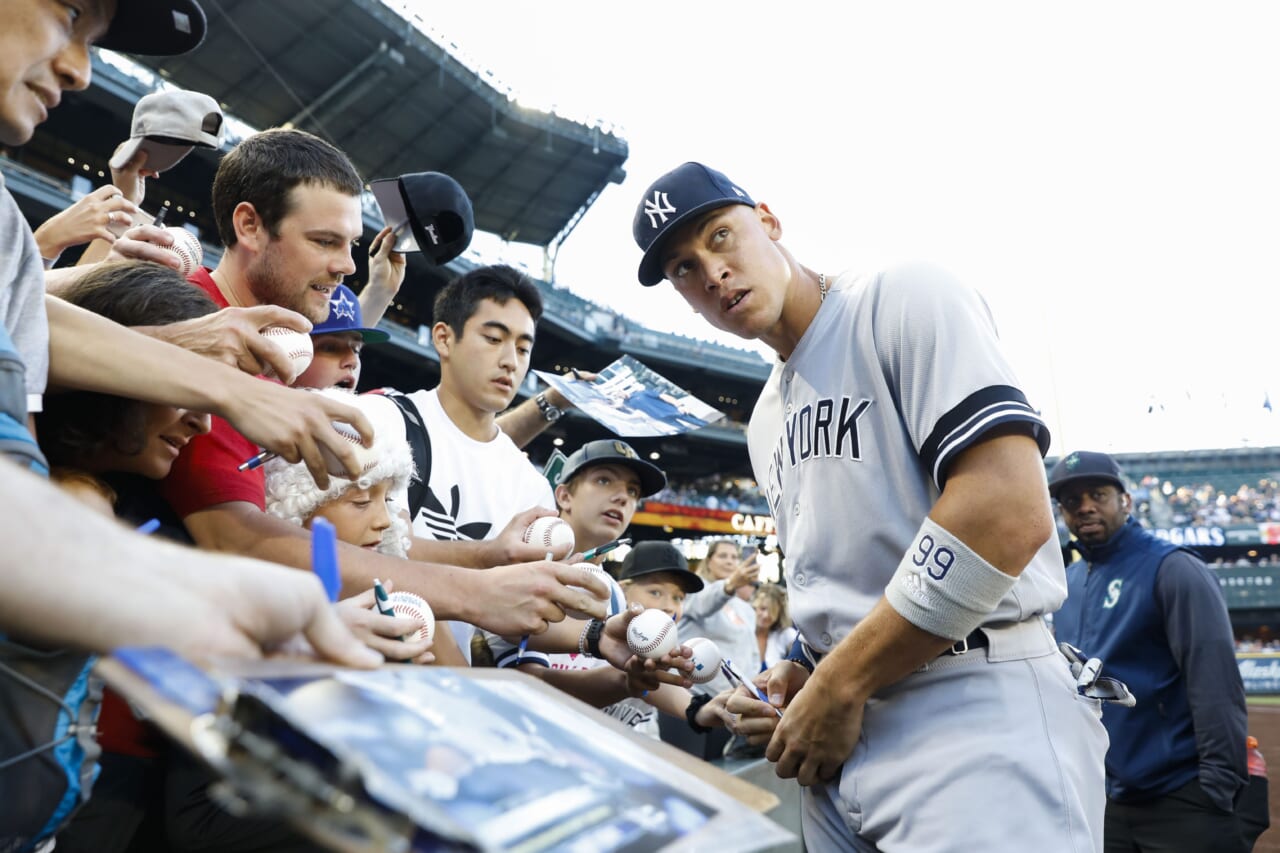 It’s peculiar to realize that it’s been 20 years since the Mets and Yankees met in the World Series. The Yankees are trending as one of the top teams to beat in the American League, and the Mets are posed to make it back to the playoffs with much more believable prospects at a Wild Card berth. And as we saw from the Mets in 2015, ANYTHING can happen when you get in.

But, now, similar to the way Madden projects who’s going to win the Super Bowl, MLB The Show thinks a new Subway Series is well within the cards.

Both teams are projected as winning 91 or more games. The game picked one champion for each division. The sole exception being the NL East, as the game predicted the Mets AND Braves will both win 91 or more games. The other teams the Houston Astros, Cleveland Indians, LA Dodgers, and Chicago Cubs. There is no Wild Card contender predicted in the American League.

Now, basing anything on the projections of a video game is… well, silly. But, thinking back to Madden, it’s not out of the realm of possibility that they are right about something. Madden predicted 10 out of 16 Super Bowl results since 2004. And as predicting division winners isn’t the same as predicting the World Series winner, 4 of the 7 teams predicted as playoff contenders for 2020, did make it to the Championship Series for each respective league last season.