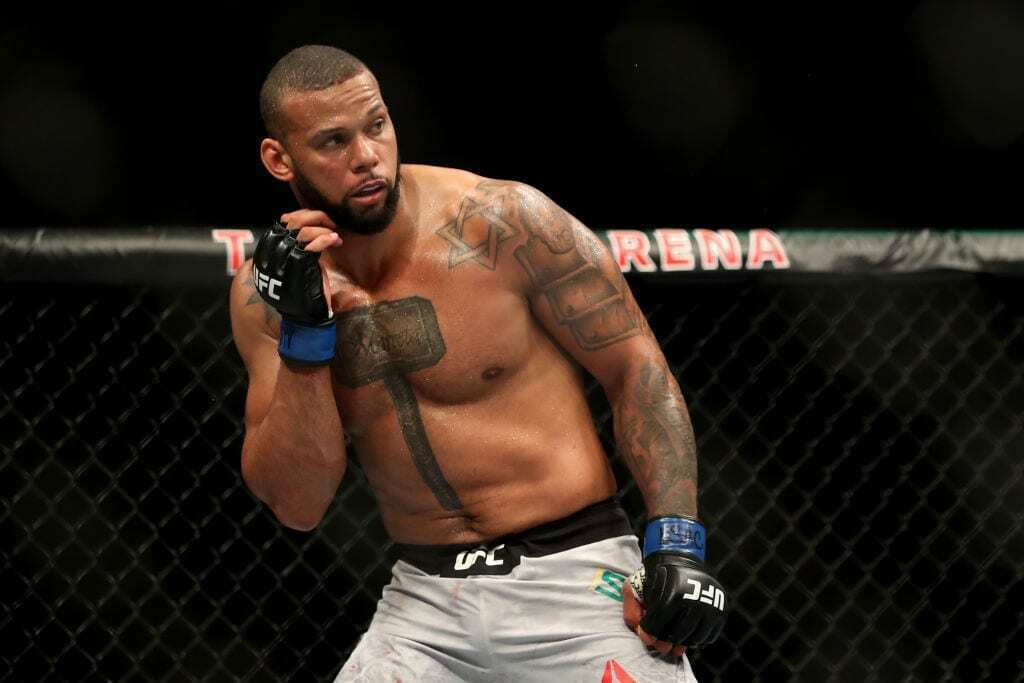 This past Saturday in the main event of UFC Vegas 38, Thiago Santos (22-9) returned to take on Johnny Walker (18-6). Santos entered the bout trying to snap a three-fight losing streak.

Now, the first fight in that losing streak for Santos came against Jon Jones for the UFC light heavyweight title. Santos lost a split decision in a fight where he completely tore his knee apart in the first round.

Since returning, he hasn’t looked like the same fighter. Santos dropped fights to Glover Teixeira and Aleksandar Rakic since returning from injury. This main event against Walker was a good opportunity to reset against a lower ranked opponent.

Now, Walker is very dangerous and he showed that on Saturday night. There were some definite spots where Walker gave Santos some trouble at UFC Vegas 38, but nothing that Santos wasn’t able to get through.

Santos landed some good shots and clean counters throughout the main event. In the end, he walked away with a unanimous decision victory and now he’s finally back on track.

What’s next after UFC Vegas 38?

When Santos heard his name called, it was the first time in two and a half years that he won a fight in the UFC. The last win he had came against the current champion Jan Blachowicz.

With a win under his belt, now it’s time for Santos to try and build back towards a title shot. So, what should the UFC do with him next? I don’t think his performance was impressive enough to get him close to title contention.

He likely will need another win or even two before he gets to that point. In terms of a next fight, I would look at UFC 267 at the end of the month. Magomed Ankalaev (15-1) is taking on Volkan Oezdemir (17-5).

Whoever wins that fight would be a great next step for Santos. A win over one of those two then perhaps you could put him in a title eliminator. However, he’s going to need to impress more in his next outing. 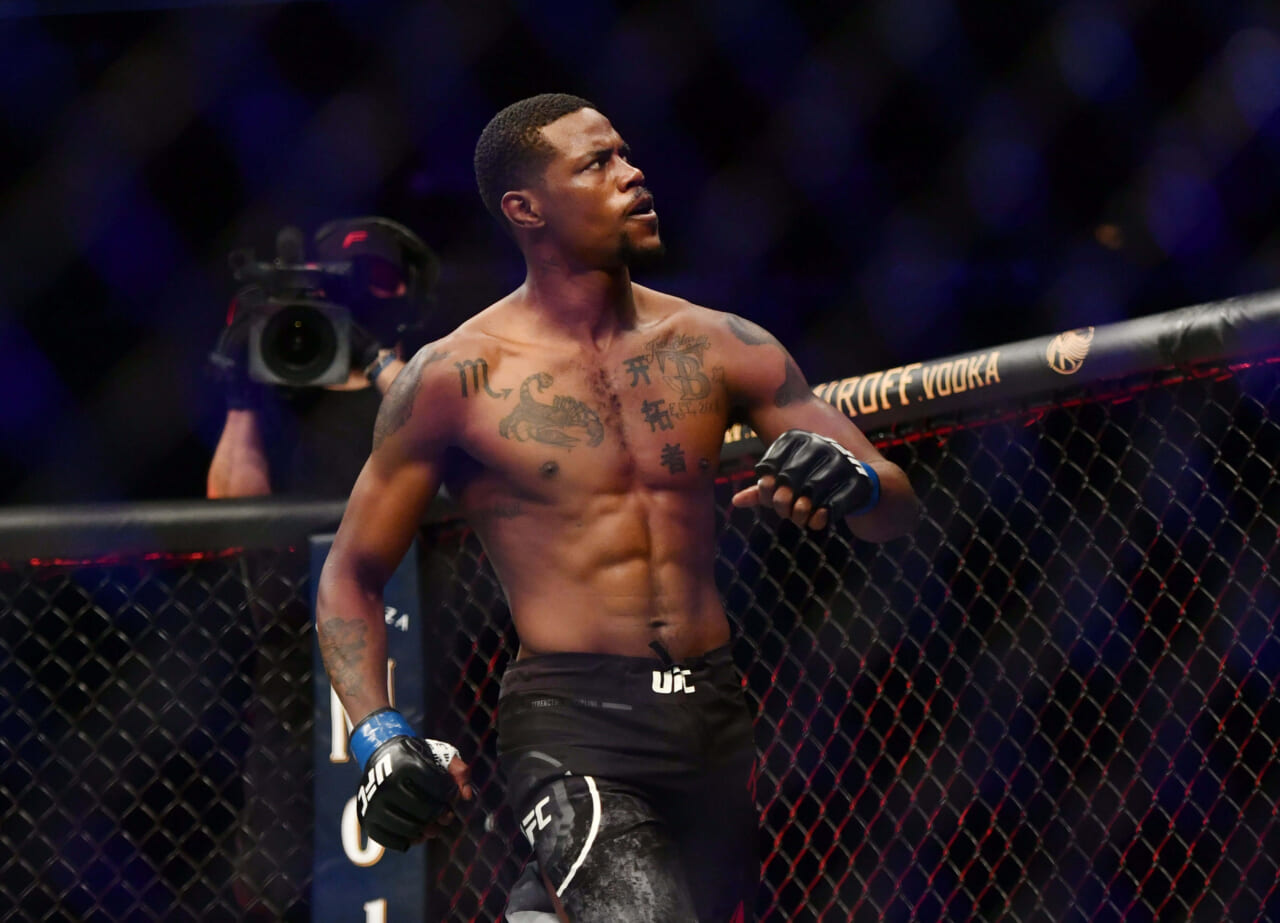 Last Saturday in the co-main event of UFC Vegas 38, we saw a middleweight showdown between Kevin Holland (21-7, 1 NC) and Kyle Daukaus (10-2, 1 NC). Holland was looking to snap his two-fight losing streak.

In 2020, you couldn’t get much better than Kevin Holland in the UFC. His personality was infectious and he was a perfect 5-0. That blistering year earned him a main event spot earlier this year against Derek Brunson.

Had Holland won that fight, the UFC would’ve put him in title contention. However, he ultimately fell short against Brunson. Then, he took a short-notice main event against Marvin Vettori and again fell short.

In both of those fights, Holland was exposed for not having the best wrestling. Prior to UFC Vegas 38, Holland switched things up and started training with former welterweight champion and national champion wrestler, Johny Hendricks.

Holland was excited to show off his new defensive wrestling and he did that early on at UFC Vegas 38. However, the fight wouldn’t last much longer and it ended in a very odd fashion.

UFC will run it back

Both men advanced for strikes in the first round and the two clashed heads. Holland had Daukaus’ head land right on his chin and it essentially put him out. He was really never able to recover.

Eventually, Daukaus got his back and was able to submit him for the win at UFC Vegas 38. However, the referees got together after the fight and started talking about what led to the submission.

Ultimately, it was ruled that the headbutt led to the finish and the fight was ruled a No Contest. Everyone, including Daukaus, seemed content with the decision. Holland was actually the one saying he thought he should’ve lost because if it was in the streets, he would’ve lost.

The UFC has decided to run things back as a result of Saturday. ESPN’s Brett Okamoto reported this afternoon that the two will run it back on November 13th. 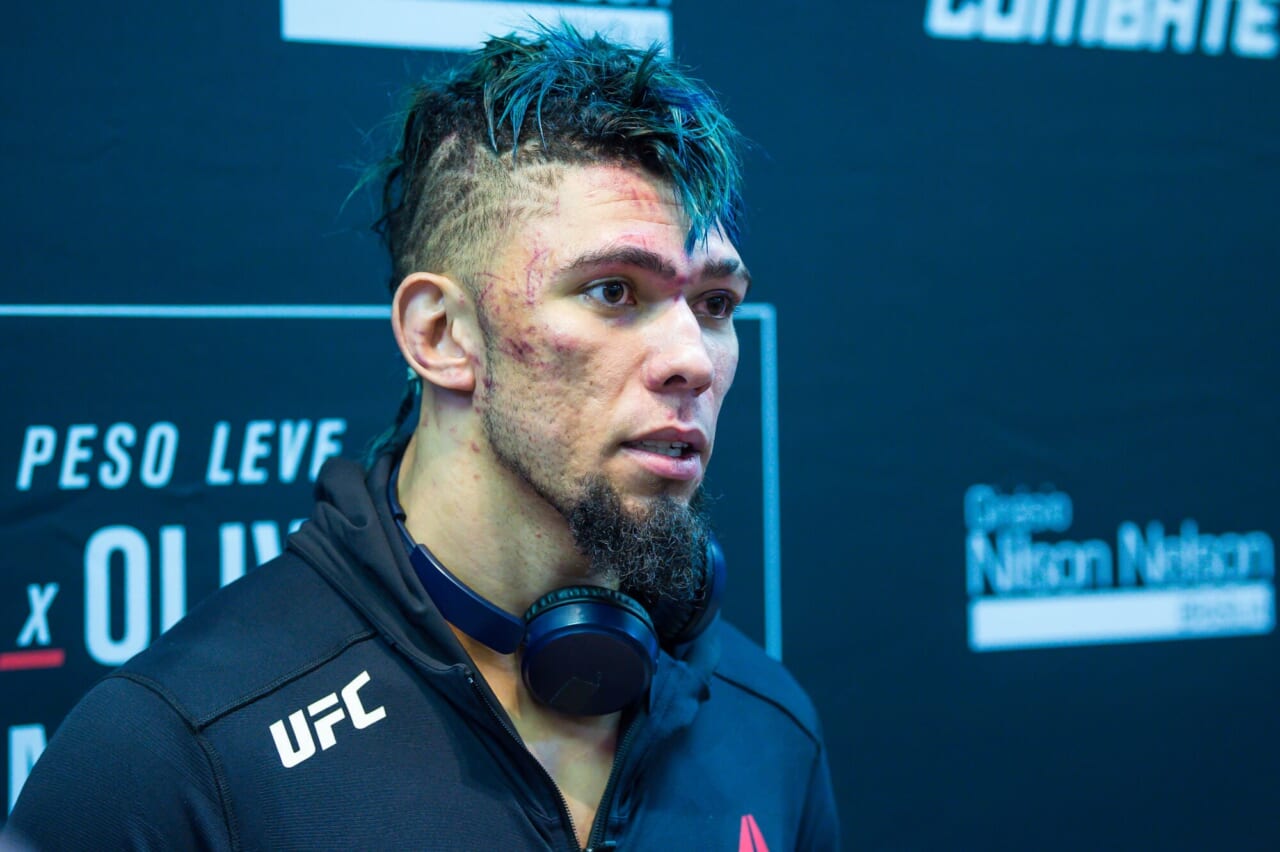 This past Saturday in the main event of UFC Vegas 38, we saw a showdown of top light heavyweights. Former title challenger Thiago Santos (22-9) returned as he took on Johnny Walker (18-6).

Walker was competing in his first UFC main event on Saturday. Santos was looking to snap his two-fight losing streak and get back on track. He hadn’t looked like the same fighter since he returned from his serious knee injury a year ago.

I really didn’t know what to expect from either man heading into UFC Vegas 38. Walker was always a wild man and Santos has been very tentative as of late. With the difference in activity level, I was leaning towards Walker.

To my surprise, Santos looked really good on Saturday. He did a good job with beating Walker to the punch and he landed some really clean shots throughout the fight. Walker also held his own and did a good job of landing on Santos.

The fact lacked the action I was expecting at UFC Vegas 38. I think that most expected a wild fight that would end in a finish, but that’s not what we got. In the end, Santos walked away with a decision after taking three of the five rounds.

What’s next for Johnny Walker after UFC Vegas 38?

Even in a loss, I think we can take a lot away from Walker’s performance at UFC Vegas 38. To me, this was the first time that he fought with poise and had a mature look to his fighting style. That said, he didn’t land enough or have big enough spots to get the win.

However, I don’t think he’s going to be hurt too much by this loss. With that, what should the UFC do with him next? There are several options out there, but one of the options I like is a fight with Paul Craig (15-4-1).

Craig ranks just behind Walker in the rankings currently and he’s riding a current streak that has him 4-0-1 in his last five. To me, this is a really good matchup to see who’s ready for a more serious contender inside the UFC’s top ten. A good measuring fight for both men in my opinion.

Tomorrow night in the main event of UFC Vegas 38, we will see a battle between two of the more exciting light heavyweights in the division. Former title challenger Thiago Santos (21-9) takes on the exciting Johnny Walker (18-5) in the main event.

Johnny Walker earned a UFC contract on The Contender Series then proceeded to open everyone’s eyes after he debuted. Walker started out his UFC career going a perfect 3-0 with three knockouts.

None of those fights went more than two minutes. He rode that momentum into a fight with Corey Anderson. However, after his third win, he dislocated his shoulder in a victory celebration which seemed to derail his success. Walker is just 1-2 since that injury.

Another fighter who hasn’t been the same since injury is Thiago Santos. Santos just challenged Jon Jones for the UFC light heavyweight title back in 2019. He knocked out the current champion Jan Blachowicz to earn that shot against Jones.

However, Santos tore his knee completely apart in that fight. He returned last year and he’s gone 0-2 since returning from injury. He’s going to have to prove to everyone that he’s still the same guy he was before the knee injury at UFC Vegas 38.

I’m really struggling with this prediction ahead of tomorrow night. To be completely honest, I’m not sure what to expect from either guy. At one point, these two looked like two of the more dangerous light heavyweights in the division.

However, neither has looked great since returning from injury. Santos doesn’t even remotely look like the same guy. His movement in his last two UFC bouts has looked really shaky and he just doesn’t seem as confident.

Walker on the other hand has a chin that terrifies me. That said, I do like the way he’s able to move and I really like his reach advantage in this one. I’ve gone back and forth and I don’t know how, but I think Johnny Walker is going to pick up the victory tomorrow night. Something tells me he’s going to be able to land more than a flat-footed Santos.

Daukaus will be making his fourth appearance in the UFC. So far, it hasn’t been smooth sailing for Daukaus. He made his debut last June and he had the tough task of taking on Brendan Allen on short notice.

Allen was the massive favorite, but Daukaus put on an incredible fight and really made Allen work for the victory. Ultimately, Allen did get his hand raised. Daukaus picked up a win in his next fight before dropping his last fight to Phil Hawes.

Standing across from Daukaus tomorrow night will be one of the UFC‘s budding stars, Kevin Holland. Well, Holland was on his way to stardom before 2021. Holland went an incredible 5-0 in 2020 which earned him a main event slot in his first fight of the year.

He took on Derek Brunson and was grounded by the wrestling of Brunson. Then, Holland took on Marvin Vettori and saw the same result. Holland has now lost two in row and has his back up against a wall at UFC Vegas 38.

Prior to this fight, Kevin Holland has spent a lot of time with former UFC welterweight champion Johny Hendricks. In fact, Hendricks is going to be in Holland’s corner tomorrow night.

Holland decided to switch things up after he discovered how much help he needed in defensive wrestling. He’s going to need to really improve if he wants to snap his losing streak tomorrow night.

Holland is dangerous on the feet and Daukaus is very dangerous on the ground. This fight is going to come down to whether or not Daukaus can get Holland down. I think he will at some point, but I believe Holland will do enough defending.

Holland will be able to defend enough takedowns to keep the fight standing long enough to have some big moments. I’m not convinced a finish will happen at UFC Vegas 38, but I think Kevin Holland gets the win.