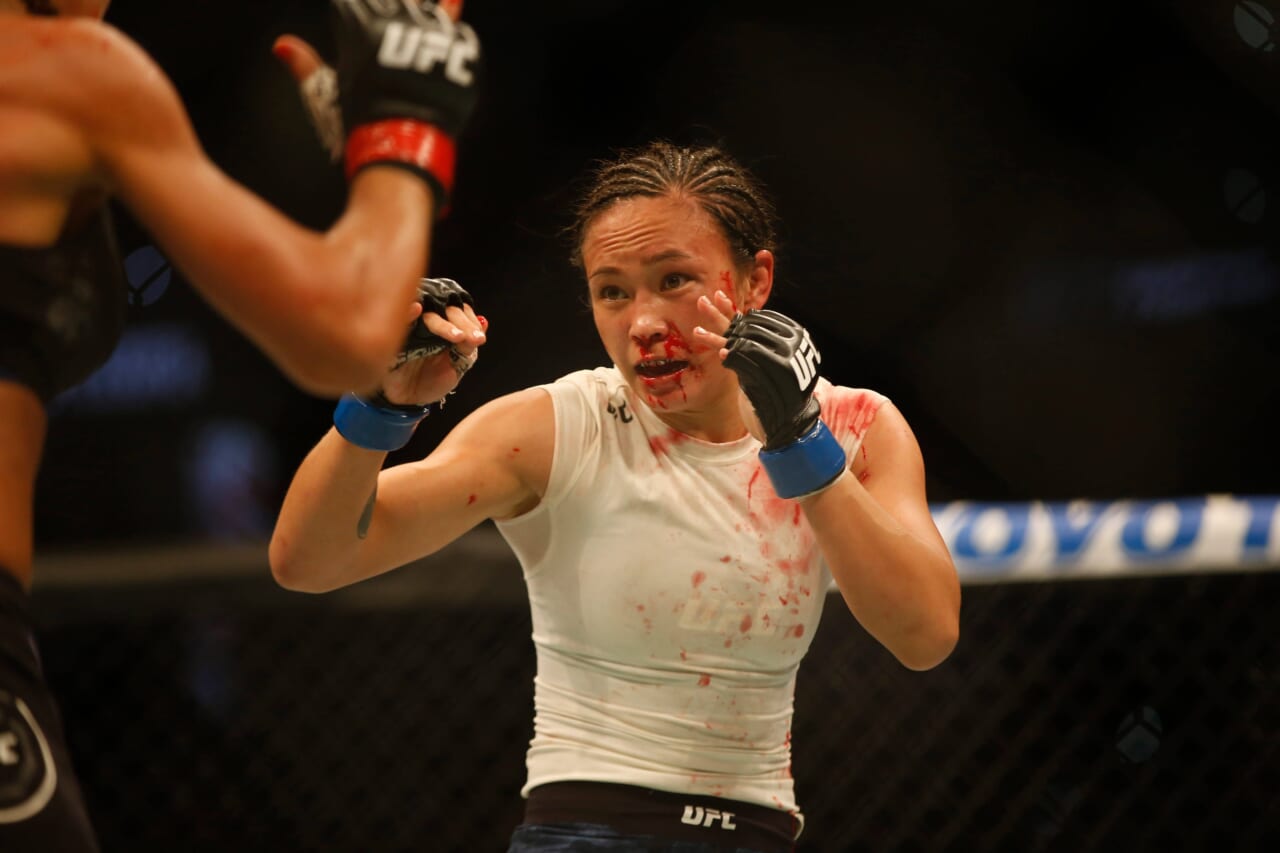 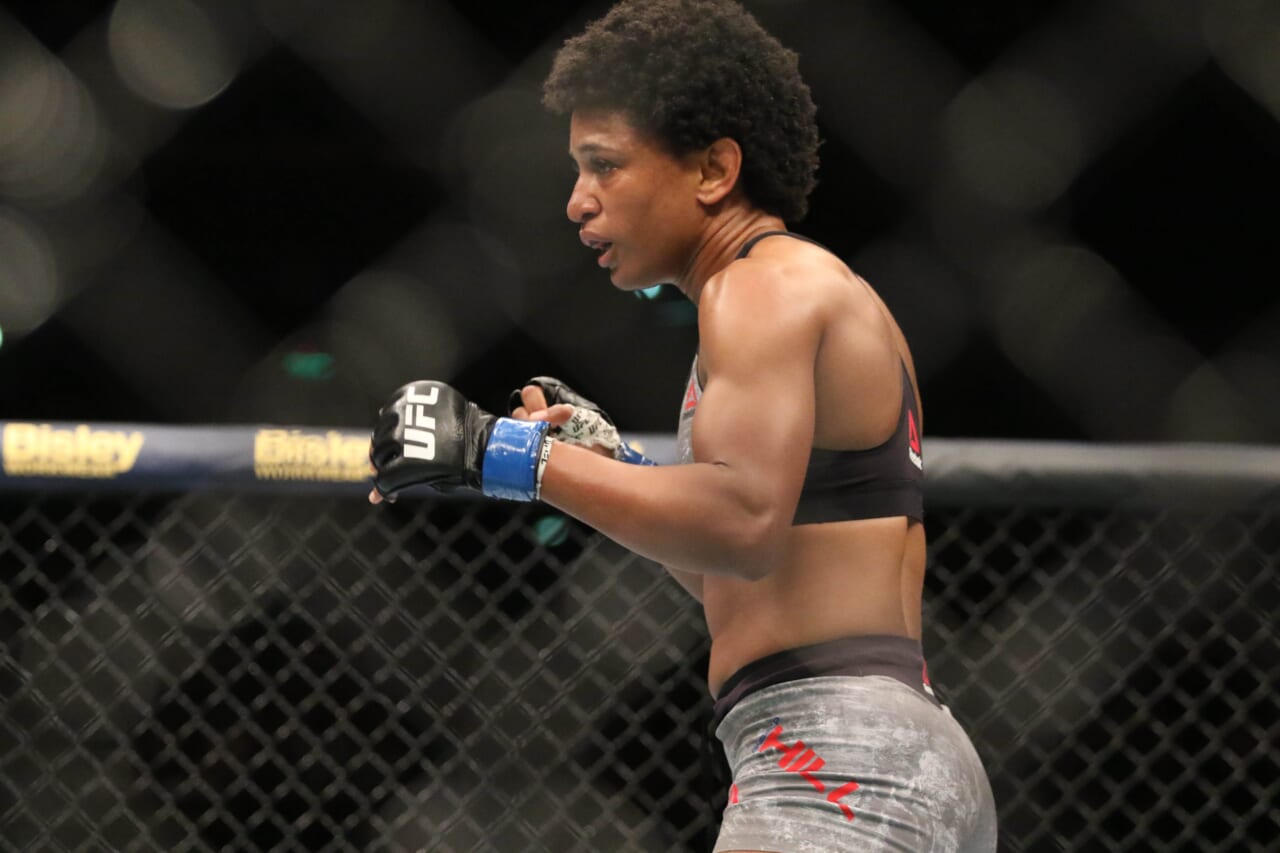 Tonight, the UFC hosted it’s tenth fight night from their APEX facility. It was a night full of fantastic matchups. In the main event of the evening, there was a highly anticipated matchup between strawweights Michelle Waterson (17-8) and Angela Hill (12-8)

The two top 15 UFC strawweights were looking to take the next step towards title contention tonight. Both were coming off of losses in their last UFC contest, but a win for either, would be a big step in the right direction.

Waterson and Hill deliver in an instant classic

Both of these ladies came to fight tonight. The two top UFC strawweight contenders both had big moments in the fight. I was blown away early on by Angela Hill’s hands early on in the fight. In the first round, her hands looked extremely crisp.

Waterson then came back in the second round with some solid adjustments. Hill was still landing big shots, but Waterson shifted to using more of her hands which found her some success. Both ladies were putting on an incredible pace while throwing big shots at the other in the first two rounds.

In the third round, Hill really started letting her hands go. She bloodied Waterson’s nose, but the Karate Hottie landed a big takedown that changed the course of the round. Waterson dominated the third round with her superior grappling.

In the fourth round, Waterson really tried to get the fight back to the ground. However, Hill did a fantastic job of defending. Both ladies had some really good moments on the feet in the fourth round. I had the fight even going into the final round.

The final round featured these top UFC strawweights not giving an inch. Both ladies were throwing everything that they had trying to put a stamp on the victory. The final round was razor close, but I did lean towards Hill with her work in the final minute.

After 25 minutes of back-and-forth fighting, @karatehottiemma and @AngieOverkill embraced in the Octagon ðŸ¤ #UFCVegas10 pic.twitter.com/Kyf5gpKQws

UFC Vegas 10 delivered a very solid night of fights. One of the standouts was Bobby Green (27-10-1), who won his third fight in the last three months. Green defeated Alan Patrick by unanimous decision. Last year, Green seemed content with walking away from the sport, and now he’s on a massive career resurgence in 2020.

Andrea Lee (11-5) and Roxanne Modafferi (25-17) had an extremely entertaining fight. The two top ten UFC flyweight contenders went back and forth over three rounds. In the end, Modafferi was able to secure a unanimous decision. The third straight close loss for Lee.

In the co-main event of the evening, Ottman Azaitar (13-0) blew me away. The bulldozer came in undefeated, but he was an underdog to Khama Worthy (16-7) who had won seven straight fights. Azaitar ran through Worthy knocking him out in the first round.

Throughout 2020, the UFC has been hit with some cancellations due to COVID-19. However, one that stings really bad is losing the main event for tomorrow night’s fight night. Thiago Santos and Glover Teixiera were due to battle in a title eliminator.

However, after Teixiera tested positive, the UFC pushed the fight back. Now, the UFC has bumped up the co-main event featuring Michelle Waterson (17-8) and Angela Hill (12-8). While not the biggest fight on paper, it’s still expected to deliver a solid fight.

This main event pairs two of the top 13 fighters in the women’s strawweight division against each other. For The Karate Hottie, she’s looking to break her current two fight losing streak in the UFC. Both losses came against former champions.

Between 2018 and 2019, Michelle Waterson went on a run in the UFC. She won three consecutive fights including one against former title challenger Karolina Kowalkiewicz. Following that winning streak, she got a shot against the former champion, Joanna Jedrzejczyk.

Waterson came up short in that fight as she was outclassed on the feet by the former champion. Then she suffered a split decision loss to Carla Esparza at UFC 249. I personally scored the fight for Waterson. Nevertheless, she will look to break her losing streak.

Angela Hill has really turned a corner over the last 12 months. A year ago today, Hill’s record was 9-7, but she went on a three fight winning streak before fighting Claudia Gadelha back in May. Many people thought she should have won the fight, but she lost a split decision.

To me, this is really a matchup of top ten strawweights. Hill is better than the 13th best in the division. Waterson has put together a solid UFC career so far, but she’s always been fighting above her natural weight class since the promotion doesn’t have atomweight.

Waterson is headlining her third UFC event, and while I think she’s very talented, I think this is a tough matchup. Hill has been doing a very good job of using her lengthy punches in her recent fights. A strategy that should really help her in this one score some points.

I expect both of these ladies to have their moments in this fight. For Waterson, she cannot sit back too much. She needs to be active with kicks to score as much as she can. I just think Hill is ready to take that next step in the strawweight division.

The Rest of UFC Vegas 10

While not the sexiest card the UFC has put together, there are definitely some solid fights up and down the card. I’m anxious to watch the fight between top ten flyweights, Roxanne Modafferi (24-17) and Andrea Lee (11-4). The co-main with Khama Worthy (16-6) and undefeated Ottman Azaitar (12-0) should be fantastic.

The prelims also have some solid action including Roosevelt Roberts (10-2) taking on Matt Frevola (8-1-1). Those two have had some back and forth. Again, not the biggest card in terms of name recognition, but the UFC is putting forth a card that should deliver on action.