The two top eight bantamweights will meet at UFC 265 on August 7th. Pedro Munhoz will be trying to pickup his second consecutive win as he tries to become a title contender at 135 pounds.

We last saw Munhoz in February when he had his rematch with Jimmie Rivera. Munhoz used his devastating leg kicks to chop down Rivera and pick up a decision win. That win was Munhoz’s first win since UFC 235 in March of 2019.

Prior to that victory, Munhoz had lost decisions to Frankie Edgar and Aljamain Sterling. Before losing those two fights in a row, Munhoz had a knockout win over former UFC bantamweight champion Cody Garbrandt.

This is a massive opportunity for Munhoz against one of the bigger names in the division. If he can defeat Aldo in August, Munhoz will likely be in a good position to get a title eliminator in his next matchup.

Jose Aldo will also be looking to pick up his second consecutive win at UFC 265. Aldo picked up his first victory in the bantamweight division back in December when he defeated Chito Vera by decision.

The long-time featherweight champion made the drop to bantamweight late in 2019. At UFC 245, Aldo took on Marlon Moraes in his divisional debut. Aldo lost a decision, but the majority of people believe that he won the fight.

In fact, despite losing, Aldo’s next fight was for the bantamweight title. Aldo lost to Petr Yan at UFC 251 in his bid to become a champion in his second weight class. After that loss, Aldo reset prior to his fight with Chito Vera.

There’s no questioning the fact that Aldo has slowed down a little since the days of his prime. However, even with him slowing down, he’s still one of the very best the UFC has to offer. If he can defeat Munhoz in August, he will be right back in the title conversation at 135 pounds.

The UFC has finalized a fun middleweight matchup for their August PPV. ESPN’s Brett Okamoto was the first to report today that the promotion had finalized a matchup between Uriah “Primetime” Hall (17-9) and Sean Strickland (23-3).

The matchup between top fifteen contenders will take place at UFC 265 on August 7th. For Sean Strickland, he’s going to be searching for his fifth consecutive victory inside the octagon.

Strickland made his UFC debut back in 2014 and originally fought at welterweight. In fact, one of his three losses in his career came against the current UFC welterweight champion Kamaru Usman.

However, Strickland has looked like a different fighter since moving up to 185 pounds. He’s won three straight at 185 and his performances have led to the UFC giving him this shot against Hall in August. If Strickland can pull off a victory in August, he will jump into the top ten and be inching his way closer to the top.

When Uriah Hall was on the Ultimate Fighter, everyone believed that he would be a future UFC champion. The guy had the skill and the talent. Hall seemed like the total package. However, he just couldn’t quite put everything together.

Every time he would get close to the top, he would stumble. However, he now appears to be coming into his own and he’s currently riding the biggest winning streak of his UFC career at four straight.

The last time we saw Hall was at UFC 261. Hall became the first man to win by TKO without having landed a single strike. Chris Weidman of course threw a brutal leg kick that was checked perfectly by Hall. Weidman’s leg snapped and Hall got the victory.

That win comes on the heels of Hall’s TKO win over Anderson Silva. While he’s ranked higher than Strickland, this is going to be a very tough test for Hall. If he wins, he might just be another win away from a UFC title shot.

Last month at UFC 260, Francis Ngannou (16-3) knocked out Stipe Miocic (20-4) to become the undisputed heavyweight champion. After the fight was over, the attention immediately turned to the super fight between Ngannou and Jon Jones (26-1, 1 NC).

Jones is widely considered to be the greatest fighter in UFC history. Last year, he vacated his light heavyweight title in order to prepare for his move to the heavyweight division. The fight everyone wanted looked like it was going to happen.

However, financial negotiations never got off to a good start. There never was any positive momentum with the UFC and Jones and as of right this second, the fight appears to have no life.

With that, the promotion has moved on to the number on contender Derrick Lewis (25-7, 1 NC). The Black Beast has won four fights in a row. He’s coming off of a highlight reel knockout over Curtis Blaydes.

Lewis and Ngannou have already fought once back at UFC 226. The fight was expected to deliver a knockout, but instead, both men looked tentative and Lewis went on to win a decision due to a little more activity.

Lewis spoke to ESPN’s Ariel Helwani where they talked about the rematch with Ngannou. The Black Beast said that the UFC offered the fight to both men for June, but the heavyweight champion wanted to go back to Cameroon and take some time off.

With that, Helwani followed up asking about when the next target is. Lewis responded with, “August is looking real good right now.” That would likely be slated for UFC 265 which already has the title fight between Amanda Nunes and Julianna Pena.

From all indications, this appears to be the date the UFC is pushing for. There is positive momentum towards this fight, but there is one thing that can throw a wrench into it all. That thing is Jon Jones.

The former UFC light heavyweight champion parted ways this week with his management. We don’t know if that was due to the failed negotiations, but it’s something to keep an eye on. I wouldn’t rule out Jones ultimately getting the fight, but right now the smart money is on Ngannou – Lewis 2 headlining UFC 265. 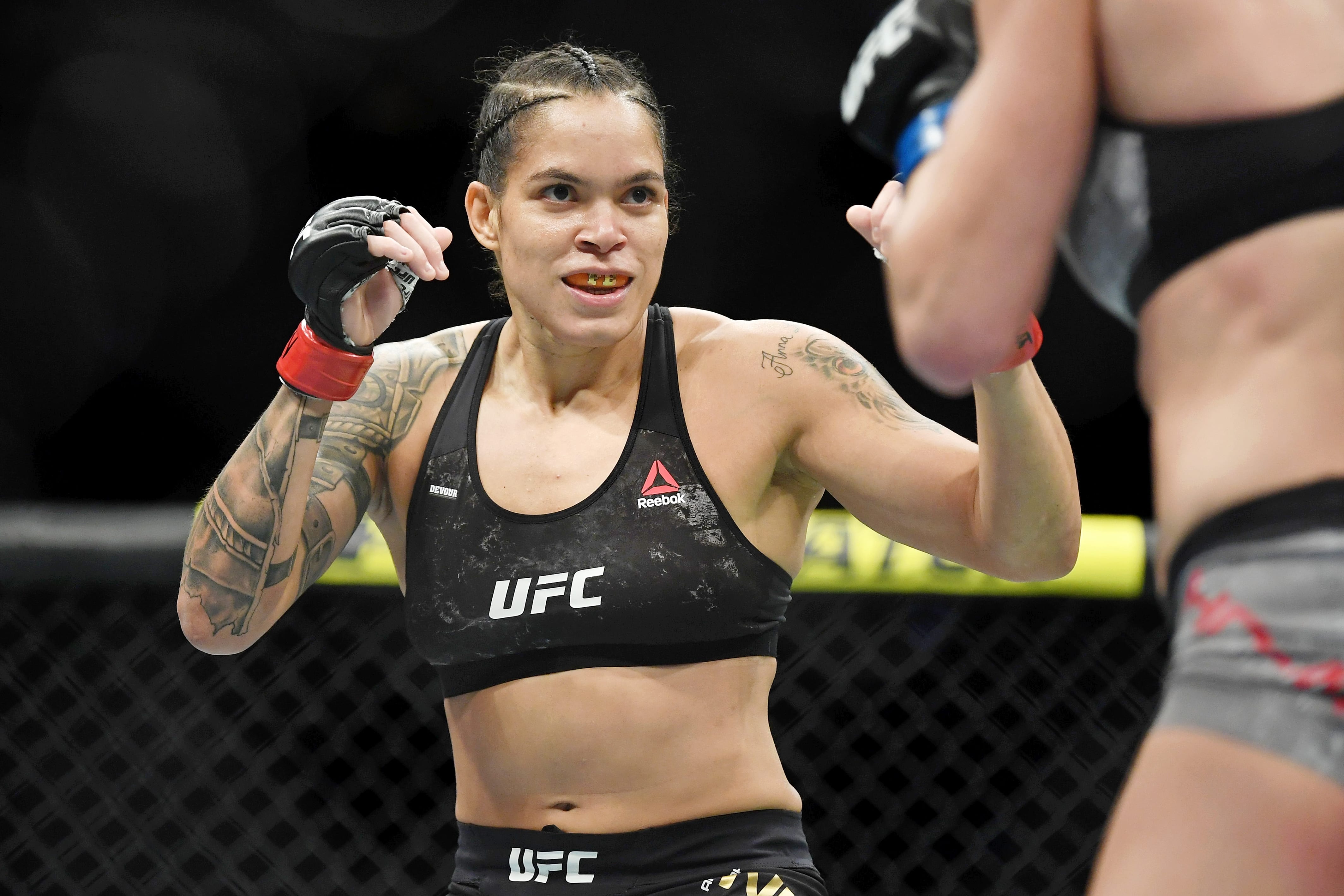 Amanda Nunes (21-4) is officially set for her first UFC bantamweight title defense since December 2019. Dana White told ESPN’s Brett Okamoto today that The Lioness is returning to bantamweight in August to defend her title against Julianna Pena (10-4).

You can imagine that this matchup at UFC 265 is going to have a ton of heat behind it. Back at UFC 257, Pena defeated Sara McMann by third round fear-naked choke. After the fight was over, she started calling for a fight with Nunes.

Pena stated that the UFC‘s two-division champion had been ducking her for years. The callouts were odd to me considering where Pena was in the division. The Venezuelan Vixen is just 2-2 in her last four and was put to sleep against Germaine de Randamie last October.

Nevertheless, the trash talk seemed to work and the UFC decided to give Pena the fight. If the current rankings hold, Julianna Pena will enter the cage in August as the sixth ranked bantamweight.

Amanda Nunes is the greatest of all time and let’s be clear, Julianna Pena really doesn’t deserve this shot at UFC 265. Her resume doesn’t exactly make her the number one contender. Especially considering the top contender just put her to sleep six months ago.

However, Pena called out the champion and that’s what she’s getting. Nunes has defeated the best the UFC has to offer at both 135 and 145 pounds. Pena is one of the few bantamweights that Nunes hasn’t had the privilege of fighting yet.

Perhaps that had a lot to do with this booking as well. Either way, it should be a fun buildup to UFC 265. The last time we saw Nunes was last month when she demolished Megan Anderson at UFC 259.

The win was Nunes’ second straight defense of her featherweight title. Now, Nunes will return to the division that made her a champion for the first time. This should be a fun matchup when August rolls around.