For the New York Yankees, this has been a season of inaction as they wait out the negotiations to retain DJ LeMahieu in pinstripes. Those negotiations are at a standstill as the sides are far apart. LeMahieu, after having one of the best seasons in baseball in 2020, has indicated that he would like to stay in New York; he likes playing there and likes his teammates. But as much as he feels that way, he also realizes he is worth much more than the $24 million he got from the Yankees before the 2019 season.

Knowing his value to the Yankees, he has upped his demands, and he wants to double his last contract and for a full five years. The Yankees want three years, but that is not good enough for LeMahieu, who is more interested in his security through the age of 37 when he may well retire from the game. Meanwhile, the Yankees’ biggest need remains pitching. New York Yankee fans would like to see the team hire Trevor Bauer, the best starter in free agency. But with the recent news that Bauer wants a $200 million contract, the likelihood of that happening is the same as “The Boss” coming back to life to make it happen.

The reality is that the Yankees have no money to make anything big happen for two reasons. One is that owner Hal Steinbrenner has said he wants to cut payroll, and the other is that the Yankees lost so much money last year, with an unclear year ahead. The will most likely result in the Yankees going the trade route or picking up some cheap pitching help both in the starting rotation and to fill holes in the bullpen. Here are some potential targets that wouldn’t break the Yankees bank.

Homer Bailey’s best days are behind him, yet he is a veteran that could eat up a lot of inning for the Yankees on a short and cheap contract. There are two reasons that Bailey could come to the Yankees on the cheap. He had an injury-plagued season last year with the Minnesota Twins where he pitched only eight innings on the year, but he did pitch to a 3.38 ERA.

Bailey spent twelve years with the Cincinnati Reds and short stints with Kansas City, Oakland, and the Twins. At age 34 and with his injury history last season, he would probably only cost the Yankees something in the $2 million range. There is not much downside to the Yankees taking a chance on the veteran.

Rich Hill is another risk the New York Yankees might be interested in for a short contract. The 16 year Veteran starting pitcher will be 41 at the start of the 2021 season but has not had a losing year in the last 7 years. This is more than can be said for the Yankee departing pitchers. Rich Hill threw 38.2 innings across eight starts in 2020, suffering just a single setback of a sore shoulder and evading a recurrence of the myriad blister issues from seasons past.

Hill would probably cost the Yankees in the same $2 million range due to his age and injury history. Yet, there is a minimal downside to a deal. His career 67-44 career record is surely attractive, and his age doesn’t seem to be an issue as his career ERA of 3.79 has been less in the past 5 years. He also knows Yankee Stadium; he pitched 14 games for the Yankees in 2014.

Tyler Chatwood would be the most costly to the Yankees of the three pitchers in this article but could be gotten far cheaper than in 2019. Chatwood, like many pitchers, didn’t have a good year last season for the Chicago Cubs. He went 2-2 with a 5.30 ERA, which will significantly drag down his $13 million in earnings for 2020.

Chatwood has always had tremendous potential that has never been fully realized. He is known as the spin rate king. If Yankee pitching coach and harness that, he could be the one to turn Chatwood into a star. If the Yankees can get him for $5-6 million on a one year deal, it could have big-time rewards for the Yankees. 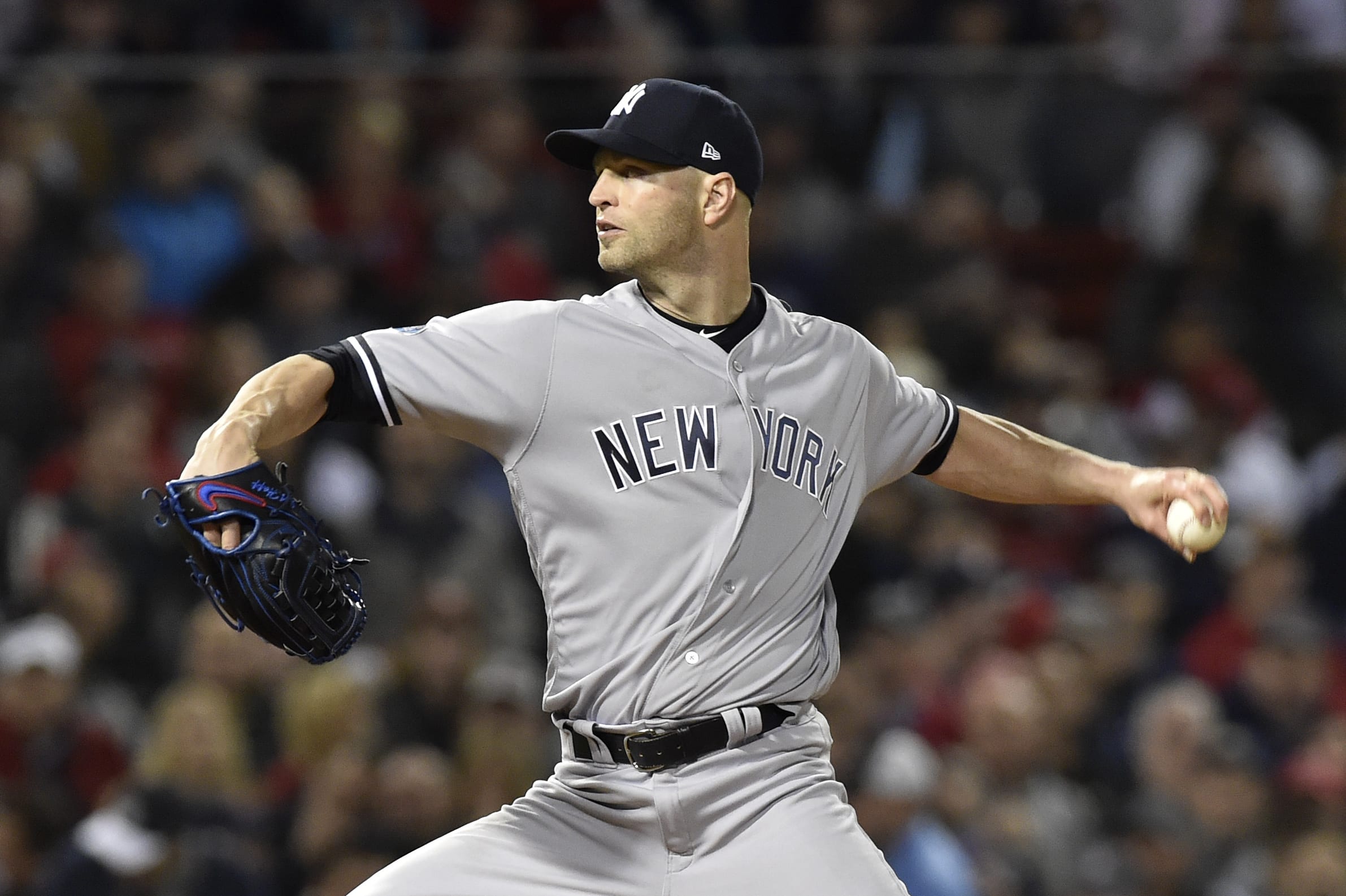 In a year that the New York Yankees will aim to improve their starting rotation, they find themselves cash short and wondering what a 2021 season will look like. As the Yankee brass sits at their desks, they have no feel for if there will be fans in the stands or will lose even more money next year. They also are not oblivious to the fact that the coronavirus has left many out of work and unsure of their future, a future where they may not afford tickets and baseball merchandise.

This entire situation is also not good for free-agents that may not get what they would have expected due to the virus and clubs looking to save money. Strangely, the clubs and players’ answer may be to accept less money and be more inclined to offer and accept short one or two-year contracts than they normally would.

There is a log jam of available pitchers out there; there are a few that any team would want to sign but may be too expensive this offseason. But looking carefully, there may be some off-the-radar intriguing picks that would be, for the most part, economical. The first on the list might be the most surprising of all to New York Yankees fans.

Yes, he was a Yankee last year, and yes, the Yankees did not give him a qualifying offer after missing his vesting option. Yankee fans know that when he is hot, he is unhittable. In 2018 J.A. Happ joined the team before the trade deadline and did nothing but win; he went 7-0 in eleven starts. In 2019 he was 12-8; that’s not bad either. In this shortened 2020 season, he had the second-lowest ERA  next to Gerrit Cole with all the controversy.

Both Masahiro Tanaka pitched to the same winning percentage, but Happ’s ERA was lower. The big difference is the Yankees are contemplating taking Tanaka back, but not Happ. Happ had one horrible game that began his season and spoiled a low ERA that could have been lower. In August, he pitched to an ERA of 2.81; in September, he pitched 29.1 innings for an ERA of just 3.07. Included in those games was an eight-inning shutout of the Red Sox.

But with the seemingly bad relations between him and the Yankees, it’s doubtful the Yankees will consider the 38-year old for even one year.

Shoemaker might not seem like a pitcher that the New York Yankees would be interested in, but looking closer, he has some upsides. His ERA is not something that would draw attention to him. He also hasn’t pitched a lot in the last three years. This would make him more likely to accept a one year deal on the cheap. Of lower-tier free agents, he has above-average stuff. Interestingly his fastball velocity was up nearly 3 mph compared to last season. Smyly, Ray, and Gausman’s fastball were up less, but all of them were already signed.

Walker is often talked about as a mid prize free agent. He pitched exceptionally well for the Toronto Blue Jays last year. You often hear that a pitcher pitched better than his stats show, but with Walker, it’s the opposite; he didn’t pitch as well as his 2.70 ERA. Nonetheless, he is a good pitcher that might be a fit for the Yankees. His four-seam fastball is his best pitch, whether you look at process or results. It’s the only pitch he has that gets above-league-average whiffs. While with the Jays, he constantly changed up his pitches, which led to success, which could bode well for whatever team lands him.

Chatwood is also another pitcher that might look kindly on a short term contract. Chatwood has not been the best pitcher in his career but performed an amazing makeover in his last years with the Chicago Cubs. His record with the Cubs is 11-11 with an uninspiring ERA. Chatwood threw harder last year than he ever has in his career. The 30-year-olds 94.9 mph average four-seam fastball velocity is the best of the four pitchers in this article.

Chatwood is a fastball pitcher, but he has more recently thrown more curveballs and with a high spin rate. He also threw a cutter more often than in the past, making him a truly three-pitch starter. By throwing harder and using more pitches, the Yankees may see that as an upside.

As I evaluate these four pitchers, it appears to me that J.A. Happ may be the best option for the New York Yankees if the two can repair their relationship.