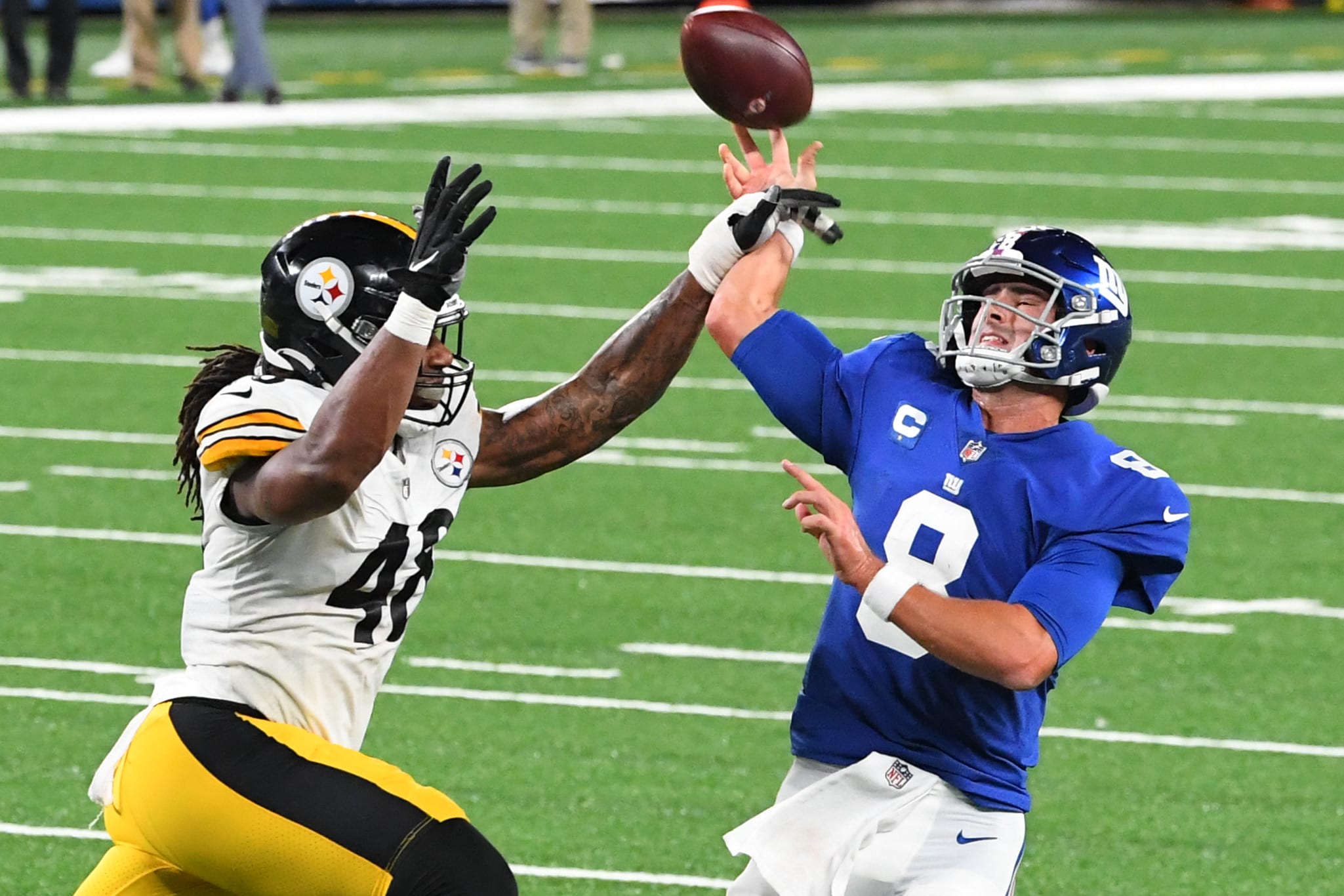 Much has been said about New York Giants quarterback Daniel Jones two weeks through his second NFL season. Already, fans are campaigning for the Giants to tank the season, get the first overall pick, and draft Clemson’s Trevor Lawrence. The Giants have played two games in the 2020 NFL season, mind you.

Granted, New York has lost those two games. But they also played two of the best defenses in the NFL while trotting out aa brand new offensive line. The Giants were never expected to win those games, so why are fans in such a panic? Well, apparently, Daniel Jones is turning the ball over at an “alarming” rate. Is he really? Or are fans just used to their seasons ending in September, and subsequently freaking out over a few bad plays?

Daniel Jones turned the ball over twice in Week One. Daniel threw two interceptions en route to a 26-16 loss versus Pittsburgh. The Steelers have one of the best defenses in the NFL, so it is no surprise that the Giants, who were installing a brand new offensive scheme, struggled against that defense.

Daniel Jones’s first interception was made by superstar edge rusher TJ Watt. On that play, Jones was targetting Evan Engram on a short route. Engram was well-covered on the play, but not by TJ Watt. Watt read Jones’s eyes, jumped up, and made an incredible interception. It is hard to fault Jones here. Daniel did not throw into coverage and the coverage-man made the play. He threw to a receiver and a defensive lineman picked the ball out of the air.

So, most fans decided we could give Daniel Jones a pass on this play. He was not really at fault for TJ Watt making a spectacular defensive play. But Jones’s second turnover was horrific.

On his second interception, Daniel Jones had multiple opportunities to take a sack or throw the ball out of bounds. While rolling out of the pocket, Jones held the ball way too long and floated a poor pass (after his arm was hit) into the end zone that was intercepted by defensive lineman Cameron Heyward.

This interception was completely avoidable. This play killed a 19-play drive that would have been the best of Daniel Jones’s career. This was an ugly turnover, but has Jones made any more head-scratching decisions like this?

In Week Two, Daniel Jones once again turned the ball over twice. Once again, Jones was facing one of the best front-sevens in the NFL that features Khalil Mack and Robert Quinn off the edges. Quinn and Mack got the best of the Giants’ offensive tackles in this game.

Jones threw one interception and lost one fumble in this game. But does he deserve blame for both of these turnovers?

Undoubtedly, Daniel deserves blame for the fumble in this game. Check out this play breakdown to understand why:

This one is on Danny. Needs to get the ball out quicker. Can't hesitate to throw to an open WR.

But he learned from this & corrected the error later in this game (check next tweet in thread). #Giants #TogetherBlue pic.twitter.com/SpOc8vGEs5

Jones, once again, held onto the football too long here, resulting in a fumble. But later on in that same game, Daniel found himself in a similar situation. Instead of fumbling the ball, Jones put two hands on the ball and fell forward to ensure he lost as little yardage as possible.

So yes, he deserves blame for that turnover. But he also deserves some credit for learning from it and not making the same mistake twice. What about his other turnover from this game?

Daniel Jones threw an interception in this game as well. On this play, Jones was once again targeting Evan Engram. Unfortunately, Engram slipped coming out of his route and was on the ground when Jones threw the ball. The ball was intercepted because of this. It is hard to blame Daniel Jones for this interception.

So, through two games, Jones has turned the ball over four times. Two of them have been his own fault, one of them was a spectacular defensive play, and the other one was the fault of the intended receiver.

Last season, Jones fumbled the ball 18 times in 13 games. So far, has fumbled once in two games and fans are ready to move on. Daniel Jones has started a total of 14 games in his career. He is young, he is learning, and he is improving. Giants fans need to be more patient with their quarterback. There are fourteen games left in the 2020 NFL season. Let’s table the Trevor Lawrence conversation for now.