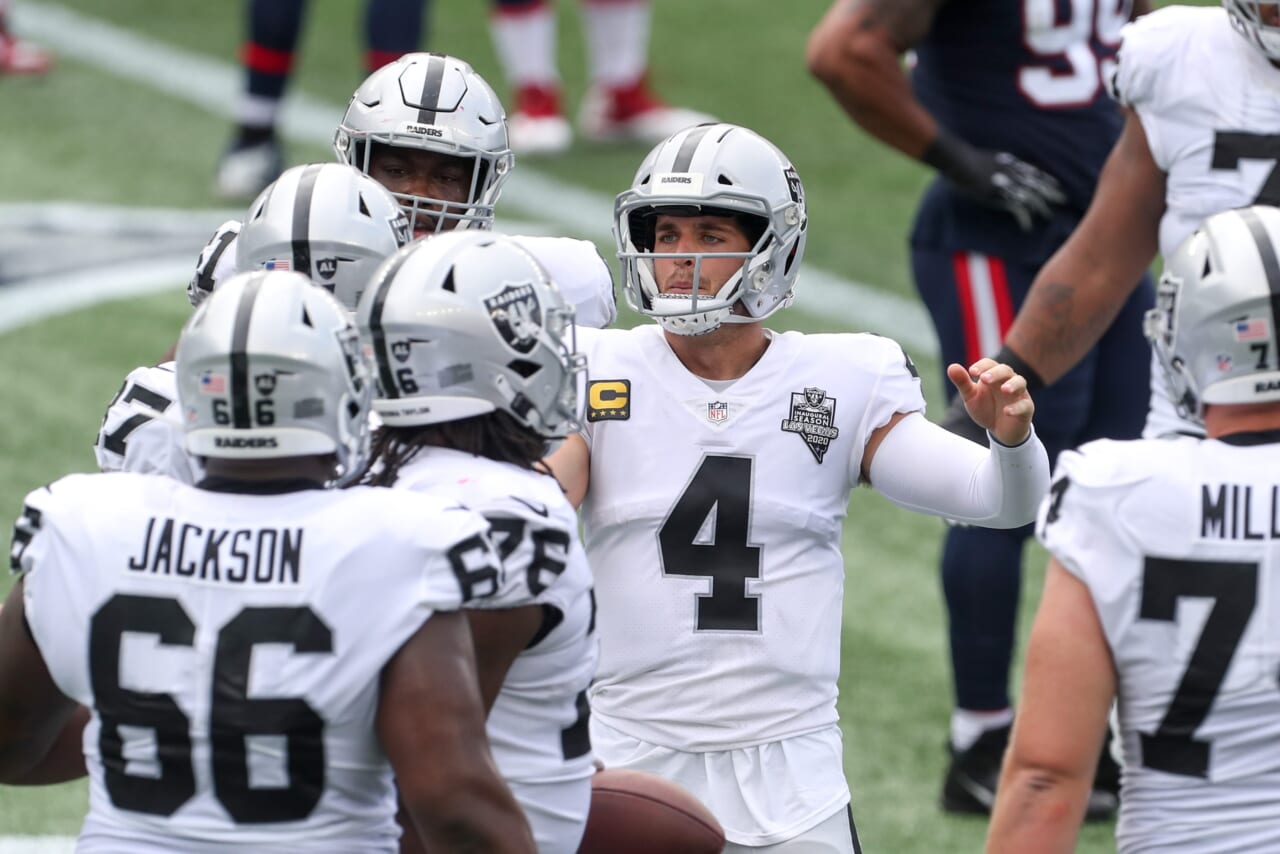 The Buffalo Bills look to hit a 4-0 jackpot in Sin City, as they battle the Raiders in a Sunday late afternoon showdown.

Las Vegas has a way of ending streaks of good luck. The Buffalo Bills certainly hope that isn’t the case when they make a visit on Sunday.

The Bills (3-0) look to keep the good times rolling in America’s Playground, as they prepare to do battle with the Las Vegas Raiders. Buffalo is one of seven undefeated teams left in the NFL.

That streak was kept alive by a gutsy 35-32 win over the Los Angeles Rams last Sunday. The Bills earned a 28-3 lead by the middle stages of the third quarter, but Los Angeles fought back to take the lead in the fourth. Buffalo would avert disaster by embarking on an 11-play, 75-yard drive that ended with Josh Allen’s three-yard game-winner to Tyler Kroft. It was the last of Allen’s 311 yards and four touchdowns, while Kroft earned his second score of the day.

On the other side, Las Vegas (2-1) battles its second consecutive AFC East opponent after falling 36-20 to the New England Patriots at Gillette Stadium last weekend. Derek Carr threw for 261 yards and two touchdowns in defeat. The Raiders return to Allegiant Stadium for the first time since their nationally televised win over New Orleans in Week 2 that opened the 65,000-seat facility.

This will mark the first time that the Bills will face the “Las Vegas” Raiders. They were 14-17 against the Oakland incarnation, and the Raiders lead the all-time set 21-20. Buffalo fell in their most recent visit to the Raiders’ organization in 2016 but won the last overall meeting when the then-Oakland Raiders visited Orchard Park a year later. LeSean McCoy picked up 151 yards and a score as the Bills earned a 34-14 decision.

The last time the Bills played a Raiders team that wasn’t in Oakland came in the 1993-94 AFC playoffs. Down 17-6 to the Los Angeles Raiders in the late stages of the divisional round’s first half, the Bills enjoyed a touchdown from Thurman Thomas in the final minute. Despite a Bill Brooks touchdown from Jim Kelly and Steve Christie field goal in the third, the Raider took a lead into the final frame on an 86-yard connection between Jeff Hostetler and Tim Brown.

Brooks, however, came up big once more, earning another scoring grab from Kelly in the early stanzas of the fourth. Buffalo ran out the final six minutes on a lengthy final drive mostly sustained through runs from Kenneth Davis. Bruce Smith also became the all-time sack leader in NFL playoff history, passing Richard Dent. The Bills used the momentum from the triumph over Los Angeles to top Kansas City a week later before falling to Dallas in Super Bowl XXVIII.

“Offensively, I think (Josh Allen) has a good grasp of what we do. We try to tailor things to his strengths as best we can, as a coaching staff. But he’s got other pieces that are helping. It’s a group effort.”-Bills offensive coordinator Brian Daboll on the offense, per Chris Brown

â€œThe quarterback is eye-opening. He is a fun guy to watch, man. He can really throw the ball. Heâ€™s got a great playing style. Heâ€™s got a lot of John Elway playing style. He can scramble, heâ€™s strong, heâ€™s tough. Heâ€™s a big-time player. And theyâ€™ve got an arsenal around him.â€-Raiders head Jon Gruden on Josh Allen, per Josh Dubow

Another great recovery and PBU by Trayvon Mullen. Good position maintenance from Mullen on the break. #RaiderNation pic.twitter.com/YM8UzcJVkK

Stefon Diggs was brought in to give Allen a big-play target. For all intents and purposes, the trade and taking on of Diggs’ big contract has been well worth it.

Through three weeks, Diggs ranks fourth in the league in receiving yardage (288), becoming the gamechanger the Buffalo offense was missing. Allen has an experienced, reliable catcher with a knack for coming through in big situations. It’s admirable what Allen and company have down with homegrown talent and journeymen, but Diggs is proving himself to be the missing piece that was keeping Buffalo from true contention amongst the NFL elite.

Meanwhile, Las Vegas will be without first-round rookie Damon Arnette for the foreseeable future, having undergone thumb surgery, Trayvon Mullen will take over a good share of secondary responsibility. The sophomore corner has been impressing in the Raiders’ resurgence, topping Pro Football Focus’ grades in pass coverage. He’ll likely be matched up against Diggs on Sunday, as each team faces a major opportunity to establish position in the AFC playoff chase at the quarter-mark.

“Itâ€™s going to be a challenge this week,â€ Mullen said of the showdown with Diggs in a report from Case Keefer of the Las Vegas Sun. â€œI know heâ€™s top five in receiving yards right now, which makes me more excited to go against him. Itâ€™s going to be a competitive matchup. Iâ€™m excited and ready for it.â€

The Bills Will Win If…

They don’t try to get too fancy.

The Bills are in rare territory where they have a chance to be 4-0 for only the ninth time in franchise history. Their strategy has been working. There’s no need to change for a game that has taken on increased importance. With the game between New England and Kansas City postponed at the very least, a brighter spotlight will be cast upon a game of two teams seeking football redemption. Las Vegas, after all, is known as the “Capital of Second Chances” by some.

Doubt still follows the Bills, but winning against an equally hungry team two time zones away would certainly send a strong message to the rest of the league, one that would eliminate more doubters. Buffalo also needs to acquire as many wins as they can, as a scary stretch of the schedule awaits. An October 25 reprieve against the Jets notwithstanding and depending on how the COVID testing processes work out, the Bills’ next games come against the Titans, Chiefs, Patriots, Seahawks, and Cardinals. As long as they don’t get caught looking ahead, that desperation should fuel them against the Raiders.

The Raiders Will Win If…

They shut down the Bills’ weapons.

Diggs has been making his catches. A 4-0 start is on the line. If he earns another 300-yard, two-touchdown game, he’ll forever go down in the same sentence as Steve Young and Peyton Manning as the only quarterbacks to earn four consecutive such games. They did so against New Orleans, limiting an aging Drew Brees to short throws underneath and only one touchdown. The Week 1 matchup against Carolina even saw them limit to Christian McCaffrey to 97 yards on 23 carries, his longest carry going only 15 yards.

Buffalo has struck the next level in their development thanks to the arrival of Diggs and Allen reaching the next level of his development ahead of schedule. If Las Vegas can put even the briefest pause in those steps, they’ll be able to earn a big win of their own.

The Bills are in a good place to reach the rare air of 4-0. A visit to Las Vegas provides several trap opportunities, but the sense of desperation with elite competition on the way could fuel them further as they work their way to the dangerous middle portion of their schedule. Additionally, the Raiders are still in a position where topping an undefeated squad is just a little too much to ask for at this point.

This matchup should be one of the more intriguing sights on Sunday with several other high-profile tilts postponed. A win here could be the difference between a division title and a wild-card berth. Right now, the marginal experience the Bills have in the big game department and their modern desperation could well serve as a vital difference in a game filled with implications beyond October.