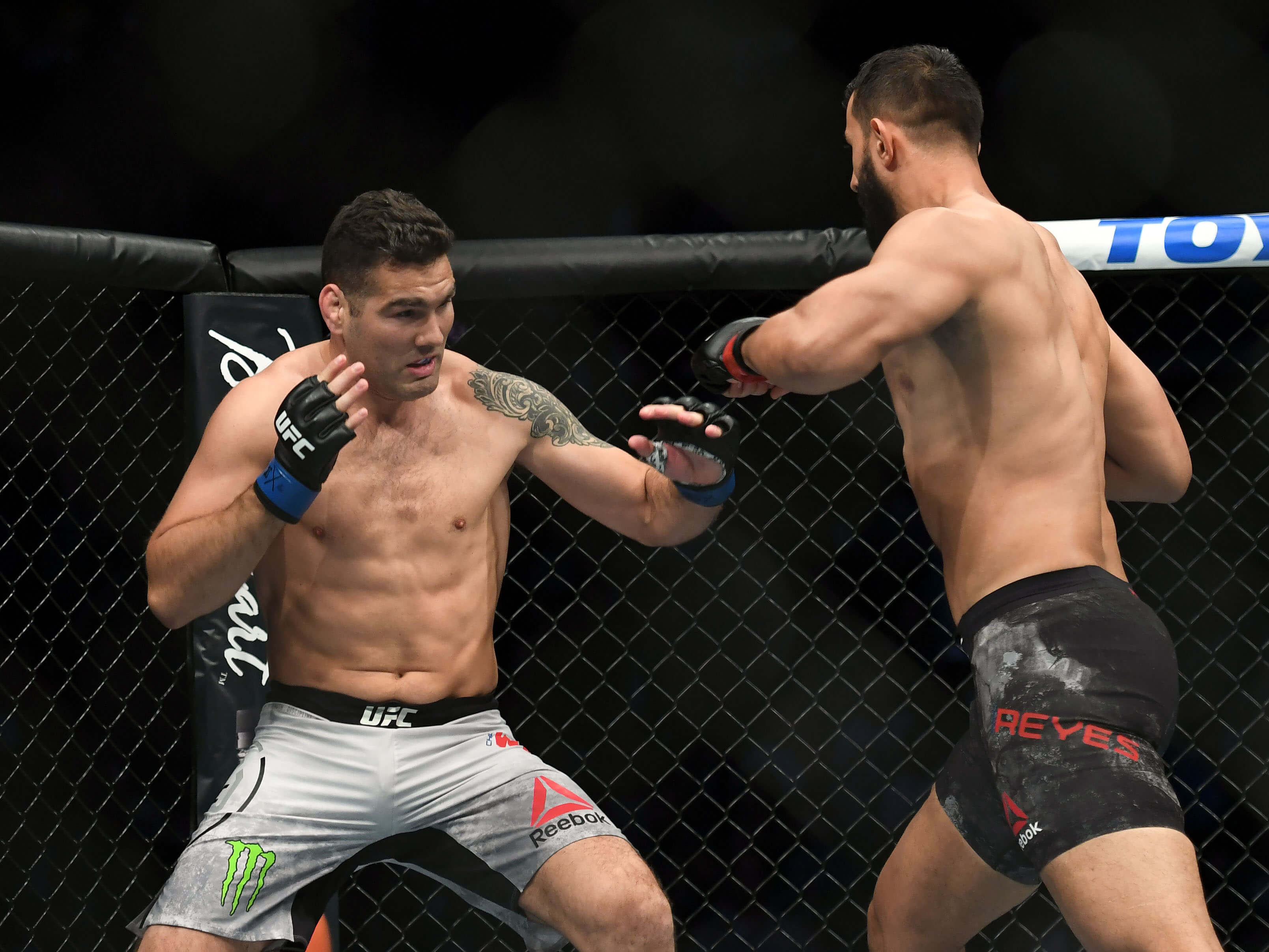 For the longest time, the UFC was struggling to find a fight for their breakout star, Khamzat Chimaev (9-0). Chimaev has stormed onto the scene with three incredible fights and finishes here in the second half of 2020.

However, his impressive performance didn’t get him a spot in the UFC rankings. Most people believe Chimaev is one of the best in the world, but without a ranking, many fighters didn’t seem interested in taking the risk to fight him.

One of the fighters who was interested in the fight was the former UFC middleweight champion, Chris Weidman (15-5). Weidman just made his middleweight return back in August when he defeated Omari Akhmedov by unanimous decision.

When speaking to Submission Radio, Weidman says that he accepted the UFC‘s offer to face Chimaev next. “They offered me Chimaev. I said yes. Then I started to get really excited about it. Then I said, ‘I’ve got a little bit of a rib injury right now.’ I told them that I’d fight whoever in mid-January,” Weidman said.

Obviously, Weidman was one of the names the UFC was interested in for Chimaev. Since the talks with Weidman fell apart, the UFC moved on to book Chimaev against Leon Edwards on December 19th.

Could the former UFC middleweight champion be next?

Weidman made the point that he still wants to fight Chimaev, but only if he’s able to win on December 19th. The former UFC champion said, “If he loses his next fight, the interest would just be completely gone. What’s the purpose of me fighting him?”

The All-American talked about the interest comes from the hype of Chimaev. Given the way the UFC has managed Chimaev’s career so far, I wouldn’t be shocked if he ends up fighting Weidman in January even if he wins on December 19th.

If Chimaev defeats Edwards who is the third ranked welterweight in the UFC, he’s likely going to get a title shot in his next fight. However, with Kamaru Usman – Gilbert Burns not fighting until early 2021, the timeline leaves open another fight for Chimaev.

Chimaev has talked about his desire to bounce back and forth between the welterweight and middleweight division. Don’t be shocked if the UFC still tries to make a fight with Chimaev and Weidman if Khamzat wins on December 19th.

Akhmedov entered the contest ranked 11th in the division. He hadn’t lost a UFC contest since April of 2016. Akhmedov has a tendency to make fights ugly. Many people didn’t know what to expect when Weidman would face him.

Weidman had his back up against a wall. The former champion was no longer a ranked fighter after going 1-5 in his previous six contest. He was finished in all five of those losses.

The All American showed up Saturday night and proved that he can still win at this level. It was an ugly fight, but Weidman got a much needed victory in the UFC. He took time after the fight to announce that he was back.

"I'm back. I'm back at '85."@chrisweidman says he's coming for all the top-tier middleweights after picking up a win at #UFCVegas6 pic.twitter.com/i9kxWbsS9z

What’s next for the former UFC champ?

Weidman made it clear to the top tier guys that he was coming back, but acknowledge his performance wasn’t the best in his post-fight interview. The former champion will definitely have a number by his name when the new UFC rankings are released.

So what does the UFC do with Weidman? While I understand his desire to call out the top guys, he needs to earn those fights with consistent wins. A win over Akhmedov is a step in the right direction, but Weidman really needs to continue to prove himself.

The question becomes, who do you put him in there with? In looking at the rankings, there aren’t a ton of options. I wouldn’t have him fight Gastelum again, and he’s not going to get a shot against guys like Brunson or Hermansson.

I know this would technically be a step backwards in the rankings, but I would have him take on a guy like Marvin Vettori (15-4-1) next. The Italian Dream needs a fight and the UFC is having trouble finding him an opponent.

He’s won three fights in a row and he last lost a very competitive decision to the current champion. If Weidman fights and beats Vettori, you can move him up to a top five opponent given a two fight winning streak and his history.

On the other hand, if Vettori wins, you have a very exciting contender who will be coming off of the biggest win of his career. Not sure the UFC will go this way, but that’s my idea. I think Weidman shouldn’t be rushed. Give him one more guy outside the top tier before throwing him to the wolves.