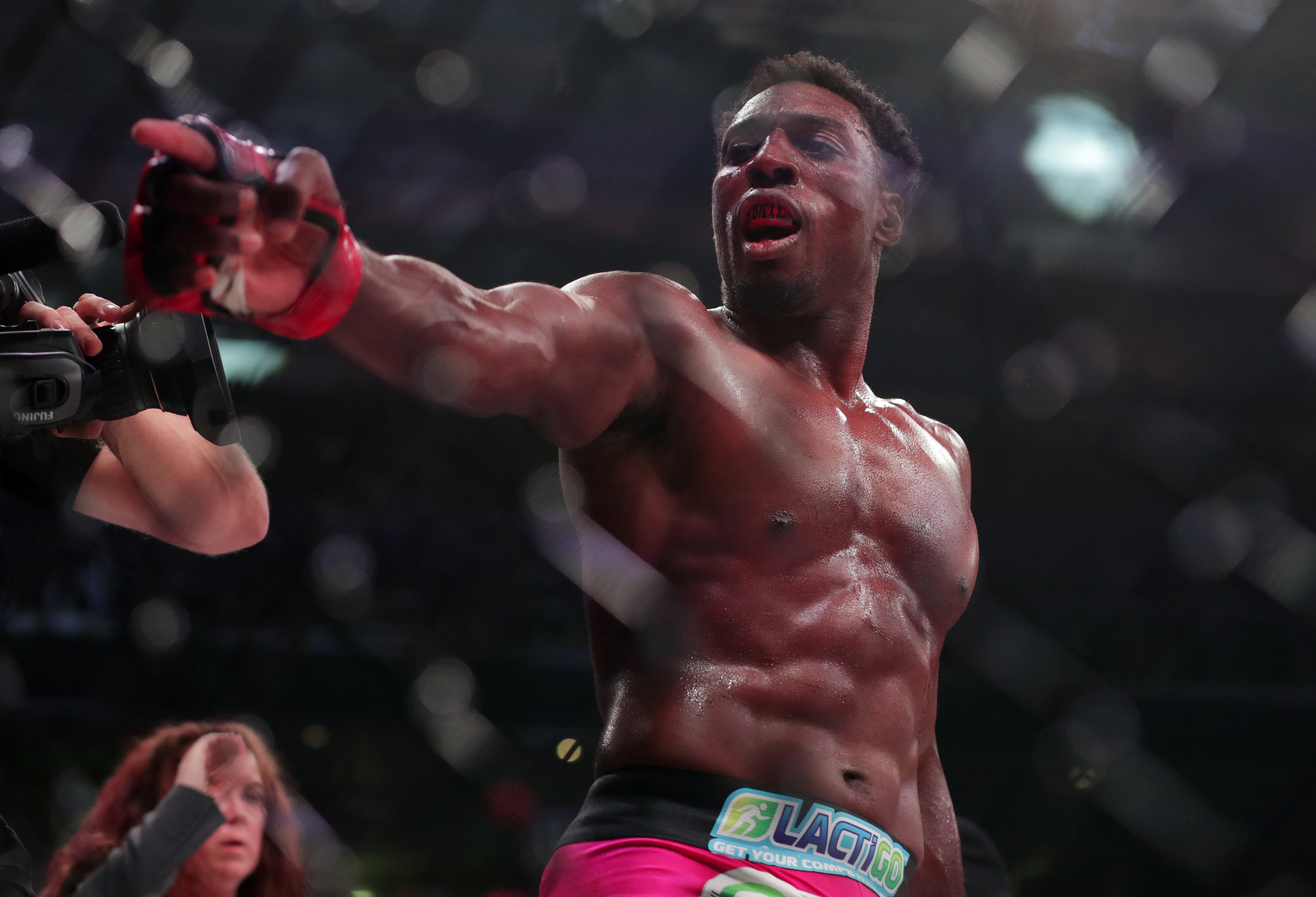 Bellator returned tonight for the first time in a couple of weeks. After a flurry of news that came out today, the promotion put it’s fighting foot forward tonight. In the main event of the evening, Phil Davis (22-5, 1 NC) and Lyoto Machida (26-10) went head-to-head in a rematch.

Seven years ago, the two men went to battle in the UFC. Davis won that fight, but most people believe Machida won that fight. The two men had a chance to settle the score inside the Bellator cage tonight.

Going into Bellator 245, I figured Davis would really try to be aggressive with his wrestling. Point striking with Lyoto Machida just doesn’t seem like the ideal strategy. In the first round of the main event, Davis didn’t shoot for one takedown.

Instead, he seemed content with striking from distance with Machida. To my surprise, Davis did a really good job of landing strikes in the first especially kicks up the middle. The first round could have really gone either way with Machida also landing good shots.

The second round was really strong for Davis. He continued to land decent strikes, but he stayed away from grappling outside of a brief exchange at the end of the round. Machida seemed like he was having a really difficult time pulling the trigger in the second round.

The third round saw a little reversal. Davis seemed to be watching more, and Machida was throwing a lot more. Davis had great success with kicks up the middle in the first two rounds, but completely abandoned them in the third. Machida scored more and easily won the final round in my opinion.

Bellator 245 had an interesting night of fights. One of the things that stood out is that two fights ended in a no contest due to groin strikes. Besides that, it was a solid night of action from the promotion.

In the co-main event of the evening, Cat Zingano (11-4) used a heavy wrestling attack to defeat Gabby Holloway (6-6) in her Bellator debut. One of the shockers of the night was Ed Ruth (8-3) getting caught in a quick heel hook by Taylor Johnson (6-1).

Tomorrow night, the bantamweights will take center stage as Patrick Mix and Juan Archuleta battle for the vacant bantamweight title. Bellator is putting their best foot forward in a rare evening where they go head-to-head with the UFC.

Bellator MMA returns tomorrow night with a solid lineup of fights for their Friday night fight night. In the main event of the evening, Phil Davis (21-5, 1 NC) takes on Lyoto Machida (26-9) for the second time in a light heavyweight main event.

With Vadim Nemkov having just knocked out Ryan Bader at Bellator 244, this is a big fight to determine the next title contender. In addition to this fight, Bellator recently signed Corey Anderson to it’s growing light heavyweight division.

The two men in Bellator 245’s main event do have some history. The history dates back to UFC 163 where Phil Davis was able to win a unanimous decision over Machida in Brazil. The fight was controversial as all 13 media members scored the fight for Machida.

Machida outstruck Davis the entire fight, but Davis landed a takedown at the end of the first two rounds. Those takedowns were enough to win him the fight on the three judges scorecards. Now, these two will rematch seven years later.

Davis has been very good since making the move to Bellator. In ten fights, Davis is 8-2 with his only losses being to Nemkov and Bader. Both of those fights were razor close split decisions.

With Davis you know what he’s going to do. He can strike, but he mainly uses his striking as a way to setup his tremendous wrestling. He will be looking to secure takedowns to defeat Machida once again.

Machida is moving back up to light heavyweight after fighting Gegard Mousasi at Bellator 228 last September. Machida lost a close decision in that contest. The dragon is looking for one final run towards a world title.

The former UFC light heavyweight champion is known for his karate striking. His unique blitzing style stifles many opponents that step across the cage from him. He will be looking to use that striking to outpoint and defeat Davis.

When it comes to a prediction, I think that this fight is going to be razor close. The only way it’s not is if Davis gets Machida down and holds him down. Machida is 42 years old, and I think Davis is much improved from their first fight, but it’s still going to be close.

There are more solid fights on the card for Bellator 245. Cat Zingano (10-4) is making her debut against Gabrielle Holloway (6-5). This is the first time we’ve seen Zingano since her fight with Megan Anderson where a head kick went right into her eye which stopped the fight.

Another fight that is worth tuning into is the middleweight matchup between Ed Ruth (8-2) and Taylor Johnson (5-1). Bellator 245 doesn’t have the biggest names on the card, but it’s a night that should be filled with some solid fights.