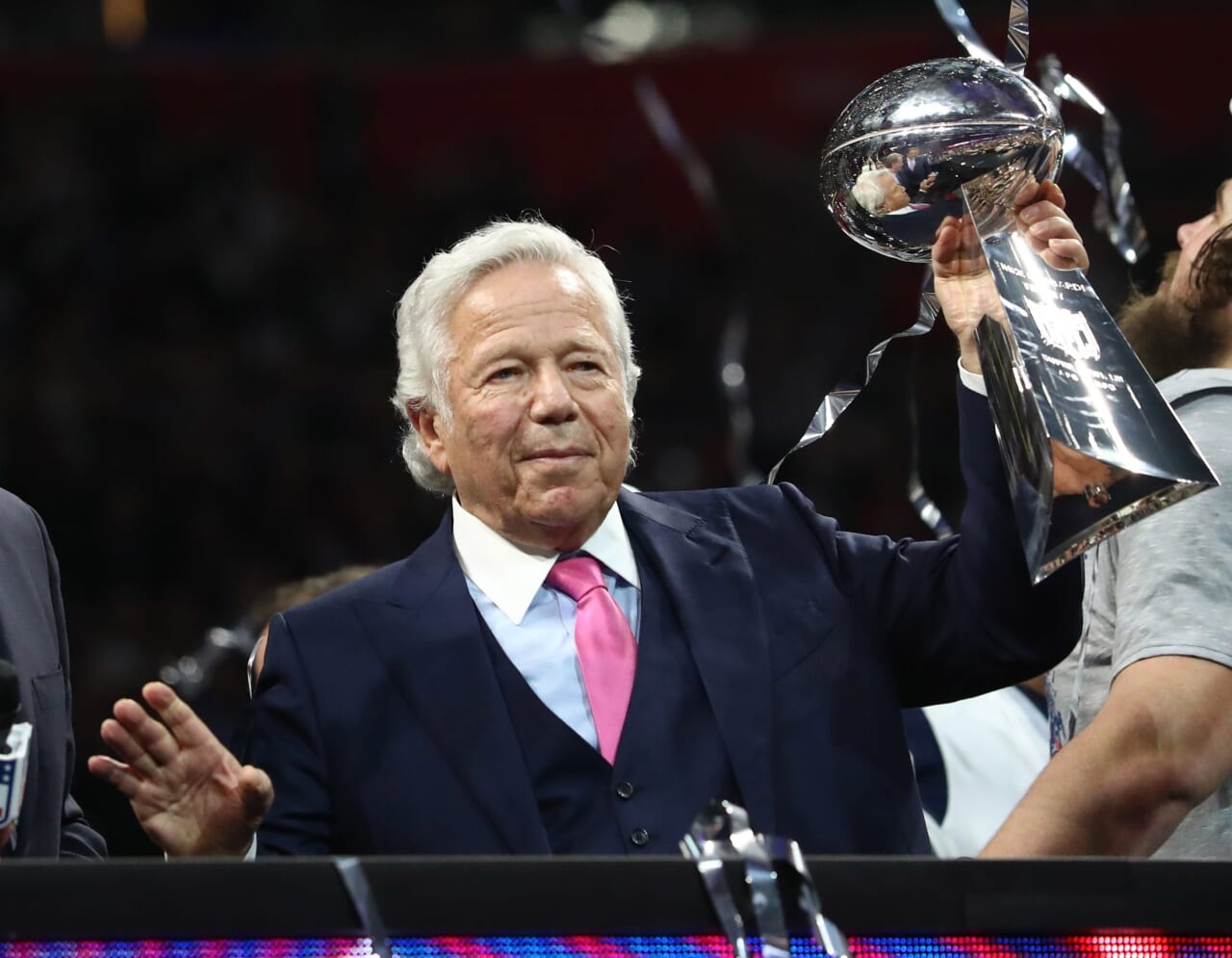 So any big news in the world of sports today? Oh, the owner of the NFL champions, the leagues latest and longest dynasty and one of the most influential individuals in American sports was busted engaging in a prostitution sting in Florida? This story has some interesting tangents to explore for the NFL as a league, Roger Goodell as commissioner, and even the POTUS.

First, let me start by saying this is something that the NFL should not have to adjudicate in any way. It’s essentially a private criminal matter for Kraft and his family to deal with. However, since Serpico Goodell has made any type of mild transgression by anyone who’s ever watched a football game his domain to act as judge/jury/executioner he is going to be forced to take some action on this. The fact its Kraft whose punishment he will be doling out makes it all the more complicated and likely to become a huge shitshow. Mazel Tov!

Goodell and Kraft have a long and complicated history, with Kraft going from one the strongest supporters of the commissioner to a guy who publicly labeled him a duplicitous liar and has convinced an entire region that Goodell actively hates the Patriots.

First, there were the fines and draft picks taken due to Spygate, followed by Tom Brady’s deflated balls and subsequent suspension. Kraft dropped his appeal for the latter because he thought the league would shorten or eliminate the suspension. When neither happened Kraft gave a statement that basically said he dropped the appeal and lawsuit for the good of the league and thoughts that would grant some leniency and that he felt Goodell screwed him. He may have even cried while screaming “Why?Why?”, or maybe that was Nancy Kerrigan. Either way, their relationship was destroyed at that point.

So the first issue is if Goodell can make a decision that won’t be viewed as biased against Kraft. League precedents include Colts owner Jim Irsay is suspended 6 games and fined 500k for drug/DUI related charges and Jerry Richardson being fined 2.75 million for a long pattern of sexual harassment within the Panthers organization. Kraft’s situation is in many ways more serious.

This is a league where conduct towards women is already a huge problem and Kraft is being implicated in a situation with elements of human trafficking,Â  forced prostitution, and there is a video of at least two instances. Even if Kraft goes into a diversion program and avoids criminal prosecution, that won’t be good enough for the NFL. League conduct rules are very clear “It is not enough simply to avoid being found guilty of a crime.

We are all held to a higher standard and must conduct ourselves in a way that is responsible, promotes the values of the NFL, and is lawful.â€ If there is not serious ramifications for this incident I think the NFLPA and their attorneys will get very involved considering the zero-tolerance policy that players have been held to.

So what would a “reasonable” penalty be? It’s too soon to tell as evidence and information are still being released. It’s being reported that the women lived in the spa and that some were there against there will. If true and if reports that they were victims of trafficking are also true I’m not sure any suspension will be long enough. If a video is released or leaked it will make things even worse(although it shouldnt..but the NFL has shown time and again that video makes it harder to sweep away and they want no part of it). Also right now there are 2 incidents recorded, who knows how many times he actually was there or if he did other things like this. If this continues to snowball the league will have to consider its brand and I wonder if his ownership will become an issue.

As the commissioner and the league continue to navigate this there is another element to take into consideration. Robert Kraft is very close to one of the NFL’s most outspoken critics with an audience significant enough to be an issue. Donald J. Trump. Now I know as a sportswriter you never want to get into politics as it can only alienate half your readers, so understand this isn’t about policy but about his impact on the NFL.

His outspoken tweeting during the KaepernickÂ situation, and on the national anthem while not really something that could hurt the league,Â  was an irritant that no one wanted to deal with. The thought of daily tweet storms about whatever action the league takes in conjunction with Kraft and New England fans lambasting Goodell’sÂ ability to be impartial is a recipe for an epic disaster. Factor in the NFLPA and the 90% of fans that hate the Patriots and those sides not thinking any penalty will be strong enough and you have a no-win situation.

The Kraft charges are a serious problem for the NFL and one with no good answer. The league has put itself into this situation by stepping further and further outside the realm of on-field or competition related discipline. It’s always been a slippery slope to hand out punishments with no real set parameters making it all look like it’s based on the whim of Roger Goodell in a given moment. This situation may be where the league finally falls down that slope and has to reassess its role in the off-field conduct of players and owners.