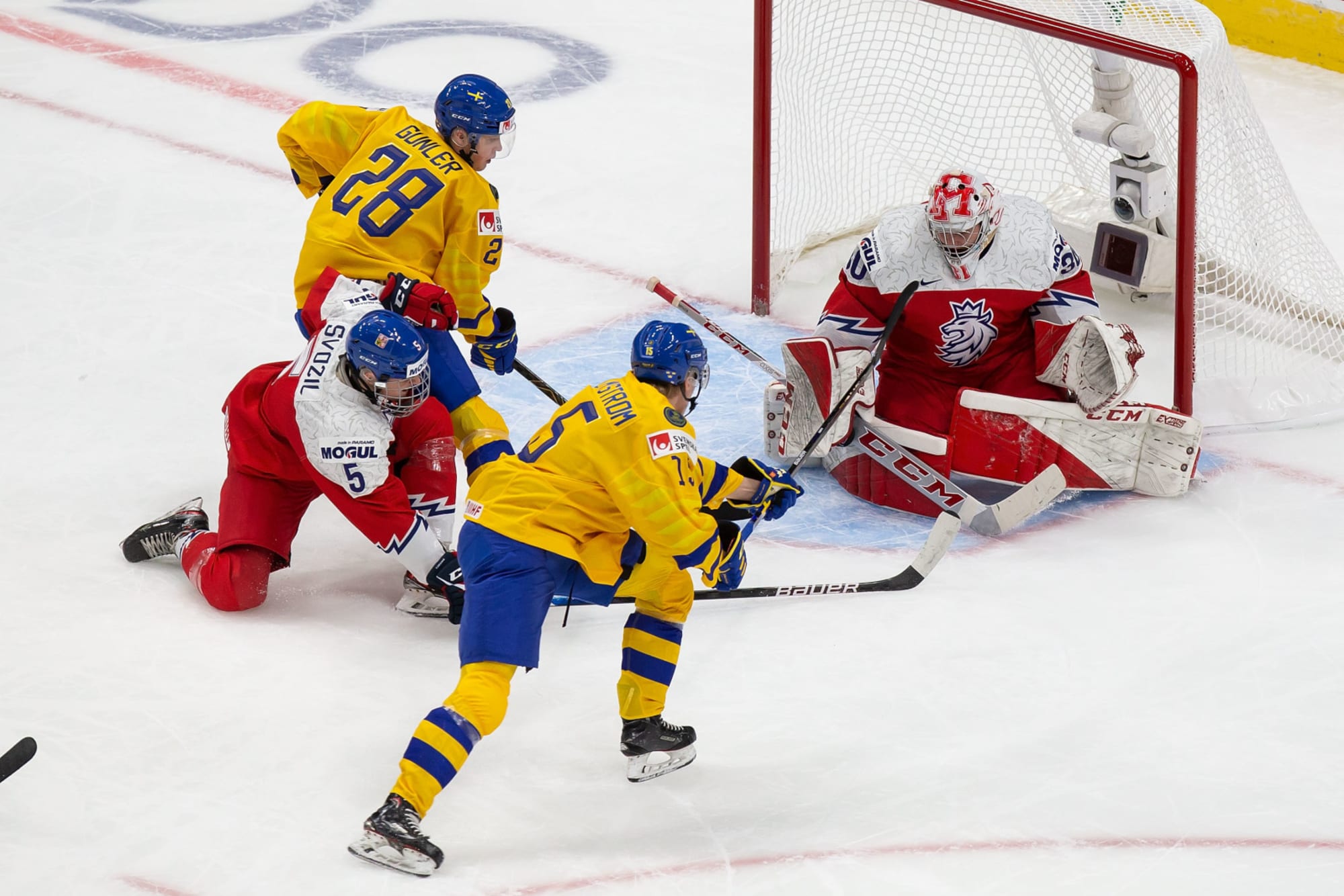 Simon Holmstrom might not be suiting up for the Islanders when they begin the season in two weeks, but he’s showing a glimpse of what the team and fans could expect to see in the very near future.

Holmstrom, the club’s first round pick from 2019, has looked terrific so far for Sweden at the World Juniors in Edmonton.

As of this morning, Holmstrom’s four points have him ranked eighth in scoring in the tournament and the leading point-getter for a loaded Swedish team. “For (Holmstrom) he knows the small rink may be better than most of our guys,” Sweden’s head coach Joel Ronnmark said about Holmstrom after Sweden opened the tournament Saturday with a win.

“He has been playing over here in North America, so he has a lot of experience he can share with the group. I think he’s a skilled player. Fun for that unit to have a goal on the power play as well and for him I as well I think it’s a good start.”

A good start might be putting it lightly with what Holmstrom has shown at the tournament to this point.

The 19-year-old’s recorded four points through two games — both wins for his Swedish squad — and has showed flashes of brilliance, especially in last night in a 4-0 victory over Austria.

Simon Holmstrom with the silky behind the back feed for his second point of the game, fourth point of the tournament thus far. pic.twitter.com/wzayBVAQU1

Holmstrom is no spring chicken when it comes to performing on the world’s stage.. At the U18s last year, he recorded six points in seven games and helped Sweden win a gold medal.

This time around though was expected to be an even more crucial tournament for Holmstrom and his progression.

Because of the COVID-19 pandemic, his season with the Bridgeport Sound Tigers in 2019-20 — his first year playing over in North America — had been cut short to only 46 games. It wasn’t until October when he got back on the ice again after the Islanders had loaned him to HC Vita Hasten in Sweden. There he only got to play in 11 games before the Islanders called him back and he was selected to represent Sweden.

Holmstrom and Sweden are a threat to repeat for the gold and with how he’s performed until now it wouldn’t come as surprise if they were in the final game. They sit atop Group B with the hardest part of their schedule now coming with Russia and the United States.

Those should be some fun affairs and another chance for Holmstrom to shine against some stiffer competition.

Everything with the Islanders’ remaining days of the offseason seems to held up by the pending Mathew Barzal contract negotiations.

The Athletic’s Pierre LeBrun wrote yesterday the Isles were keeping close tabs on Mike Hoffman before St. Louis signed him to a PTO — and soon to be $4 million contract once LTIR kicks in — on Sunday. You could also throw Andreas Athanasiou’s name in there too as another possible option who the Isles might have targeted if Barzal had been locked up already. He signed with Los Angeles yesterday afternoon on a one-year deal.

With Derick Brassard off to Arizona, the time has arrived to “let the kids play.” Brass’s third line spot will now be one of the bigger battles and storylines when the Isles begin camp on Sunday.

The Islanders seem to be finding themselves as one of the favorites in the East. In The Buffalo News’ evaluation of the newly formed East Division, they wrote:

”Why does no one in this division talk about the Islanders? It seems like everyone forgot the Islanders were in the conference finals against Tampa Bay in the bubble.

I was astounded that their odds of winning the division, according to some of these gambling websites, are so low. They have Mathew Barzal and they didn’t really lose much this offseason, aside from goalie Thomas Greiss. The blue line is still solid. They have the best coach in the league in Trotz. … It wouldn’t shock me at all if they won this division.

And there’s going to be some emotion there. This is the last year for the Nassau Coliseum for real this time and you’re looking at a brand-new arena coming and that’s going to completely transform that franchise even more.” 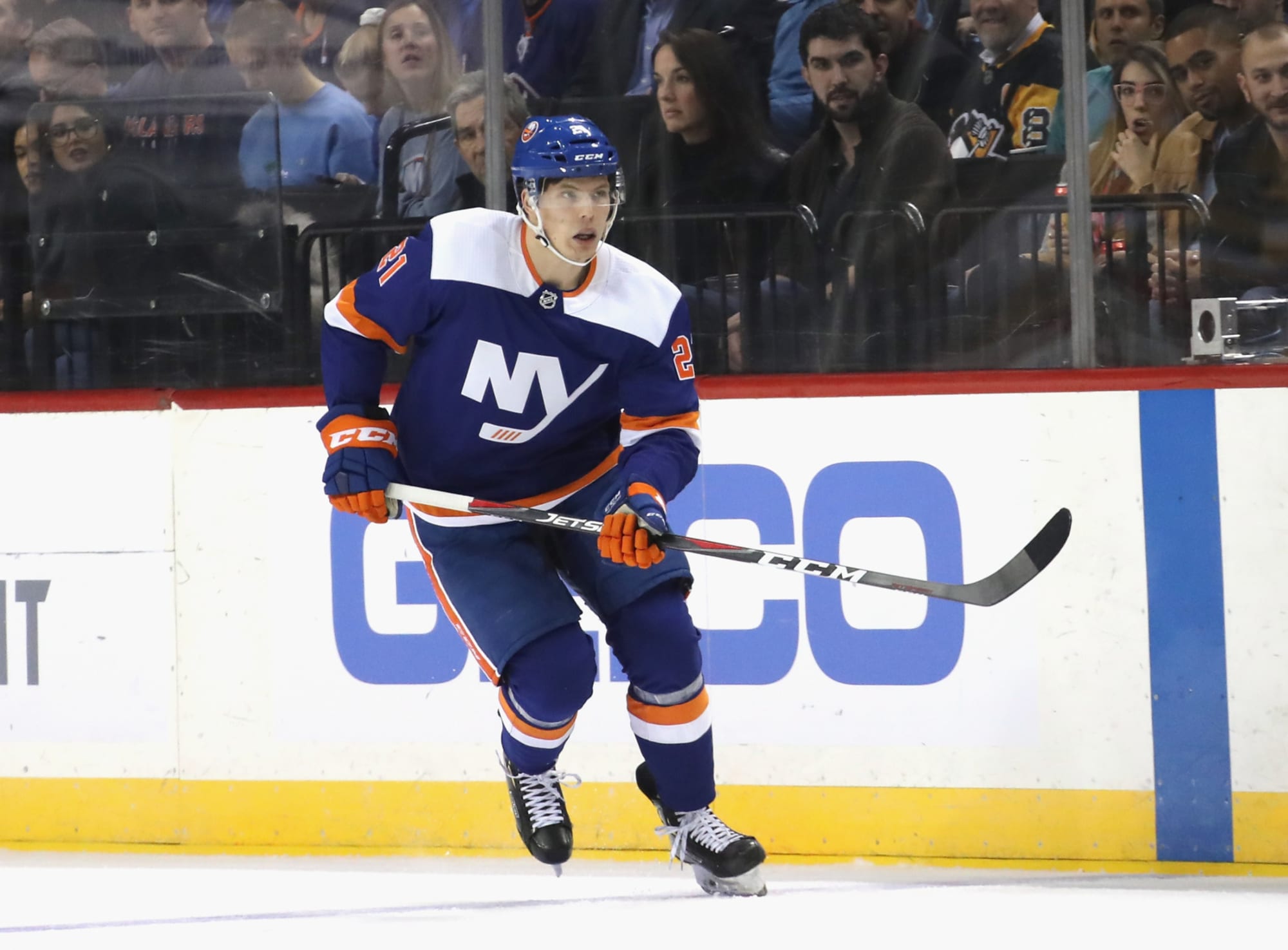 While the start date for the upcoming NHL season remains in limbo, several Islanders are still preparing whenever they may receive the call for when things may begin.

Over the weekend, defenseman Noah Dobson was seen on Instagram working out in the weight room as he prepares for his second season as a pro. It was also a nice reminder that the season will hopefully get here soon and that Dobson himself will be one of the key players for the Isles moving forward.

Noah Dobson putting in the work getting ready for this season #Isles pic.twitter.com/TiyKImhn4o

Dobson was on the ice for the last time the Isles played, as it was his only appearance in the postseason.

The 20-year-old, who appeared in 33 games last season, is expected to be in the play for one of the team’s top-four spots on the blue line. He is expected to replace the services of Devon Toews. Toews was traded last month to the Colorado Avalanche in exchange for two future second-round picks.

Dobson isn’t the only one who has been working toward the proposed January 1st start date.

Simon Holmstrom, who was playing back in his home country on loan from the organization, is heading to Long Island to get ready for camp with the big club. Holmstrom skated in 11 games for Vita Hasten, posting a goal and an assist. And as The Athletic’s Arthur Staple noted this morning, there’s a chance the Isles send their 2019-first round pick to Edmonton where he will join Sweden for the upcoming World Juniors tournament.

Then there’s Otto Koivula. Just like Dobson, Koivula spent the entire postseason with the Isles despite not seeing any game action in either bubble.

The 22-year-old spent some time with the big club last year but has been getting tons of ice time suiting up for IFK in the Finnish Elite League — Liiga — after the Isles loaned him there a month ago.

With IFK, he’s tallied 11 points and his game seems to be rounding into form.

“There’s a big difference to be playing 15-20 games in a league than just training on your own and skating with the guys on Long Island,” Koivula told The Athletic. “That’s good, too, but it’s being in game shape that I think will help me when camp starts.”

Koivula is going to need his best if he’s going to want to crack the Isles lineup. It could be an uphill battle for him with the team basically set down the middle and some other veterans and depth guys ahead of him on the totem pole. On the flip side, it’s good to see him looking to be ready right out of the gates with the hopes of impressing Barry Trotz and his coaching staff.

January 1st continues to be the target date for the NHL and NHLPA to begin the season, but nothing has been decided on yet. That hasn’t stopped several Islander players from preparing as if this were a normal season.

Which is good even with all the uncertainty ahead.

I can guarantee you, that you haven’t heard his name since he was drafted two years ago in the second round. There was a lot of hype for Iskhakov, people compared him to Mika Zibanejad. Ishkakov absolutely destroyed the Slovakia U18 league with 104 points in 2017. After two mediocre seasons at the University of Connecticut, Iskhakov made his way to the TPS. In 9 games, he has 5 points, but he most recently got healthy scratched. Iskhakov may never reach his full potential.

Otto Koivula is an NHL hopeful. In and out of the Islanders’ roster, Koivula needs to make his mark overseas. Koivula was put on loan to the Liiga in Finland and has been a solid player for the HIFK. Koivula recorded 3 points in 5 games and continues to impress in the offensive end. If he ever wants a permanent spot in the NHL, Koivula must improve the defensive side of his game.

It’s finally time, it’s Oliver Wahlstrom time. In Sweden, Wahlstrom has proved to be one of the top players for AIK. With 4 points in 6 games and a couple of spectacular goals, Wahlstrom is ready to come back over. Islander fans have been waiting for Wahlstrom for what seems like decades. He recently took a hard fall into the boards that have kept him sidelined for a couple of games, but he will be fine. Wahlstrom is ready.

Simon Holmstrom is so unbelievably streaky. Sometimes he’s on his games, and other games he literally just skates around. In 6 games with HC Vita Hasten, Holmstrom recorded 2 points. Holmstrom is not a goal scorer by any means; I look at him as a Zach-Aston Reese type player. Holmstrom is not ready for the NHL now, but that doesn’t mean he won’t be ready next year. 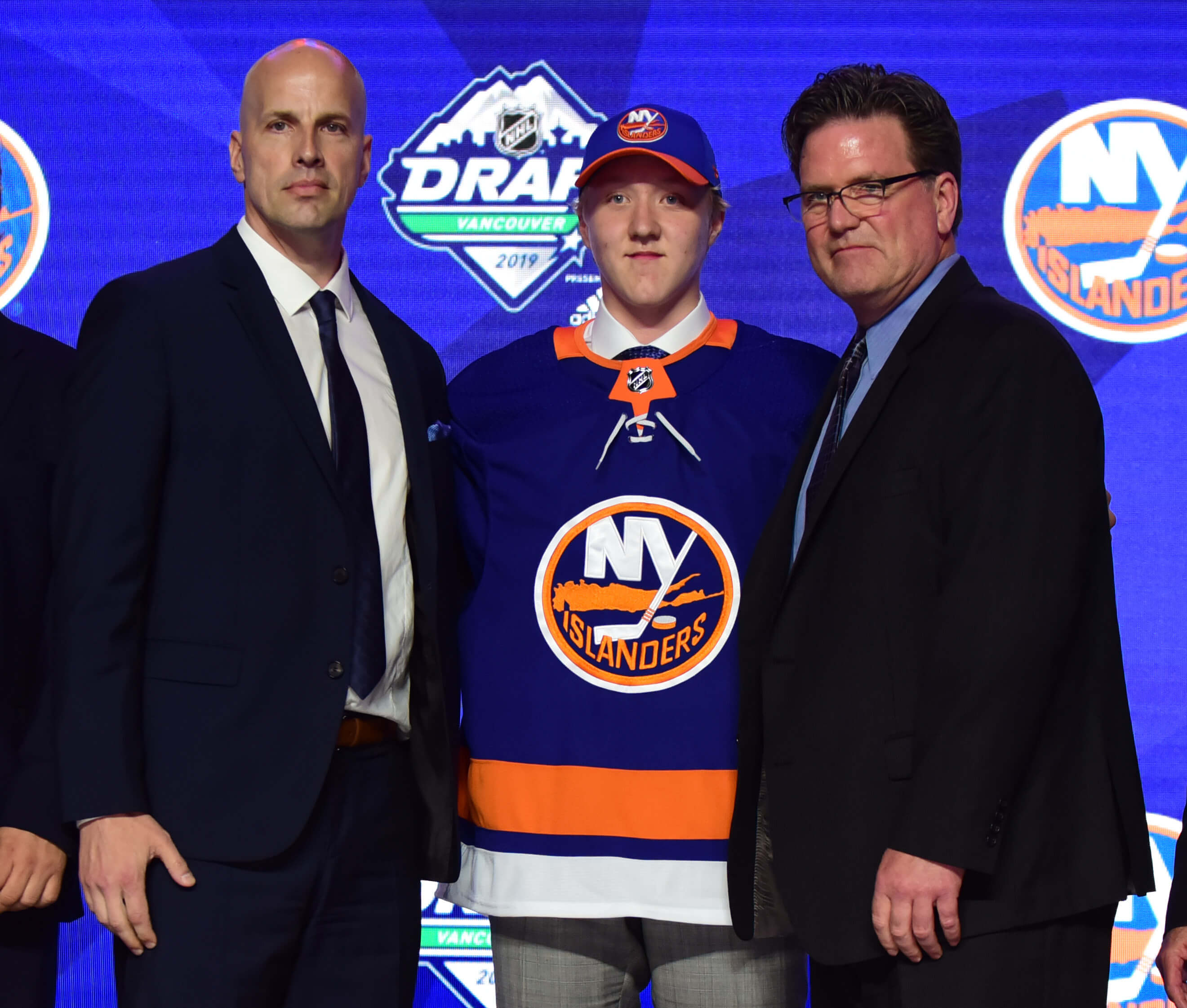 The New York Islanders selected forward, Simon Holmstrom, with the 23rd pick in the 2019 NHL Entry Draft. It was a controversial pick, as most thought he’d fall to the second round. But, he was injured for most of 2018 with hip surgery, a broken thumb, and a concussion. Holmstrom recorded decent stats in the SuperElit Hockey league. Most recently, Holmstrom scored seven goals and had 13 assists in 21 games for HV71 in 2018. Holmstrom would play for the Bridgeport Sound Tigers this year and record eight goals and seven assists in 46 games. As of today, Holmstrom has been put on loan to Vita Hasten in the Swedish league.

Simon Holmstrom was by far the youngest player on the Sound Tigers at just 18 years of age. Due to COVID-19, the AHL season wasn’t supposed to start until December 4th. Loaning off Holmstrom to Sweden, whose season starts September 11th, gives Holmstrom more of a chance to develop quicker. Head coach Barry Trotz calls Holmstrom “a really intelligent kid.” Barry Trotz also gave Holmstrom an extended look during training camp earlier this year. And AHL head coach Brent Thompson talks about how excited he is to coach Holmstrom in the future. Holmstrom is on loan for now, but the Islanders can choose to recall him soon.

Simon Holmstrom has a long way to go before he cracks the NHL roster, but he’s on the right track right now. Not too many players come in as a late first-round draft pick and play immediately. There’s a learning curve for all NHL players, and Holmstrom is experiencing this curve right now. The AHL is not some league for only developers; the AHL is a league full of veterans, young, good prospects, and up-and-down NHL players. Holmstrom will have to find his footing in the Swedish league on more time before coming back over.

The future is very bright for the first-round pick. The Islanders have the best coach in Hockey, and really good assistant coaches like Lane Lambert. If Holmstrom listens to his coaches and follows the system, he will be a mainstay in the NHL for a long time. I predict 18 goals and 12 assists for Holmstrom in the Swedish league. Although he’s not a tremendous goal scorer, he makes a ton of smart decisions in the neutral zone. Holmstrom won’t score 30 goals, but he’ll create good offense for the rest of his line. Heads up Islanders fans, the winger you’ve all been clamoring for may be coming soon.