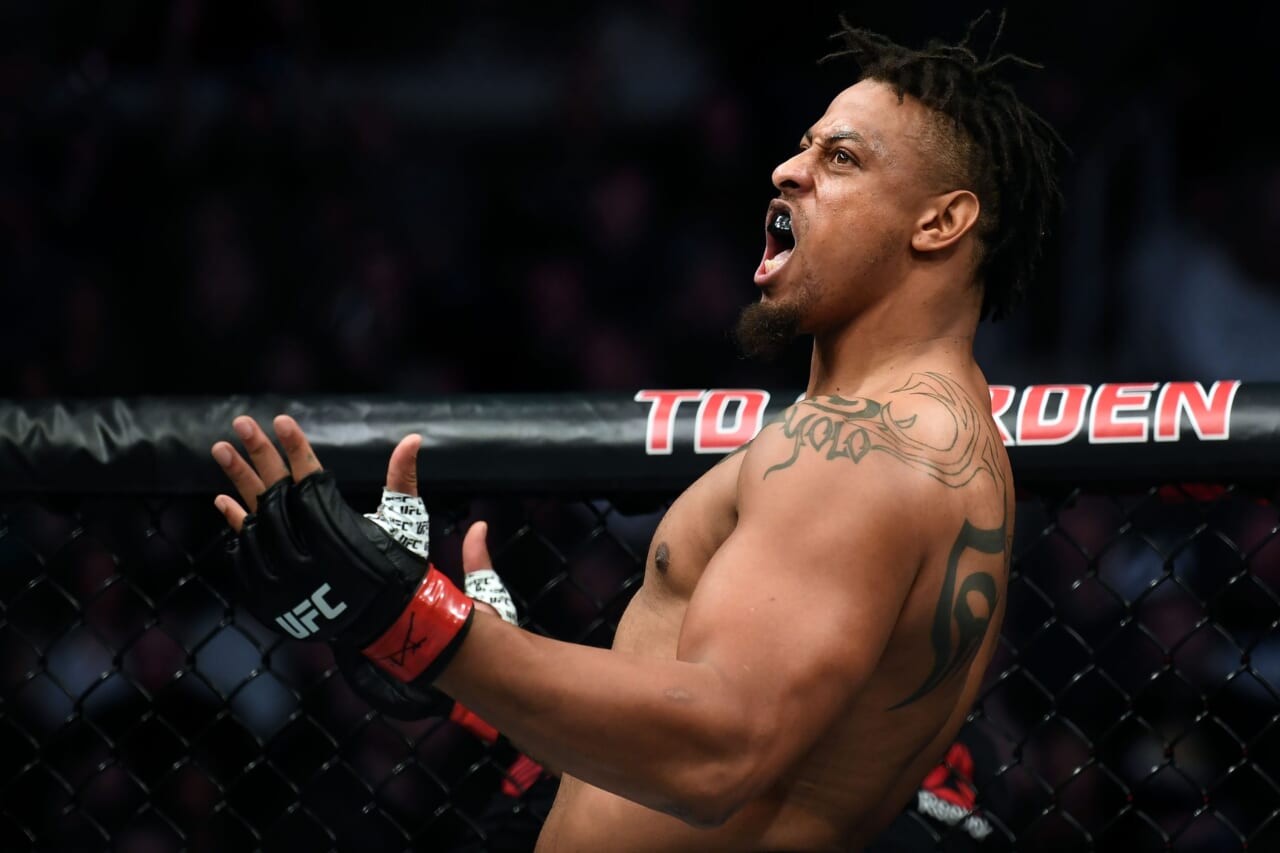 Today we learned that next week’s UFC 270 card is having some last minute changes. Notably, a main card heavyweight matchup between Greg Hardy (7-4, 1 NC) and Aleksei Oleinik (59-16) is off. Ariel Helwani reported the news this afternoon that Oleinik has pulled out of the fight.

With that, the UFC has shifted and found a new opponent for Hardy. Hardy will now take on Sergey Spivak (13-3) on the main card. Spivak is actually a tougher fight for Hardy than the veteran Oleinik. Spivak will be looking to bounce back when we see him next Saturday night.

The last time we saw Spivak was when he was taking on surging heavyweight contender Tom Aspinall. Aspinall knocked Spivak out in the first round. That fight was back in September. The loss had snapped a three-fight win streak for Spivak.

During that winning streak, Spivak used his superior grappling to pick up some wins and even picked up a win over Aleksei Oleinik. He figures to be a tough test for Greg Hardy at UFC 270.

When Greg Hardy makes the walk at UFC 270, it could be for the final time as a UFC fighter. It has come out this week that next weekend will be the final fight of Greg Hardy’s contract. At this time, there’s no word on if the two sides planning on extending the deal or if Hardy plans on resigning.

Based on some recent comments from Hardy, it almost seems like he’s wanting to test the market. He will head into this final contest looking to snap a two-fight losing streak. The last time we saw Hardy was back at UFC 264 when he was knocked out in the first round by Tai Tuivasa.

Hardy won his first three professional MMA fights by vicious first round knockout. Given his background, he made his UFC debut in a co-main event slot when the promotion first debuted on ESPN+. Unfortunately for Hardy, he lost that first fight by disqualification.

Since that DQ loss, he’s gone 4-3, 1 NC in eight UFC fights. He’s looked like a very serviceable heavyweight, but he never really got going towards the top of the division. He needs a big performance next Saturday night to prove what he’s worth as his contract expires. 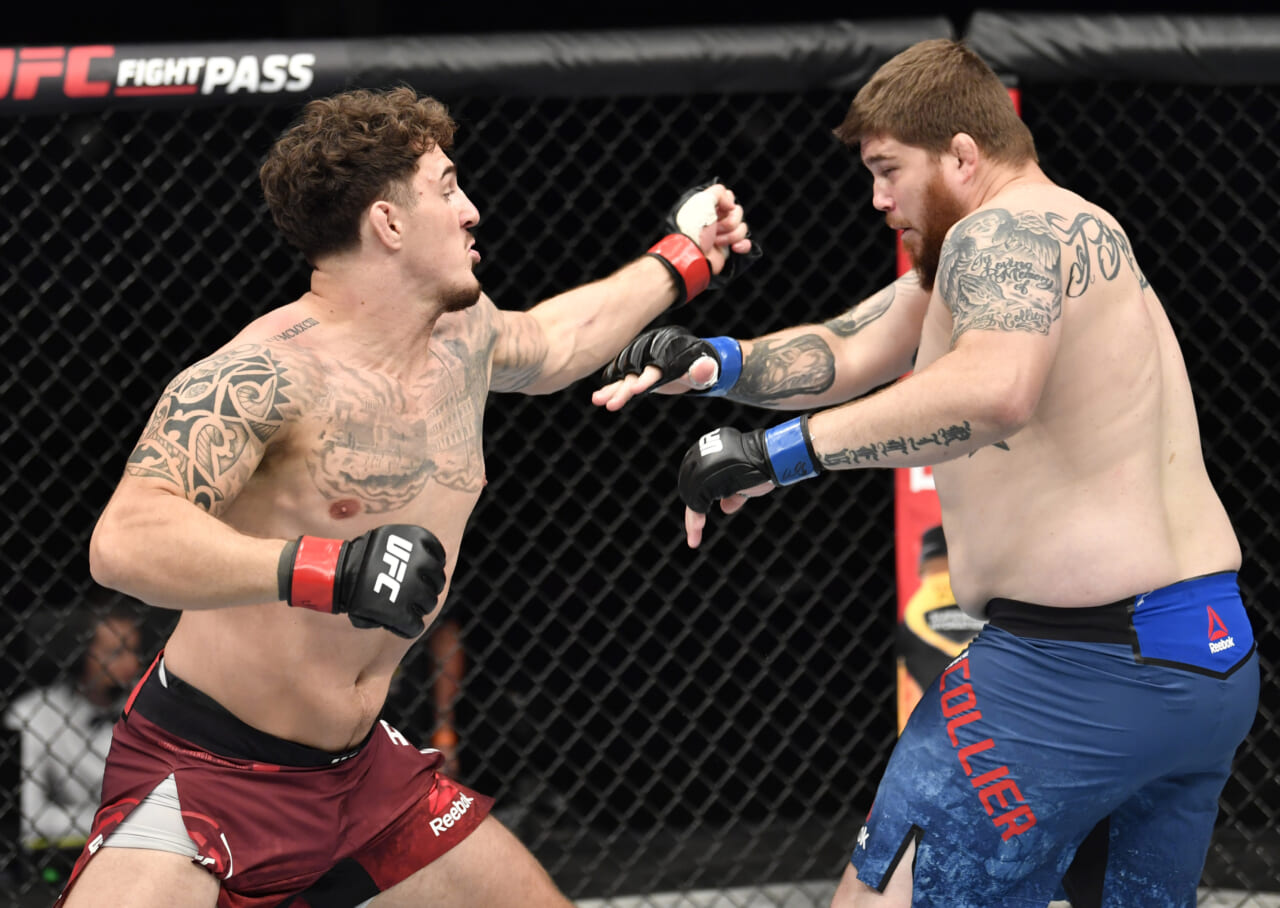 Last weekend at UFC Vegas 36, Tom Aspinall (11-2) took on Sergey Spivak (13-3) in the co-main event of the evening. Aspinall has been perfect since joining the UFC last year having started 3-0.

Back in February, he got a huge fight with former champion Andrei Arlovski. Aspinall passed that test with flying colors submitting Arlovski in the second round of their fight. Spivak was set to be another challenge for Aspinall.

Spivak was another top fifteen UFC heavyweight. It was the first time that Aspinall was taking on another ranked heavyweight and once again, the British heavyweight passed the test with flying colors.

While Spivak was set to challenge Aspinall, Aspinall ran right through him. Halfway through the opening round, Aspinall dropped Spivak and followed up with some brutal shots. Ultimately the referee called a stop to the action and Aspinall picked up his fourth straight UFC victory.

Tom Aspinall looks like he’s the full package. He has tremendous skills on the ground and his boxing is incredibly crisp. One of the things that makes him so dangerous on his feet is his work with boxing heavyweight champion Tyson Fury.

After UFC Vegas 36, many were wondering if Aspinall would be vaulted towards the top of the division. However, Aspinall wants to take things slow and admitted that he believes he’s not quite ready for the top guys at heavyweight.

After his win at UFC Vegas 36, Aspinall told the media, “I need a lot more experience before I fight those guys. Iâ€™m not ready for those guys yet. This doesnâ€™t mean Iâ€™m not confident. This means Iâ€™m very confident in my ability, but Iâ€™m also confident that I need to be ready to beat these guys.”

Aspinall also pointed out the fact that he’s only 28 years old. The UFC has a star in the making with Aspinall and I think they should follow his ideal plan. A slow build would be the best thing for his career.

Aspinall actually mentioned a perfect opponent for him next. That opponent would be Blagoy Ivanov (18-4). Ivanov is a fellow top fifteen heavyweight who’s just known for being an insanely tough fight. This would be a great fight to test Aspinall.