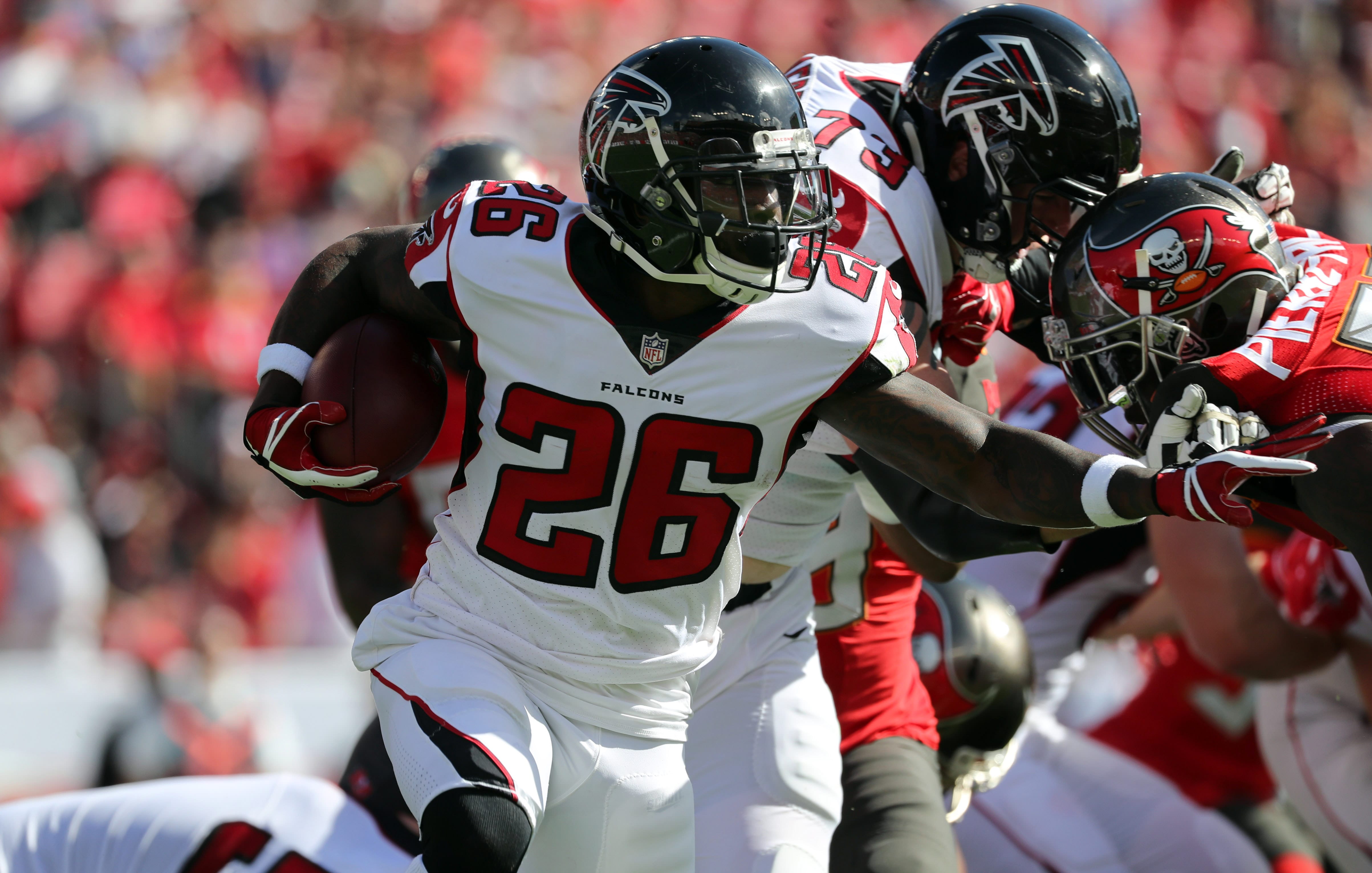 The Jets have added another playmaker on the offensive side of the football. Joining La’Mical Perine, Ty Johnson, and Josh Adams in the backfield next season will be Tevin Coleman. Coleman joins the team on a one-year deal worth $2 million dollars. Coleman played for the Atlanta Falcons for four seasons before inking a deal with San Francisco just two years ago. Now, Coleman, after two seasons with the 49ers, reunites with Mike LaFleur in the Big Apple.

How Does Coleman Fit?

Tevin Coleman is going on 28 years old and joins a group of young backs. Coleman has started games in the past, most notably 14 in 2018. A season where Coleman also had over 1,000 yards from scrimmage and 9 touchdowns. Coleman has had productive seasons in the past, and he joins an offense he has played and thrived in, in the past.

Coleman will be both a good veteran presence in a locker room of young backs by showing them how the system works, but he will also be a weapon on the field. Last season, in the Shanahan offense, Coleman was unable to get going with only 28 carries for 53 yards, totaling up only 1.9 yards per attempt.

Despite those career worsts last season, in his first season with San Fran, Coleman had 137 carries for 544 yards and 6 touchdowns. He also added 180 yards and 3 touchdowns, receiving on 21 receptions. That level of production is something the Jets hope he can get back to in this upcoming season. Ultimately, Coleman will not be a bell-cow back, but in a running back room that is relatively inexperienced, Coleman provides stability.

Not only that, but if the Jets do opt to draft another back into the fold as a bell cow, Coleman can be a great complementary back. Overall the addition is not going to be as headline-grabbing as a trade for a premier back or an attempt to sign someone along the lines of a Leonard Fournette or James Conner, but the move is a low-risk high reward add for Douglas as he looks to fill out the offense with more pieces after a disastrous 2020. 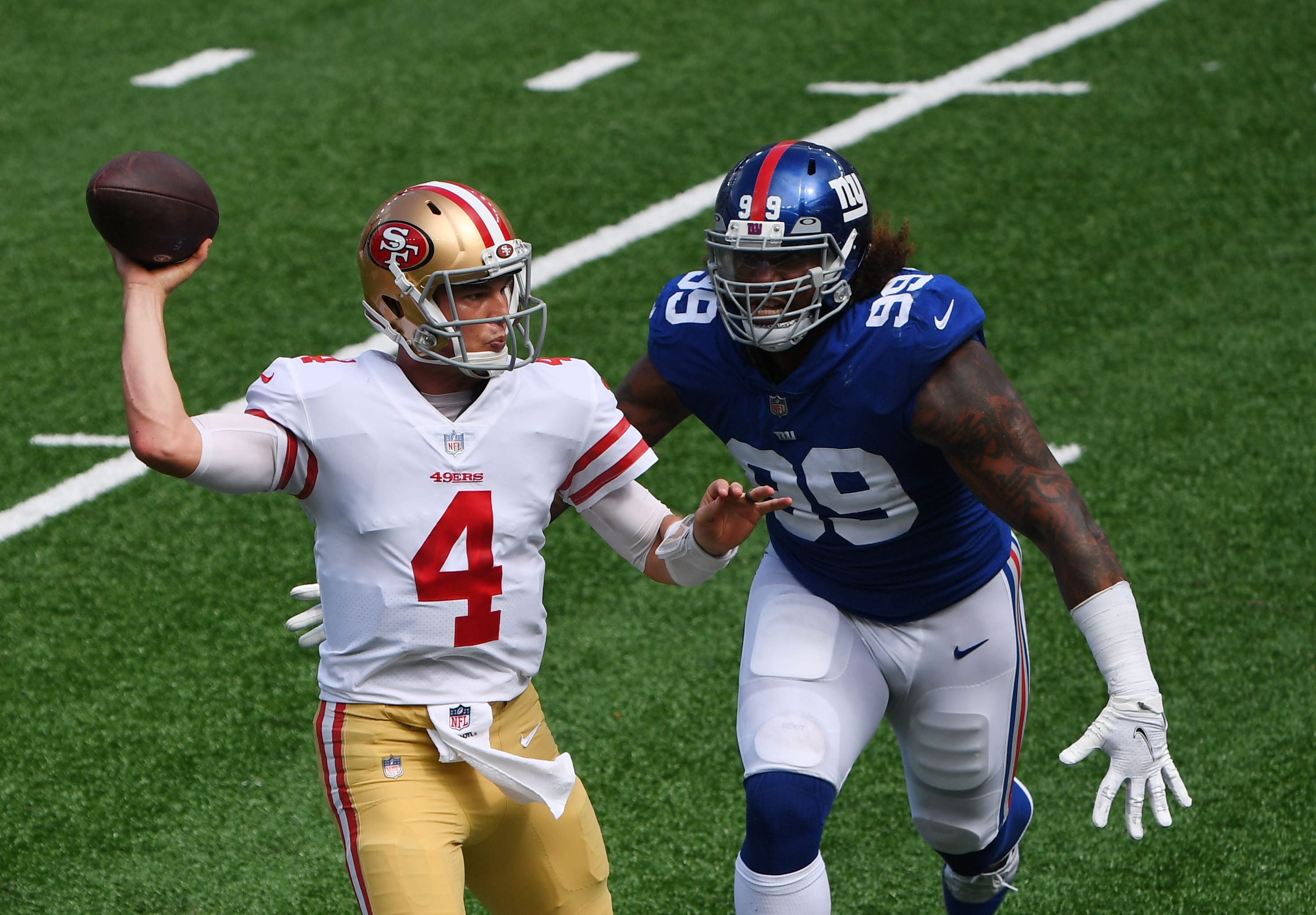 The New York Giants suffered an embarrassing loss today to the San Fransisco 49ers. The 49ers, starting backup and reserve players all over, blew the Giants out 36-9 as New York’s offense never ran a single play in the red zone.

Head coach Joe Judge met with the media forty-five minutes after the game concluded. Presumably, Judge was chewing into his players after a pathetic Week Three performance that saw the team drop to 0-3, once again.

The Giants have yet to stumble into a victory in 2020. New York’s 27-point defeat has left fans disappointed and uncertain about the team’s future. For Joe Judge, it is all about “day-to-day improvement.” Judge recognizes a “tough opponent” is once again on the Giants’ schedule entering Week Four, and the Giants need to be better than they were this week.

We’re not looking for excuses, not pointing fingers, not looking for shortcuts. We’re going to do everything we can to make sure we will put a product on the field people of this area can be proud of. We’ll be working our butt off to improve the product going forward. – Joe Judge via Matt Lombardo

Judge and the Giants are making no excuses. He is holding himself and his team accountable and hoping to improve for the future. Judge plans to “go out there day by day and piece by piece to put this together.”

The Giants’ defense struggled to get off the field on third down all game. When asked about this Leonard Williams did not point any fingers, but noted that he needs to get to the quarterback faster and the team as a whole needs to do better.

Per Jordan Raanan, Leonard Williams stated that he thinks the Giants are “right there” and that they need to fix a few “small” errors/mistakes in order to turn things around.

Giants linebacker Blake Martinez also mentioned the small little things in his postgame press conference. He suspects they will “show up on the tape,” as does Joe Judge. However, many fans will likely agree that the tape is not needed to identify many of these mistakes.

In the first quarter, the Giants made a crucial mistake, turning the ball over on a pitch play to Evan Engram. Jones took the blame for this, stating that it was “just a poor pitch.” Jones and the Giants worked on that play all week in practice.

He also took accountability for his second turnover in the game. Jones conceded that his interception to Evan Engram in the second quarter was a “poor decision.”

Jones and the Giants are “disappointed” but their confidence has not wavered. The Giants must “take [the loss] and learn from it.” Moving forward, the Giants will continue to work hard and prepare for Week Four. Jones said “nothing” will change that. The Giants will try to “not let this situation define” them. 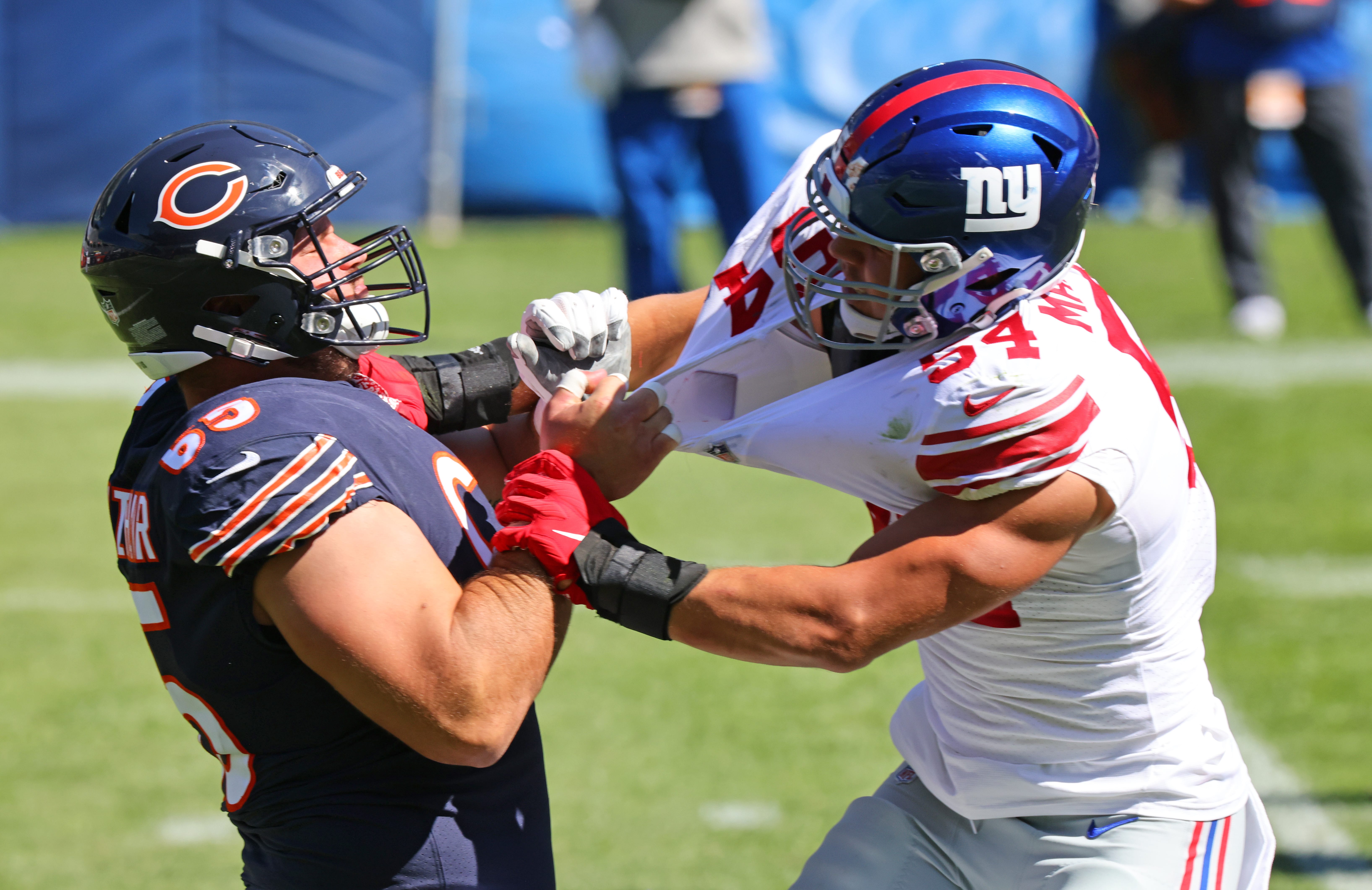 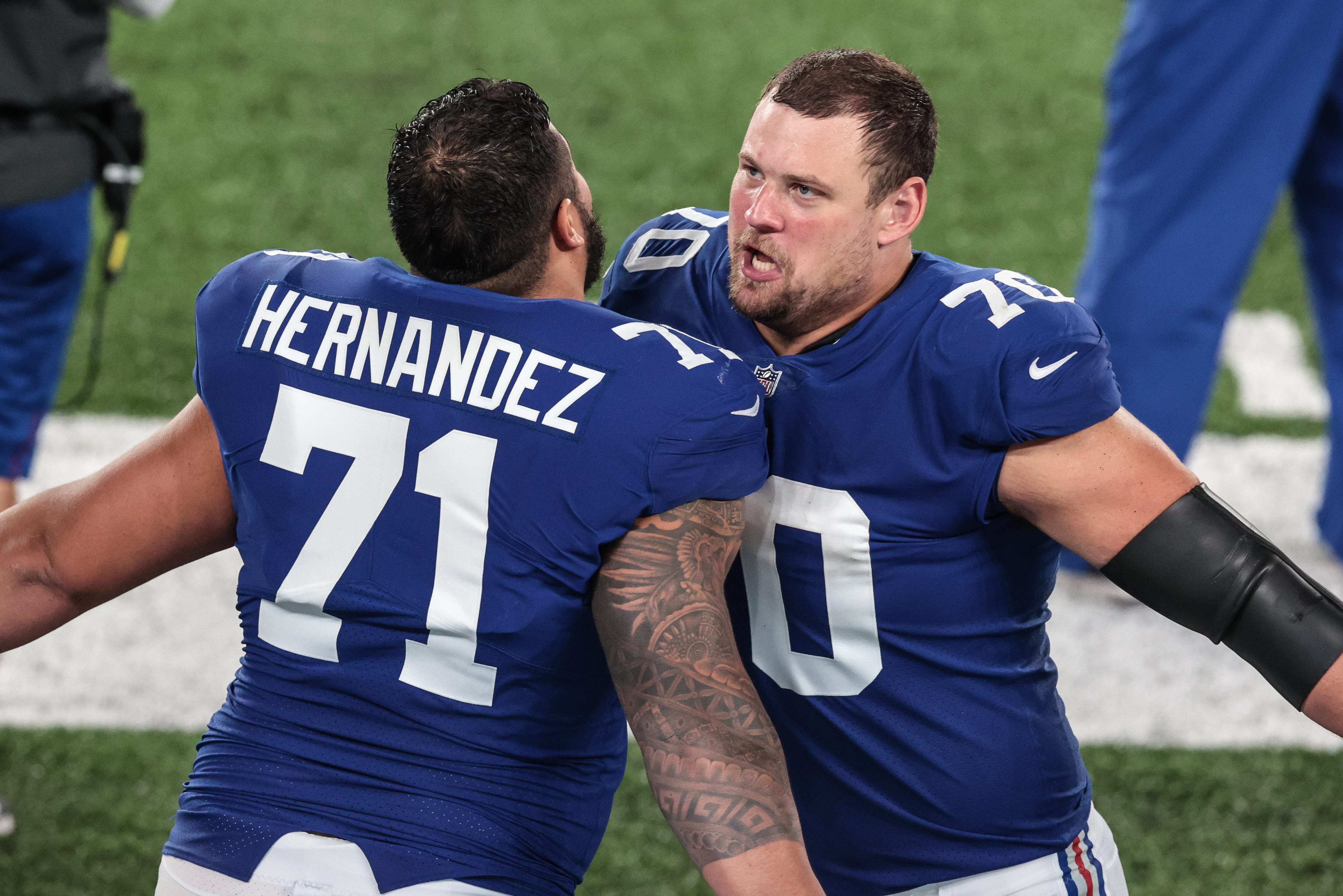 The New York Giants have had issues across their offensive line for years now. Entering the 2020 NFL season, the expectations were set higher for the Giants’ front line. New York invested heavily in their offensive line and upgraded the positional unit’s coach. But so far, these improvements have not shown up on the field.

The Giants have gone up against two of the NFL’s best front-sevens in the first two weeks of the season. New York’s new offensive line has been given two extremely tough tasks to kickoff 2020. But the Giants’ “new & improved” line has not handled these tasks well at all.

The New York Giants’ offensive line has surrendered an insane amount of pressure in 2020. Through two games, the Giants have allowed 56 pressures, the second-highest total in the NFL (according to Pro Football Focus). According to Football Outsiders, New York has also let up 7 sacks in two games, the second-highest total in the NFL.

Though Andrew Thomas has held his own against two of the best defenses in the NFL, he has still struggled through the first two weeks of the season. He is currently the lowest-graded of the top four offensive tackles from the first round of the 2020 NFL Draft class.

But the rest of the offensive line has struggled along with Thomas. If the Giants’ offensive line is going to make a turnaround, Week Three is the time to do it.

Originally, the Giants were scheduled to go against another dominant defense in Week Three of the 2020 NFL season. This week, the Giants will host the San Fransisco 49ers at MetLife Stadium. Andrew Thomas and the Giants’ line was projected to face off against the likes of Nick Bosa, Solomon Thomas, and Dee Ford. In reality, the Giants will face none of these talented defenders.

Solomon Thomas is another talented player on the 49ers’ defensive line. He also suffered a season-ending injury in Week Two. Dee Ford is also injured and out for Week Two, but fortunately, he will not be sidelined for the entire season.

The Giants will not have to face any of the 49ers’ top three defensive linemen in Week Two. San Fransisco signed veteran defensive end Ezekiel Ansah to help fill one of these holes. But overall, the Giants’ offensive line is fortunately not going to be completely overmatched like they have been the last two weeks.