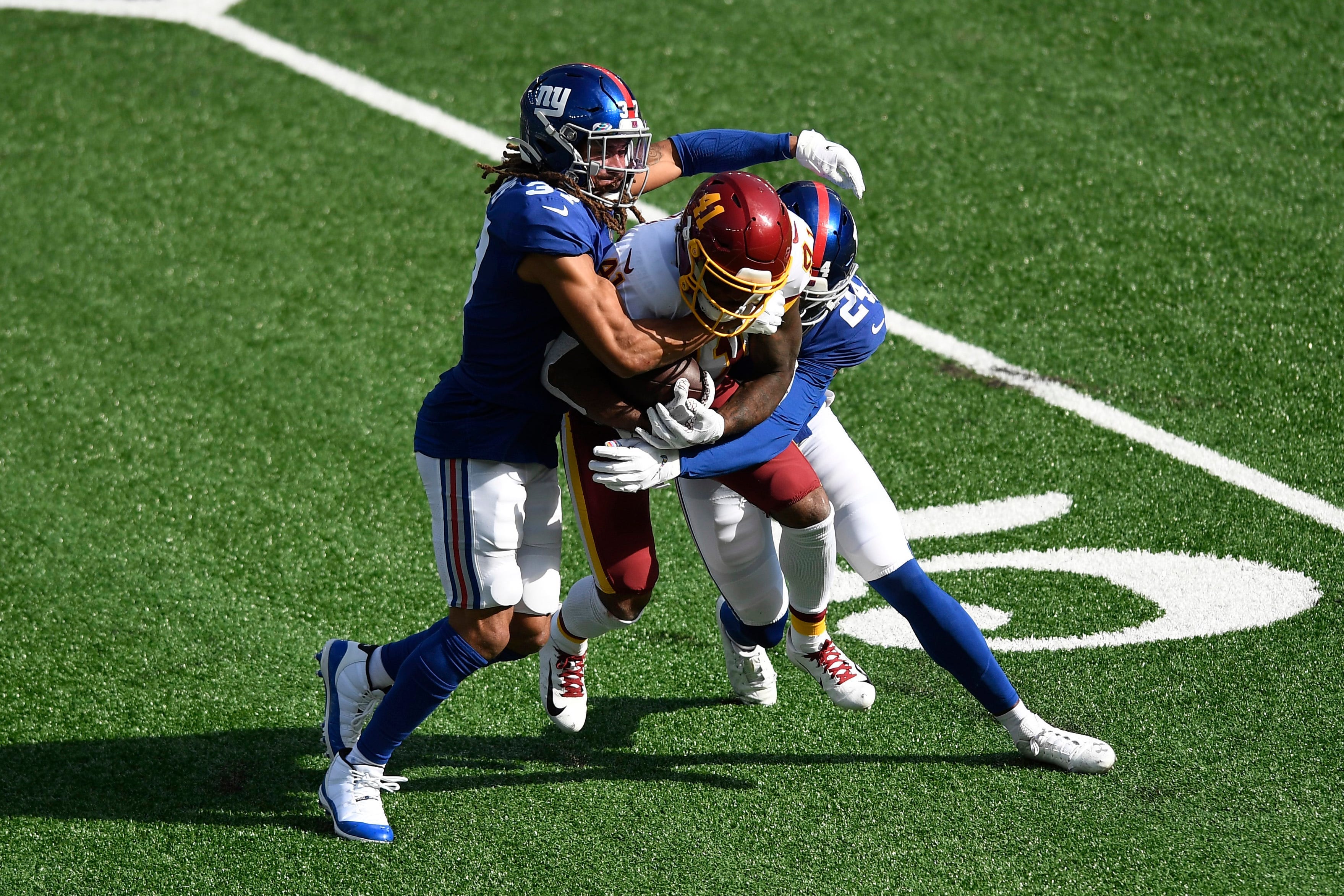 The New York Giants have improved in the secondary since last season, and because of that, they’ve moved on from one cornerback that they don’t see the need for anymore. The player in this case is Ryan Lewis, who joined the roster in 2020 as a member of the practice squad. The Giants would later bring him up to the active roster for the game against Chicago before sending him back down.

Lewis would make it back to the active roster during the same month but ultimately his season was interrupted by injury as he was placed on the IR list in November. Now, the team is making the decision to make him one of their offseason waivers after adding another cornerback to the current group in Adoree’ Jackson.

Lewis, a former college player with the University of Pittsburgh, came into the league as an undrafted free agent and played for a number of teams before making it to the Giants. He had stints with the Cardinals, Patriots, Colts, Eagles, Dolphins, and Washington.

He’d end up playing five games for the Giants and racking up 13 tackles and one pass breakup during his time last year. Not the worst numbers in the world for someone that started off in the practice squad.

Ultimately, though, the Giants don’t see Lewis as a player worth taking into the next season after the team has added others such as Adoree’ Jackson, Joshua Kalu, and expects to get Sam Beal back. One thing’s for certain, and that’s the secondary looking a little different going into 2021. 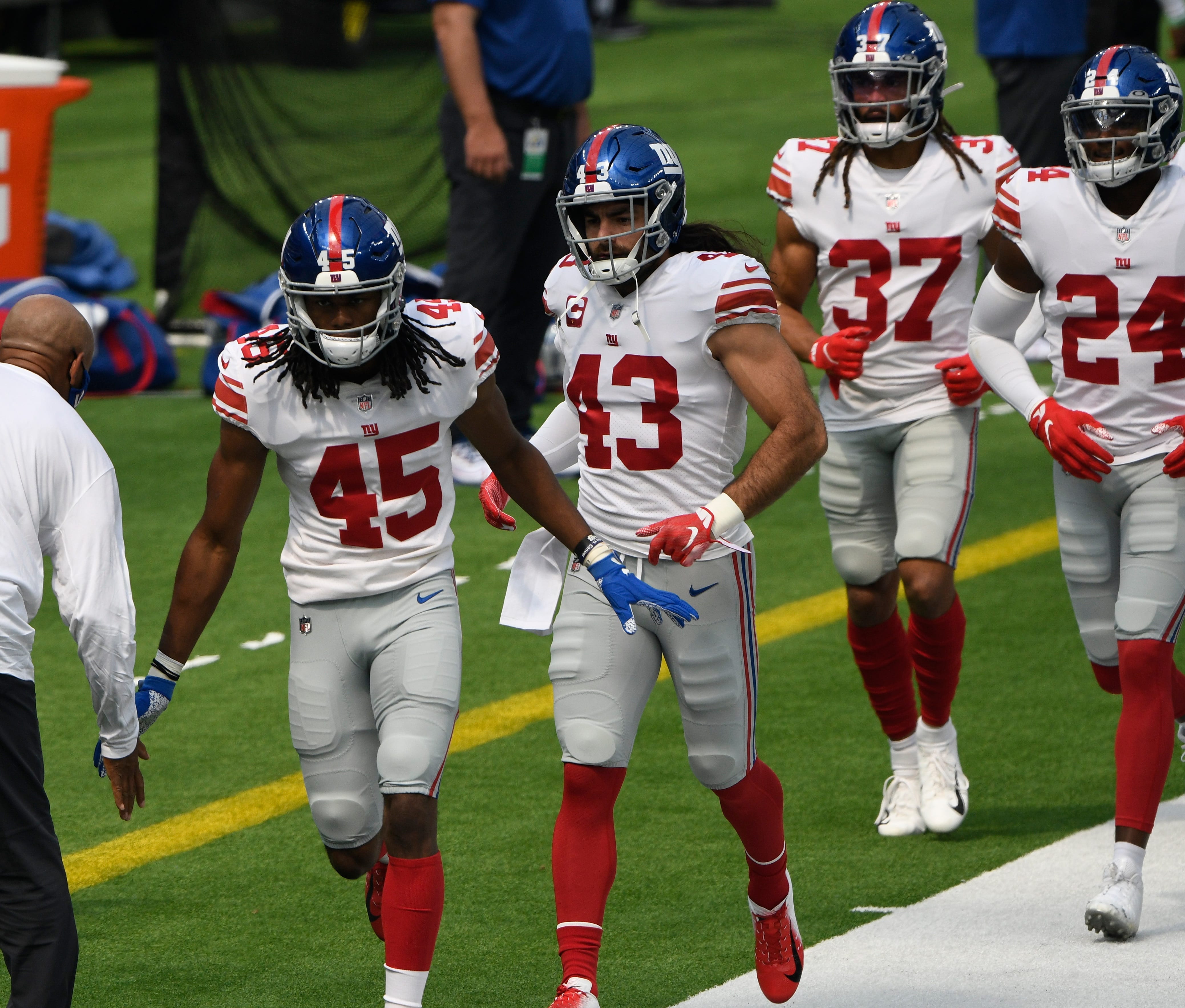 The New York Giants won their Week 9 matchup against Washington behind a dominating, five turnover performance from their defense. New York forced three interceptions as the secondary managed to contain Washington’s passing attack.

Despite this, there was still a familiar struggle within the Giants’ pass defense. The secondary cornerback position, this week manned by Isaac Yiadom, has been a consistent area of weakness for the Giants all season. The Giants have rotated the likes of Corey Ballentine, Isaac Yiadom, and Ryan Lewis in that position.

This week, Terry McLaurin was the lone bright spot on the Football Team’s offense as he totaled 7 receptions for 115 yards and 1 touchdown. James Bradberry managed McLaurin and any other receivers he lined up against, but Isaac Yiadom struggled severely.

Cornerback Isaac Yiadom allowed a perfect 158.3 passer rating against Washington on Sunday, according to Pro Football Focus. James Bradberry, on the other hand, was only targeted in coverage one time. Washington made a conscious effort to avoid Bradberry and attack the Giants’ second cornerback position.

Ryan Lewis seemed to be the answer to the Giants’ cornerback problems. But, after he was placed on injured reserve, Isaac Yiadom was put back into the starting lineup. After this disappointing performance, it will be interesting to see who the Giants roll out there in Week 10 versus Philadelphia.

Additionally, Xavier McKinney could return to the Giants’ defense sometime this month. His addition to the lineup could move Logan Ryan over to cornerback two, or even Julian Love. New York, fortunately, has solid depth at the safety positions, but the cornerback position will need to improve.

One thing that makes New York Giants’ defensive coordinator Patrick Graham stellar is that he doesn’t stall with his adjustments. Early on in the 2020 campaign, the Giants had a significant issue at the No. 2 corner position, but Graham didn’t waste any time rotating players to find a solution.

Starting with Corey Ballentine, who allowed an 83.3% completion rate, 65 yards, and a touchdown on just 22% of the defensive stops leading up to the present day, Graham quickly moved on to Isaac Yiadom, former third-round pick of the Denver Broncos. General manager Dave Gettleman spent a conditional seventh-rounder to acquire Yiadom, but he ultimately proved to be just as bad in coverage as Ballentine.

According to PFF, Yiadom enjoyed a 30.4 coverage grade over four games before being benched. While he was decent in run defense, his inability to hold up in coverage was his primary job, which he failed at miserably.

Since then, the Giants have installed former undrafted free agent Ryan Lewis into their secondary. At 6-foot and 195 pounds, Lewis has experience in Graham’s scheme, having played with him in Miami last season. He played in 293 total snaps and is already at 197 with the Giants this year. His run defense is extremely poor, but his coverage grades have been far better alongside James Bradberry at corner.

Against Washington in week six, he landed a 71.7 grade, holding Terry McLaurin to 74 yards through the air.

Should the New York Giants feel confident at CB2?

Now, I wouldn’t cement Lewis at the CB2 spot, as I would like to see more consistency from him and improvement in run defense. There’s a long way to go before the Giants can feel confident with him as their starter, but he is a short term solution for the time being unless he explodes onto the scene and completely revitalizes the position after the departure of the DeAndre Baker.

Through six weeks, the Giants currently rank 16th in the NFL in passing yards allowed per game with 235.5. However, their run defense has been solid, as they rank eighth in the league. In points per game, they rank 16th, which is about average. It is important to note that the defense is currently rebuilding and performing way above their expectations.

That is a complement to Graham and what he has done with this group in such a short period of time. Hopefully, Lewis can be an integral part of the secondary and grow within his role as the season progresses.

The New York Giants fell 9-17 to the Los Angeles Rams on Sunday afternoon, but the game was much closer than a week three travesty to the San Francisco 49ers. The Giants made back up quarterback Nick Mullens look like the next coming of Joe Montana, and he was subsequently benched against the Philadelphia Eagles this week. It seemed to be an anomaly for a team that has a lot of fight but simply can’t extract wins this year.

New head coach Joe Judge has his team battling until the final moments, and the start of the season was always going to be problematic with multiple new starters on both sides of the ball and a new coaching staff with different schematics.

While the defense has looked fantastic for the most part, one position remains a big question going into a week five matchup against the Dallas Cowboys.

The second cornerback spot, left by DeAndre Baker after his legal proceedings, has been a rotation of multiple options. He left a serious hole in the secondary, and the Giants have been trying to compensate ever since.

In week four, the Giants chose to bench Corey Ballantine entirely. He received zero snaps on defense but played the majority on special teams. Former third-round pick Isaac Yiadom, whom the Giants traded a seventh-round conditional pick for prior to the start of the regular season, earned only 26% of the snaps. Instead, they took a different route, inserting undrafted free agent Ryan Lewis for 74% of the snaps at CB2.

Lewis had a solid outing, and at 26 years old, the Giants will likely be utilizing him more frequently in the near future. Against the Rams, he racked up three combined tackles and didn’t allow a reception. Interestingly, he spent eight games with the Patrick Graham lead Miami defense in 2019, holding his opposition to a 58.3% completion rate and just one touchdown over 36 targets. He was actually quite successful in coverage, and bringing him onto a shallow Giants’ secondary was a good move. His experience in Graham’s scheme is proving to be essential and I expect him to continue growing in the role.

Nonetheless, finding an even serviceable option at CB2 is essential at this point. Ballentine and Yiadom have proven to be liabilities in coverage, and Lewis is already showing positive momentum in an area that has significantly hurt the team in recent weeks.