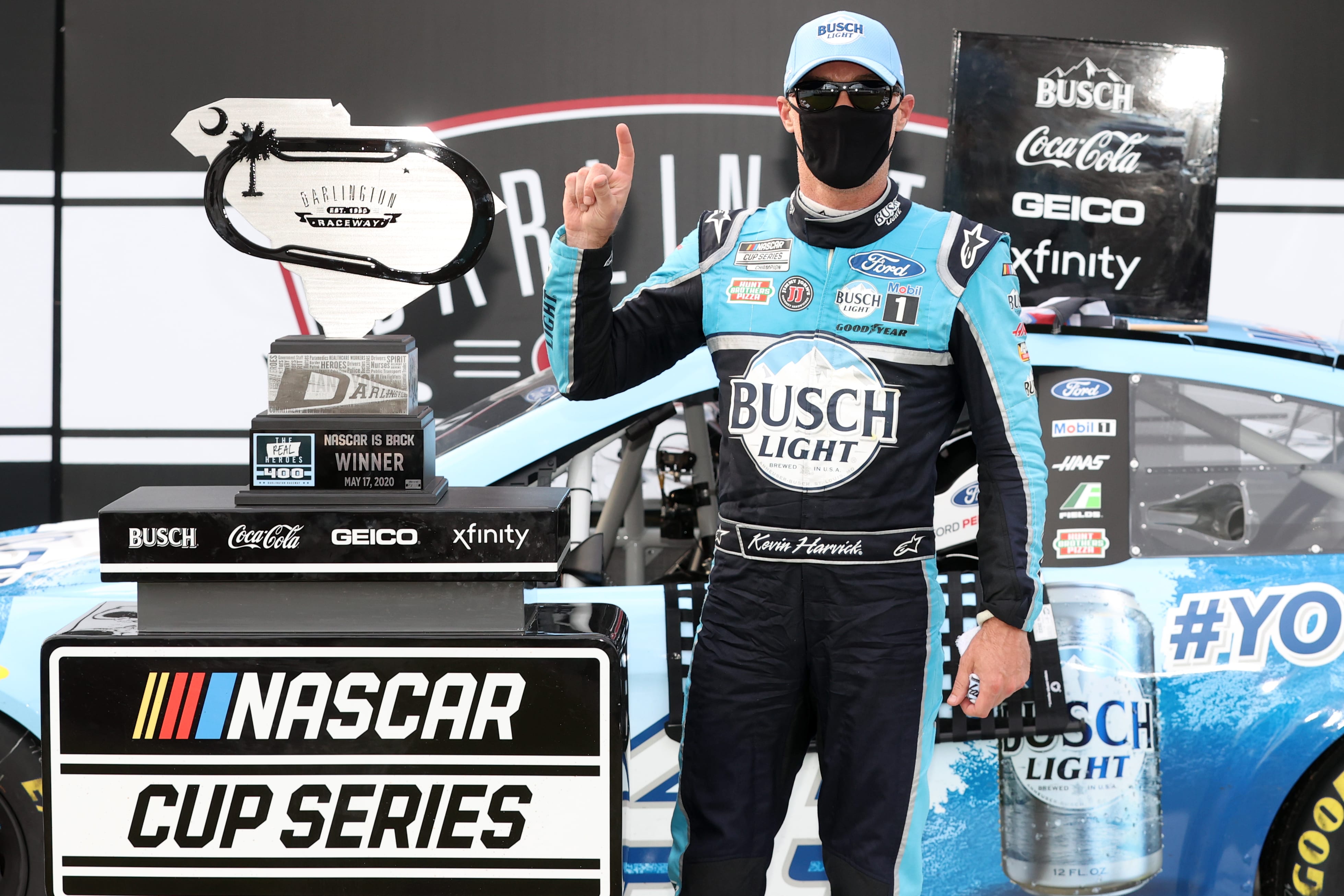 NASCAR returned in style on Sunday, as Kevin Harvick became the 14th driver in Cup Series history to earn 50 wins.

Live, team-oriented sports returned in style on Sunday, as the NASCAR Cup Series circuit staged the Real Heroes 400 at Darlington Raceway in Myrtle Beach, South Carolina. Kevin Harvick was the first victor, leading 159 of 293 laps en route to his first victory of the 2020 season/

Harvick, the driver of the No. 4 Ford for Stewart-Haas Racing, also earned the 50th victory of his career. He join an illustrious list of 13 other drivers to earn that tally on NASCAR’s premier circuit.

“When you look at a win like this today, this is an organizational win because you have to have your car dialed in when you get here in order to win a race like this,” Harvick said in a Zoom video conference call after the race. “Our guys have just done a great job of putting all the pieces together. Today we were able to capitalize on that and win a race.”

The win, despite the historic weight attached to it, came with a sense of hollowness for Harvick, the first winner in the unusual times for NASCAR.

Sunday’s event was, in racing terms, run under caution in the wake of the coronavirus pandemic. The stands were empty and media invitations were kept to a minimum. Practice and qualifying were canceled, so drivers were embarking on an endeavor at a locale known as “The Track Too Tough to Tame” with literally no on-track preparation. Harvick’s victory lane celebration was perhaps best labeled by his posing with the race trophy under the protection of a facemask and no one else around, contrasting the normally raucous, confetti-spewing antics that ensue after a win.

“Usually you get out of the car and the crowd is screaming and yelling, react. Today out of the car it was like, well, I don’t really know what to do here,” Harvick said with a smile. “I got in my car, drove to Victory Lane. There were two photographers there, no team guys. I was able to kind of get my team guys a nice little elbow bump there as I left Victory Lane, tell them great job. Those guys didn’t get a chance to take a picture with their car. Just a lot of sacrifices that go into it.”

“But in the end, in the big picture of things, being able to do what we did today, and that’s race, is what everybody wants to do.”

But the veteran of nearly two Cup Series decades was proud to put on a show at a time the country needed it the most.

“There’s a lot of people that put a lot of effort into this,” he remarked. “I’m glad it went the way that it went. I hope people that watched for the first time liked what they saw. This is a unique racetrack here at Darlington. In the end, it’s just having that opportunity to present yourself to new people. Hopefully, you can make a lot of new fans as you go forward.”

Harvick has been by far the most consistent driver during the interrupted NASCAR season. He is the only driver to appear in the top ten in each of the five races run thus far and leads the points standings over Alex Bowman, whose No. 88 Chevrolet appeared in Sunday’s runner-up slot.

It was Bowman who gave Harvick his biggest challenge of the afternoon. The Hendrick Motorsports star and winner of this spring’s race at Fontana lined up next to Harvick on what became the final restart after a caution for Ryan’s Newman’s spin on lap 254. Harvick’s No. 4 team won the ensuing race off of pit road before its driver held off a furious challenge from Bowman and Kurt Busch. The Busch Light-branded Ford then drove off to Harvick’s first Darlington victory since August 2014.

“I feel like watching it back, I could have been really aggressive and cut the corner into one a little bit and maybe cleared him. I was already pretty aggressive with that,” Bowman said in another Zoom call. “Maybe I could have acted like I was going to clear myself and got him to lift. If he doesn’t lift, we both crash. In three and four I got loose under him. He did a good job of getting on my door, taking some side force away.”

“That’s tough. You’re racing one of the best in the business at one of the most technical, hard racetracks we go to. Just to have the opportunity to race him hard and clean like that was a lot of fun.”

NASCAR will remain at Darlington as they continue a quest to run all 36 races on their docket. The lower-tier Xfinity Series win run on Tuesday night (8:00 p.m. ET, FS1) before the Cup Series returns to action on Wednesday with the Toyota 500 (7:30 p.m. ET, FS1). The 500-kilometer race will run for 228 laps around the 1.5-mile track.