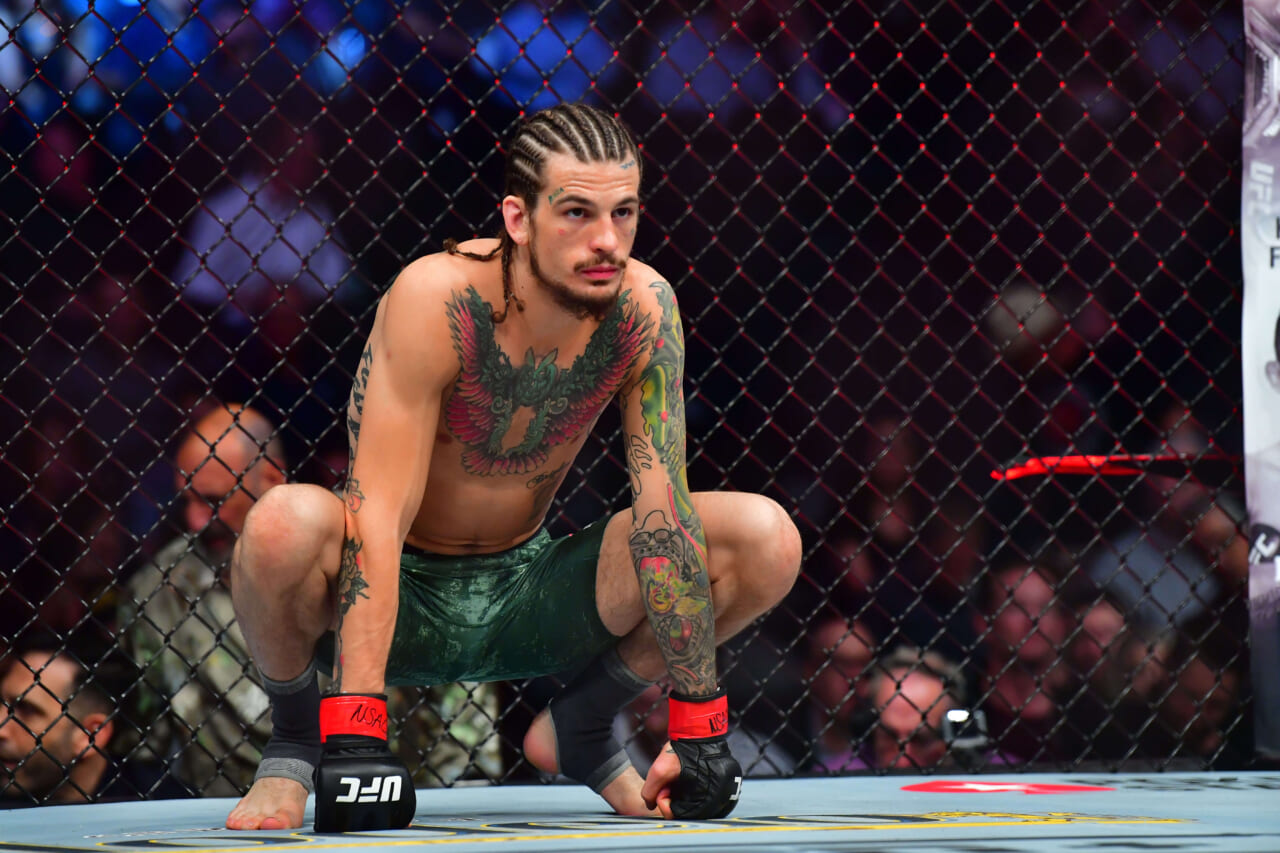 This past Saturday at UFC 269, The Suga Show kicked off the main card. Sean O’Malley (15-1) took on Raulian Paiva (21-4). Both men were just on the outside of the rankings and were looking to crack the top fifteen.

The fight was expected to be a good test for O’Malley. Paiva had just defeated the highly regarded Kyler Phillips who is also one of O’Malley’s training partners. His overall skills presented a unique challenge for O’Malley.

In the first round, O’Malley circled a lot on the outside and seemed a tad gun shy. However, upon reflection, he was mainly just trying to gauge the timing of Paiva. There was no rush from O’Malley on Saturday night.

In the second half of the first round, O’Malley really turned it on. He timed a perfect right hand that hurt Paiva badly and once Paiva was hurt, he was given no time to recover.

O’Malley pounced and unleashed massive shots. He timed a beautiful body shot that lowered Paiva’s hands before delivering the finishing blow up top. It was a perfect performance from O’Malley at UFC 269.

O’Malley revealed after the fight that he nearly pulled out of UFC 269 with a rib injury. He also suffered a hand injury during the fight which could keep him on the shelf for a couple of months.

However, whenever he’s ready to go, the UFC needs to bump up the competition level. In my opinion, O’Malley is already in a position to take on someone in the top ten.

However, I think he will continue to stay patient and gradually increase the competition level. When thinking of potential next opponents, there’s another prospect that makes too much sense.

Right next to O’Malley in the UFC rankings is Song Yadong (18-5-1). Song is a very highly regarded young bantamweight and he would definitely test The Suga Show. A win over Song could put O’Malley just a couple of fights away from a potential UFC title shot. 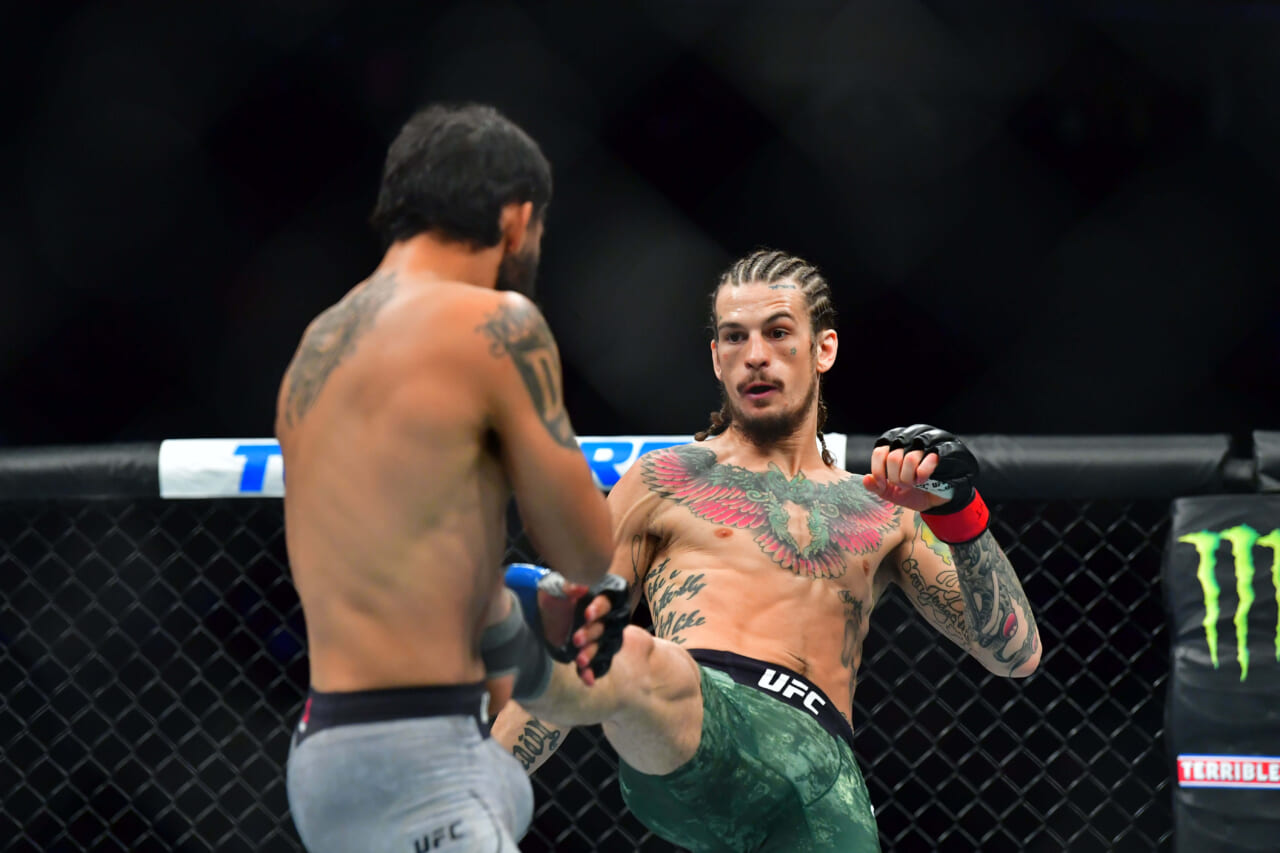 Kicking off the PPV main card atÂ UFC 269 was a battle between two dynamic strikers in the bantamweight division. The Suga Show returned as Sean Oâ€™Malley (14-1) took on Brazilian standout Raulian PaivaÂ (21-3).

Raulian Paiva made his UFCÂ debut at 17-1 and he did it in the flyweight division. However, he got off to a rough start.

Paiva lost his first two fights and ultimately moved up in weight. Heâ€™s now on a three-fight winning streak which includes a win over Oâ€™Malleyâ€™s teammate in Kyler Phillips.

That said, Paiva had a tall mountain to climb at UFCÂ 269. Sean Oâ€™Malley is one of the more dynamic fighters in all theÂ UFC. Heâ€™s incredibly talented wherever the fight takes place, but he shines in the stand up.

Oâ€™Malley is huge for the weight class and heâ€™s going to have a big size advantage on Saturday night. After suffering his first loss to Chito Vera last year, Oâ€™Malley has bounced back with two solid wins this year.

The UFC 269 bantamweight started with immediate pressure from O’Malley. The striking starts with a body kick from O’Malley. Paiva tries to catch a kick and take O’Malley down but O’Malley defends well.

Now it’s Paiva pressure as O’Malley circles the outside. Good jab from O’Malley. O’Malley looks for a body kick and Paiva lands one of his own. Paiva looking to get more aggressive here and he lands a nice low kick.

Paiva catches O’Malley with a nice right straight. Low kick behind it causes O’Malley to switch stances. Halfway through the round and Paiva continues with the pressure. Big left straight lands for O’Malley but Paiva doesn’t seem bothered.

Another good low kick lands for Paiva. Lots of feints from O’Malley. O’Malley tripes up on the jab to get some space after eating a low kick from Paiva. O’Malley steps in but it’s Paiva that throws. However, nothing solid lands.

Paiva pushes forward with a combination. O’Malley lands a flush right hand and Paiva is hurt badly. O’Malley all over him and Paiva is out on his feet. The referee is giving Paiva every opportunity but O’Malley finishes the fight. Huge performance at UFC 269 from The Suga Show.

Kicking off the PPV main card at UFC 269 is a battle between two dynamic strikers in the bantamweight division. The Suga Show is back as Sean O’Malley (14-1) takes on Brazilian standout Raulian Paiva (21-3).

This is a massive opportunity for Raulian Paiva to really put himself on the map at 135 pounds. Paiva made his UFC debut at 17-1 and he did it in the flyweight division. However, he got off to a rough start.

Paiva lost his first two fights and ultimately moved up in weight. He’s now on a three-fight winning streak which includes a win over O’Malley’s teammate in Kyler Phillips.

That said, Paiva has a tall mountain to climb at UFC 269. Sean O’Malley is one of the more dynamic fighters in all the UFC. He’s incredibly talented wherever the fight takes place, but he shines in the stand up.

O’Malley is huge for the weight class and he’s going to have a big size advantage on Saturday night. After suffering his first loss to Chito Vera last year, O’Malley has bounced back with two solid wins this year.

This is such a great fight to kick off the PPV main card because you have two guys who will stand in there and strike. These two will put on a show at UFC 269.

On the flip side, O’Malley needs to keep the fight at range where he will have a big advantage. I’m expecting a kick-heavy attack from The Suga Show on Saturday night.

Ultimately, I’m finding a hard time seeing Paiva winning this fight. While I think he will put up a good fight, I think O’Malley catches him clean and puts him away in the second round.

The Suga Show is returning to the UFC. ESPN’s Brett Okamoto was the first to report this evening that Sean O’Malley (14-1) has his next date inside the octagon. Suga Sean will be taking on Raulian Paiva (21-3) next.

Earlier today, we found out that Cruz would be taking on Pedro Munhoz at UFC 269. Munhoz was another fighter O’Malley was hinting at fighting. However, he will fight neither and he will get Paiva instead.

Like O’Malley, Paiva earned himself a UFC contract by winning a fight on The Contender Series. However, he would go on to lose his first two fights in the UFC. Granted, they were in the flyweight division and to two of the better fighters in the division.

Paiva moved up to bantamweight for his last fight and took on Kyler Phillips. He had an incredible performance and went on to pick up the win. Now, he’s going to try and ride that momentum into defeating Sean O’Malley.

There is no questioning the fact that Sean O’Malley has an “It” factor about him. When you look at him, look at the way he fights, and listen to the way he talks, the guy can be a superstar for the UFC.

However, he still has to back everything up inside the octagon. O’Malley has been very good during his tenure with the UFC, but he’s still not taking on the best of the best at 135 pounds.

In taking on this fight against Paiva, he’s taking on a top prospect, but not someone near the top. These are the kind of fights that O’Malley has to really put on a show if he wants to be taken serious and get the big names and the big money.