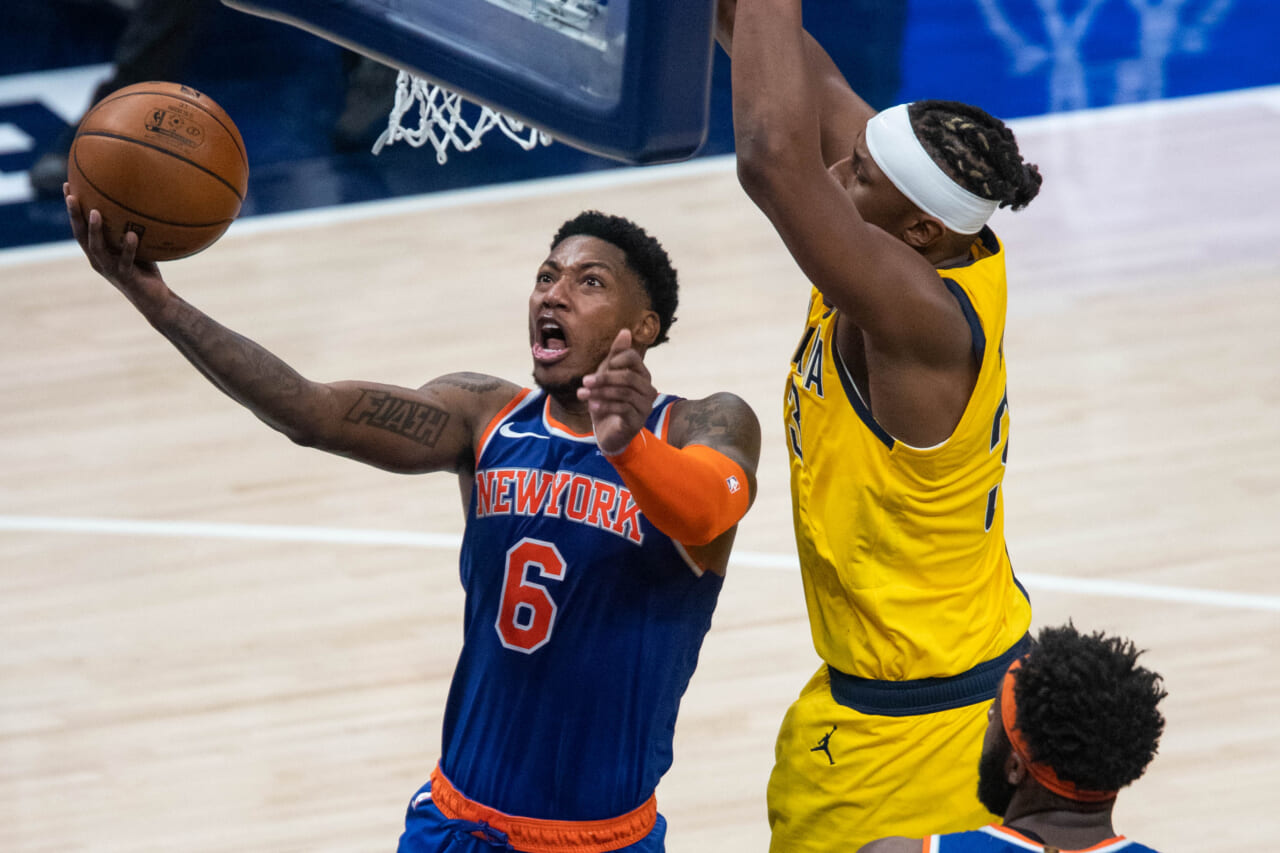 New York Knicks guard Elfrid Payton struggled against the Cleveland Cavaliers during a painful loss on Friday, January 15th. The Knick point guard finished with 9 points after shooting 4-7 from the field. Payton had 3-rebounds and 3-turnovers. The most glaring and disturbing stat category Elfrid Payton possessed was accumulating 0-assists for the entire game.

Cleveland did what many other teams will continue to do, play zone defense while Payton is trying to run the point- guard position for the New York Knicks. Payton struggled against the length of Clevelandâ€™s team, leading to sloppy turnovers by himself and his teamate RJ Barrett.

Many Knick fans have lost confidence and patience with a few Knick players. However, Payton is leading the race as the most hated Knick by simply frustrated Knick fans. Some fans went as far as mentioning Elfridâ€™s ability to stay locked-in even when heâ€™s struggling. There are whispers going around stating that Elfrid Payton mentally checks out if things arenâ€™t going right for himself and the squad.

Rumors are circulating about Isaiah Thomasâ€™s availability after a long period of being away from the NBA. Some chatter in Knicks universe states that the Knicks should give Isaiah Thomas a chance due to lack of shooting depth.

Overall, the Knicks are depleted by injuries. The players earning minutes currently are banged up. However, Tom Thibodeau and the Knicks must continue digging deep on defense in order to give themselves a chance for victory. Offensively, the Knicks need a starting point-guard who can shoot the basketball. Many are calling for Quickley to start. Thereâ€™s definitely a possibility, however time will tell what these Knicks are really made of.

On November 18th, 2020, during an unprecedented virtual NBA draft, the New York Knicks selected a sniper who happens to be a high-flying power forward by the name of Obi Toppin. The ferocious dunking Obi Toppin is the son of a New York City streetball legend known as â€œDunkers Delight.”

Toppin is an efficient scorer, excellent passer, and an effortless floor spacer, which is why heâ€™ll be a very compatible piece next to Mitchell Robinson in the Knicks frontcourt. The former Dayton Flyer is a shooting guard trapped in a 6â€™9â€ 220lbs athletic body. Blake Griffin is a power forward who can occasionally stretch the floor after 11years in the NBA. Griffinâ€™s compatibility with DeAndre Jordan worked half a decade ago due to Blakeâ€™s reliance on athleticism, however, Toppinâ€™s natural shooting ability already makes the fit more seamless than Blake and DeAndreâ€™s frontcourt pairing during their Clipper days.

Coming to you live at The Mecca ðŸ’¥ pic.twitter.com/JwKTS8f8MJ

Many were surprised Obi Toppin fell to the 8th pick. Some mock scouting reports had the former Dayton high flyer getting picked top three in the draft. Leon Rose celebrated the pick with two fists in the air during the early stages of a wild virtual NBA draft night.

The Knicks went on to select Immanuel Quickley, a sharpshooting guard from Kentucky. Quickley is another seamless fit at shooting guard for the Knicks. Quickley may be slightly undersized at 6â€™3â€, however, he possesses a 6â€™8â€ wingspan and shoots a scorching 90% from the free-throw line. The 2020 NBA draft was similar to the â€œWild Wild West,â€ yet Leon Rose and company managed to work under pressure and gain valuable assets for the Knicks.

Overall, Obi Toppin will be able to help the Knicks immediately. Many are concerned with Toppinâ€™s defensive liability, however, Tom Thibodeau, Kenny Payne, and Mike Woodson will help the 22-year-old rookie on the defensive end of the court. Fans, grab your popcorn and get ready for free agency.