Ray had lost his PFL debut to Alex Martinez to start the season and needed a big win against Pettis if he wanted a shot at the playoffs. Well, that’s exactly what he did on Saturday night. After a competitive fight, Ray locked up a unique modified body lock in the second round.

Despite getting submitted by Ray, Pettis still leads the charge with six points and he gets the top spot. He will actually get an immediate rematch with Ray who has snuck in as the fourth seed. Alex Martinez and Olivier Aubin-Mercier make up the two and three seeds and they will battle for a spot in the PFL finals.

Entering the season, Pettis had a desire to be the top lightweight seed entering the 2022 playoffs. That is what he ended up accomplishing, however, that doesn’t take away from the fact that Pettis’ run in PFL hasn’t met his expectations.

The UFC tried to resign Pettis back in 2020, but he was determined to test free agency. He won his last two fights in the promotion and walked into a big deal with the PFL. Many were expecting him to do great things in his first season in 2021.

Instead, Pettis went 0-2 and looked really underwhelming. Then, he looked sensational in his 2022 PFL debut. Maybe this would be the year Pettis would be the star that PFL paid for. Well, Stevie Ray halted the progress again defeating the former UFC champion.

Now, Pettis is just 1-3 in four bouts with the PFL. He walks in as the top lightweight seed in the playoffs, but he can’t be extremely confident. It’s been a struggle, but he can still erase the demons if he can win his next two fights to claim the 2022 title.

Tomorrow night the PFL will host their fifth event of 2021. While the event will feature mostly heavyweights and featherweights, there is one lightweight matchup that will go down in the co-main event of the evening.

That lightweight matchup features former UFC lightweight champion Anthony “Showtime” Pettis (25-12) taking on Stevie Ray (23-10). Pettis was a massive signing for PFL prior to the 2021 season.

He was coming off back-to-back wins in the UFC as he entered free agency. Then, he went 0-2 in his opening season admittedly saying he underestimated the PFL competition. 2022 appears to be different and he showed that by submitting Myles Price in the first to kick off his season.

Now, he will take on the tough Stevie Ray in his second bout. Ray had his first bout in 2.5 years back in April when he took on Alex Martinez. Prior to that, he had a decent run in the UFC and even defeated Michael Johnson in his last bout. He lost to Martinez by decision, but he’s looking to get back on track and defeat Showtime tomorrow night.

The main event of PFL 5 will feature the defending heavyweight champion Bruno Cappelozza (15-5) as he takes on fellow Brazilian Matheus Scheffel (15-8). Scheffel was knocked out in his season debut while Cappelozza ran through his first opponent in the first round.

Not surprisingly, Cappelozza is a massive favorite to pick up the win tomorrow night. Other fights to note on the main card is a featherweight matchup between last year’s runner-up Chris Wade (21-7) and Kyle Bochniak (11-6).

Bochniak came up short in his PFL debut, but Wade was able to pick up an impressive win over Lance Palmer. Bubba Jenkins and Brendan Loughnane are also featured on the prelims tomorrow night.

UFC veterans Juan Adams and Maurice Greene will also be making their PFL debuts in the heavyweight division tomorrow night. A lot of solid fights and the full card can be viewed below!

PFL announced yesterday their fifth card of the 2022 season which will feature heavyweights, featherweights, and a one-off fight in the lightweight division. In that lightweight contest, former UFC champion Anthony “Showtime” Pettis (25-12) will take on Stevie Ray (23-10).

This card takes place on Friday, June 24th and will be broadcasted on ESPN. Pettis was a huge signing for PFL prior to the 2021 season. However, his first season with the promotion didn’t go as planned as he went 0-2 and didn’t make the playoffs.

Pettis has admitted that he underestimated the competition in PFL. That said, he started the 2022 season strong with a first round submission over Myles Price. Now, he’s going to be taking on Scotland’s Stevie Ray.

Ray spent more than four years with the UFC prior to jumping to PFL. He’s been in there with the likes of Paul Felder, Joe Lauzon, and Michael Johnson. Ray lost his season debut to Alex Martinez by decision, but he’s poised to give Showtime a helluva fight next month.

In the main event of PFL 5, last year’s heavyweight champion returns to the cage. Bruno Cappelozza (15-5) will look to remain perfect inside the PFL cage has he takes on Matheus Scheffel (15-8).

Scheffel was knocked out in his first appearance of the PFL season while Cappelozza was dominant once again. Since making his debut with the promotion last season, Cappelozza is now 5-0 with only one opponent going the distance. Three of those wins have come in the first round.

In terms of the featherweights, there’s a banger of a fight on the prelims beteween Brendan Loughnane (22-4) and Boston Salmon (8-4). This is a huge fight for Loughnane who will look to secure a playoff spot ahead of the PFL’s trip to the UK.

The rest of the PFL 5 card can be viewed below! 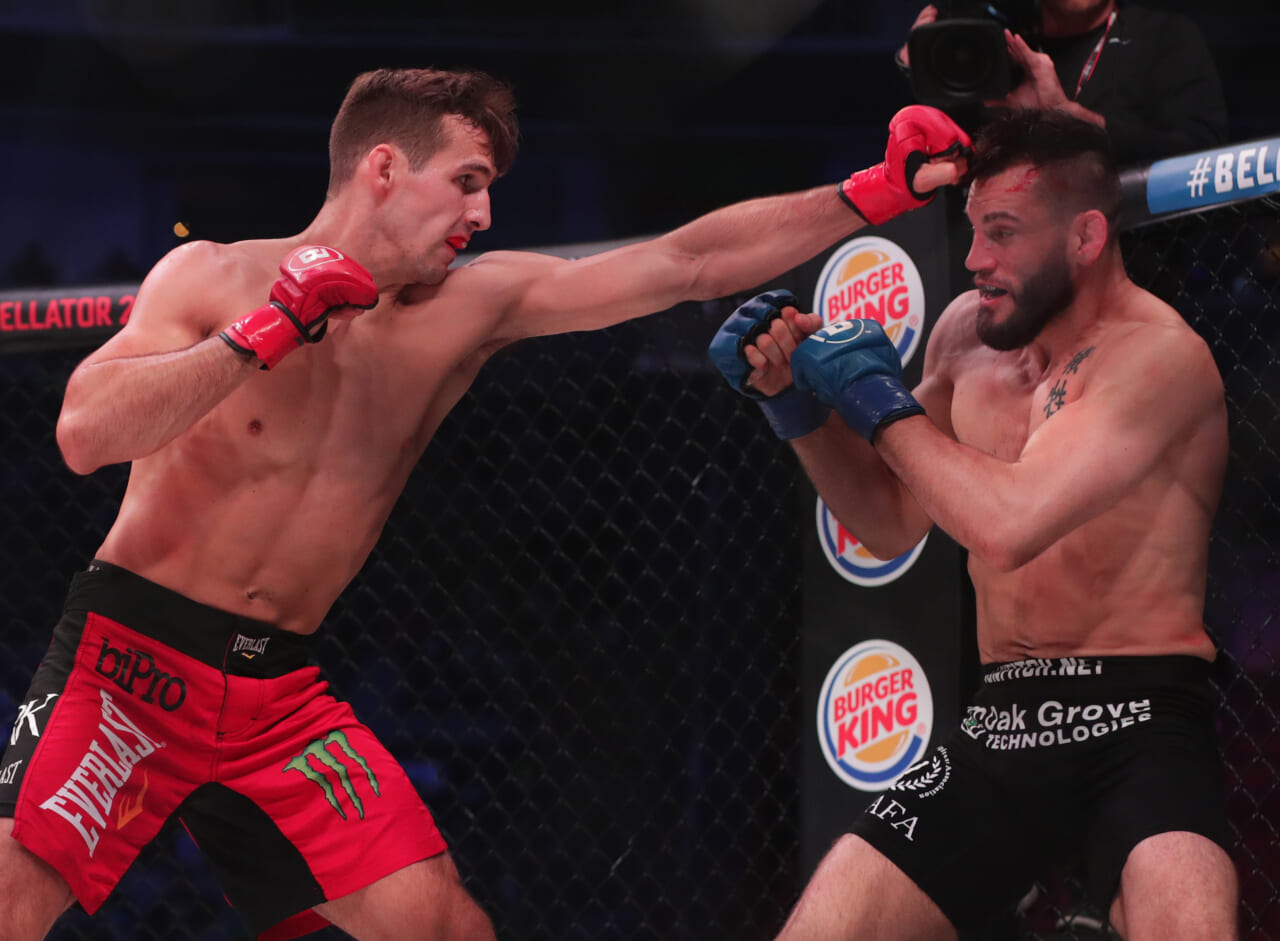 The PFL has announced their matchups for their fifth event of the 2021 season. This fifth event will feature the second matchups between the welterweights and the light heavyweights of the PFL.

In the main event of the evening, former Bellator champion and top UFC contender Rory MacDonald (22-6-1) will be taking on UFC veteran Gleison Tibau (35-15). The fifth PFL card of 2021 will take place on June 17th.

MacDonald will be making his second appearance with the Pro Fight League. He was the promotion’s biggest signing prior to the 2020 season, but last season was cancelled due to the COVID-19 pandemic.

With the PFL up and running in 2021, MacDonald made his debut at PFL 2 when he submitted Curtis Millender in the first round. MacDonald is being looked at as the favorite to become the Pro Fight League welterweight champion.

Standing in his way on June 17th is the tough Gleison Tibau. Tibau lost his opening matchup at PFL 2 by decision. That loss snapped a two-fight winning streak which included a victory over former Bellator champion Will Brooks.

At 37 years old, Tibau is now fighting in the welterweight division after spending the majority of his career at lightweight. He’s been in there with some of the best in the world and he’s looking to pull a massive upset at PFL 5.

Other matchups to watch at PFL 5

I’m incredibly excited to see the 2019 PFL champion Ray Cooper III (21-7-1) compete in a few weeks. Cooper had a dominant first round submission victory back in April to start his 2021 season.

Ray Cooper III made his PFL debut in the 2018 season. He started 4-0 which included two stoppage wins over former world champion Jake Shields. Cooper was then submitted in the finals. However, he bounced back to win the 2019 season and become welterweight champion.

He will be taking on Nikolay Aleksakhin (24-5, 1 NC) on June 17th. Aleksakhin had his first matchup of the season end in a No Contest after an accidental eye poke back in February. That was Aleksakhin’s second appearance in the PFL cage.

His first came back in 2019 when he scored a TKO win over Jesse Ronson. That No Contest snapped a seven-fight win streak. He should be a good test for the former PFL champion in a few weeks.

I’m also very excited to see the matchup between light heavyweights Vinny Magalhaes (19-12, 1 NC) and Antonio Carlos Jr (11-5, 1 NC). The two UFC vets are two of the best submission artists in the game. If you’re a fan of grappling this is definitely one to watch at PFL 5.

You can check out the full lineup for the Pro Fight League’s fifth event of 2021 below.

Welterweights and Light Heavyweights make their final push towards the 2021 PFL Playoffs! pic.twitter.com/pRppWGHvOh