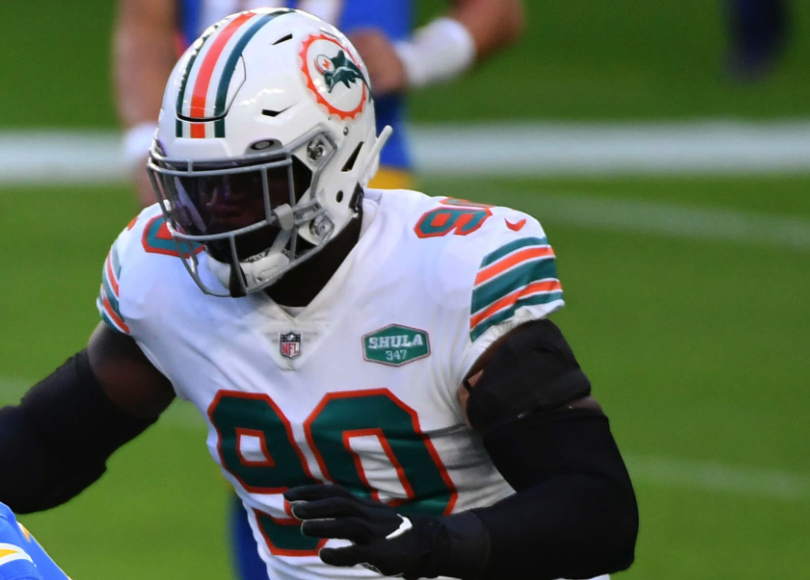 Shaq Lawson doesn’t change the New York Jets’ 2021 outlook, but he can be a solid stopgap in a developmental season.

The New York Jets are fulfilling an offseason promise to put Lawson on their defensive line.

Carl Lawson is done for the year but those designing the Jets’ uniforms can still use the surname’s nameplate. The Jets reportedly welcomed in defensive end Shaq Lawson to the fold on Sunday, sending the sixth-round pick they gained from San Francisco in last year’s Jordan Willis deal. Most recently donning a Houston Texans helmet, Lawson is on to his fourth team after entering the league as Buffalo’s first-round pick in 2016 (immediately before the Jets chose Darron Lee).

Shaq Lawson arrives at an interesting landmark on the Jets’ 2021 timeline. It was previously hinted that the Jets would seek help in the pass rush after Carl Lawson, the Jets’ most expensive offseason acquisition, was lost for the year after rupturing his Achillies during a joint practice in Green Bay. Fellow veteran Vinny Curry was likewise lost for the year after dealing with blood clots. The Jets appeared to have fulfilled that quest with Sunday’s transaction.

What exactly can be expected with Lawson poised to don a green uniform? ESM investigates…

The Jets are desperate enough to write a redemption story for the past decade of fruitless football, much less finally pen a sequel to the Super Bowl III epic. To that end, they can’t concern themselves with co-authoring someone else’s, no matter how talented that player can be. That’s removed them from the conversation on several high-profile stars and, frankly, should’ve steered them away from the expensive Le’Veon Bell gambit in 2019.

Shaq Lawson, at first glance, appears to carry the baggage that a developing team like the Jets should avoid. The Clemson alum has shown flashes but has yet to live up to his first-round billing. New York is his fourth team over the past three seasons and he was playing deep into the second half of the Texans’ preseason contests. His lasting legacy, as of this moment, is perhaps his status as the penultimate premier pick of Buffalo’s ill-fated Doug Whaley era.

But Lawson’s redemption story that the Jets can literally afford to play a supporting role in. If/when the trade is confirmed, the Jets are set to inherit only circa $2 million of Lawson’s salary, with the Texans set to take on nearly $7 million in dead cap. If Lawson were to perform well enough that the Jets want more, his contract allows the Jets to retain him at just under $9 million. Even with the pick from the Willis trade gone, they will have a dozen choices to work with come next spring.

From a football standpoint, Lawson isn’t being called upon to turn the tide in New York. Even with Carl Lawson in tow, this wasn’t going to be a playoff team in 2021. He can work things in relatively peaceful surroundings with the Jets, where defensive storylines will likely linger on Quinnen Williams’ development and what’s going on in the Jets’ secondary. One could argue he had a similar blank slate in Houston, but the Jets seem much more secure in their future (particularly when it comes to comparing the quarterback situations). What Joe Douglas has done this offseason won’t make the Jets a playoff team immediately but he has built a situation that allows the team to take a risk or two in the name of veteran help.

Lawson potentially enters the Jets in a bit of a prickly situation: the Jets’ preseason slate wrapped on Friday night, giving him just two weeks to cram the Jets’ playbook before they open against Carolina on Sept. 12. But despite Lawson’s lack of a true NFL impact so far, he appears to be on a bit of an upswing.

Whereas the departed Carl Lawson’s hype was partly built on advanced pressure numbers, the incoming Shaq has tried to make a name for himself through more conventional means, traditional numbers that have been sorely lacking in New York in recent times. Lawson has earned 10.5 sacks over the last two seasons, including 6.5 during his final year in Buffalo in 2019. In comparison, only one player (Jordan Jenkins) has reached double-figures in sacks, falling just short of Lawson’s mark with 10. He won’t fully replace the pressure that the unrelated Carl brought in Cincinnati but he is a well-traveled pressure artist in his own right, earning 77 pressures over the last two seasons with the Bills and Miami Dolphins.

Lawson is coming off a solid, if not uneventful, season with the Dolphins after his career-best campaign in Buffalo in 2019. He’s a better option than free agent question marks like Everson Griffen (who went back to Minnesota after the Lawson injury) and Olivier Vernon and was likely far less expensive than potential trade candidates like Dante Fowler or Chandler Jones. The Jets needed pressure and Lawson, despite his flaws, has been reliable in that regard. As to the potential problems when it comes to a speed course in the New York defense, Lawson got a taste of 4-3 action during his brief time in Houston under defensive coordinator Lovie Smith.

“With this defense, you can just attack,” Lawson said of the 4-3 scheme, per Anthony Wood of SI.com. “You don’t (have) to think about no blocks or anything you’ve got to worry about. I mean, that’s the great part about being in a 4-3 defense.”

Houston head coach David Culley got to witness some of Lawson’s developmental antics as a Buffalo assistant. Asked about his potential to fit with the Texans’ front seven, Culley reminisced about pass-rushing endeavors that have been sorely lacking in green metropolitan circles in recent seasons.

“Shaq was a pass rusher up there,” Culley said, per notes from the Texans. “He’s quick. He has great movement. He’s got a great first step…He plays with good leverage, and he’s got good hands, and basically, what we teach all those guys to do, he has that.”