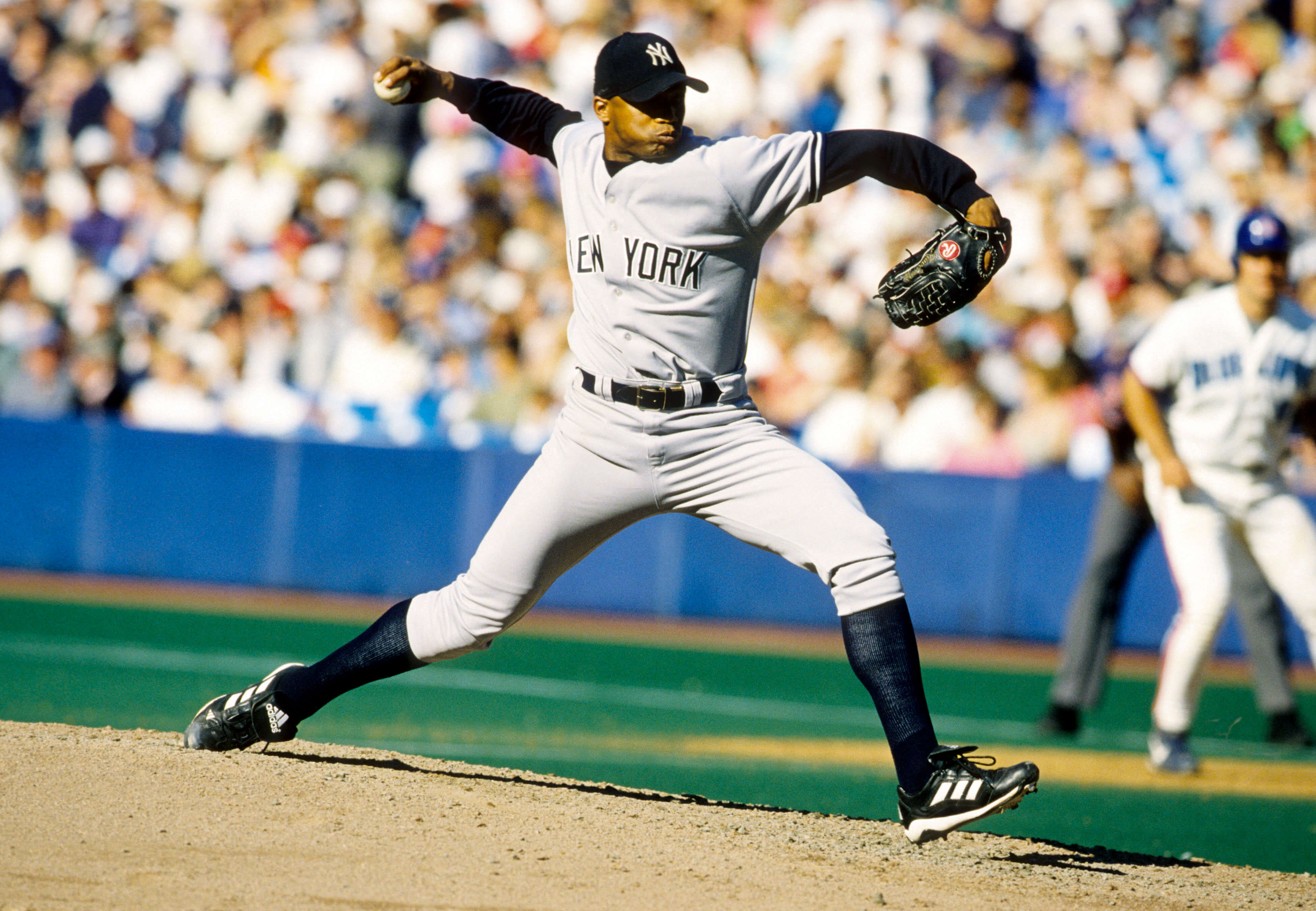 The New York Yankees have been blessed with some of the greatest pitchers and players MLB has ever seen. One of those players that has one of the more interesting stories is Orlando Hernandez. Most Yankee fans fondly remember him as just “El Duque.”

This is the story of a young Cuban boy who loved baseball, who the Cuban Government would eventually ban from playing the game he loved. He would take the dangerous route and defect from his homeland, eventually making it to the Bahamas and then to Costa Rica, and finally to the pitching mound of the New York Yankees.

Orlando Hernandez Pedroso was born on October 11, 1965, on the communist island of Cuba. In Cuba, baseball is almost a religion, and most young boys would want to grow up and play for the National team. The Duke, in Spanish El Duque, was no different. He would play ball anywhere where he could find a game. At the age of 27, he would finally get onto the Industriales of Havana. He would pitch well and help the team to the 1992 and 1996 National Championships.

After Cuba got wind of possible ties to an American agent, the Cuban Government left him off the Olympic roster. Orlando was detained and questioned about his possible American ties. Afterward, he would be banned from playing baseball. On Christmas Day 1997, he would defect from Cubs on a leaky raft or boat, according to which you choose to believe. He would defect from the small city of Caibarien. As and his companions were approaching the Florida Straits, they were intercepted by the U.S. Coast Guard and be brought to Freeport in the Bahamas, where the group was confined in a facility for illegal immigrants.

The plan was to return the group to Cuba. Different groups lobbied that if returned, they would be subject to severe punishment that would cause them to be allowed into the United States. After a few months in Costa Rica, the New York Yankees would arrange a Visa, and Orlando Hernandez would become a Yankee. Orlando would refuse the deal and instead seek asylum in Costa Rica. As a non-U.S. resident, he was able to negotiate as a free agent.,

In the spring of 1998, he would start his four-year $6.6 million contract. The Yankees would be treated to a dynamic pitcher with an incredible story. They would, for the first time, see a man on the mound that had a delivery that included a leg kick that would cause his left leg to pull all the way up to his shoulder. In his first year, he would be 12-4 with a 3.13 ERA and be fully embraced by the Yankee fans, as he helped them regain the World Championship. In 1999 El Duque would have his best year in the major leagues. He would go 17-9 with 157 strikeouts in 214 innings pitched.

In a famous incident in Yankee history, during a game in June, he would field a ball that would get stuck in his glove. the quick thinking El Duque threw the entire glove, with the ball in it, to first for the out. In the 1999 World Series, Hernandez would be the starting pitcher in game 1 at Turner Field, he would pitch eight innings allowing only 1 run in the Yankees 4-1 win. The Yankees would go on to sweep the series over the Atlanta Braves.

The 2000 season for the Yankees would be disappointing as they would win only 87 games compared to the 114 wins the year before. Hitting was down, and pitching was not as good. El Duque would go 12-13 while being a workhorse. In the ALDS, he would win his game 4-2. In the ALCS, he would win game 3 7-1. He would also win the deciding game six, sending the Yankees to the Subway Worlds Series against the Mets. He would lose his only start in the Series.

Over his first three postseasons from 1998–2000, Hernández performed Exceptionally well, going 8-1 with a 2.23 ERA.
In 2001 and 2002, he would have a record of 12-12 before being traded to the Toronto Blue Jays. He would never pitch a game with the Jays, as he had to have surgery for a rotator cuff injury. The Jays would release him. At the start of the 2004 season, he would again be a Yankee signing a one-year contract.

In 2008 he would have two surgeries that would not allow him to pitch. With no major league offers, he would play in the minor league system of the Texas Rangers. His velocity and command would begin to fall off, and he would not be called up to pitch with the big team. Holding out again for a place in the major league, he would again sign a minor league deal in July of 2010. During the season, the manager informed him he would not be called up, and Hernandez quit the team.

He would announce his official retirement in August of 2011. A nine-year pitching career is considerably short. However, he can look back at his glory years with the Yankees. After retirement, he would take up residency in Miami, where the now 56-year-old still lives with his common-law wife, dancer Noris Bosch. He is presently a Spanish-speaking sportscaster. The last time fans saw him in pinstripes was during the 2013 and 2014 Old Timers’ Day at Yankee Stadium. 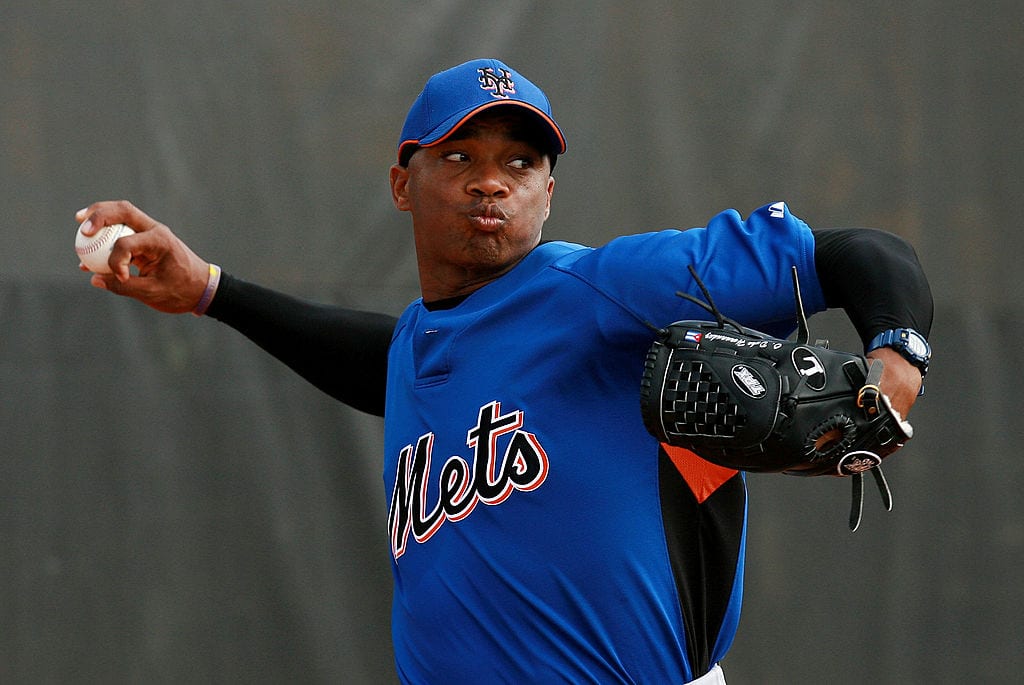 Much like many other veterans who finish their career in Queens, Orlando Hernandez‘s New York Mets career is forgettable, but not because he did not play well. At ages 40 and 41, he spent the final season and a half stabilizing the Mets starting rotation.

Five players in their 40s have have hit a triple for the Mets: Willie Mays, Moises Alou, Orlando Hernandez, Frank Tanana and Gary Sheffield (twice). Hernandez and Tanana were pitchers. #bestofalltim

Hernandez developed a reputation for his postseason dominance, which is why the Mets traded for him in 2006. The trade with the Diamondbacks occurred on May 24 in exchange for reliever Jorge Julio. Hernandez struggled in Arizona with a 6.11 ERA in nine starts. He pitched much better with the Mets, putting up a 4.09 ERA in 20 starts. Hernandez was in line to start game one of the postseason, but a calf injury sustained running the day prior scratched him from the roster.

At 41, he looked sharp as ever during the 2007 season. He had a 3.72 ERA over 27 games, which was only second to Oliver Perez. Hernandez even made three relief appearances in September to bolster the putrid Mets bullpen. He received foot surgery after the season, which caused him to miss all of 2008, which effectively ended his Mets career.

After a couple of minor league comeback attempts, he retired following the 2011 season. Hernandez was not in his dominant Yankees form with the Mets, but he was still a key reason the team was in contention during his time with the team.