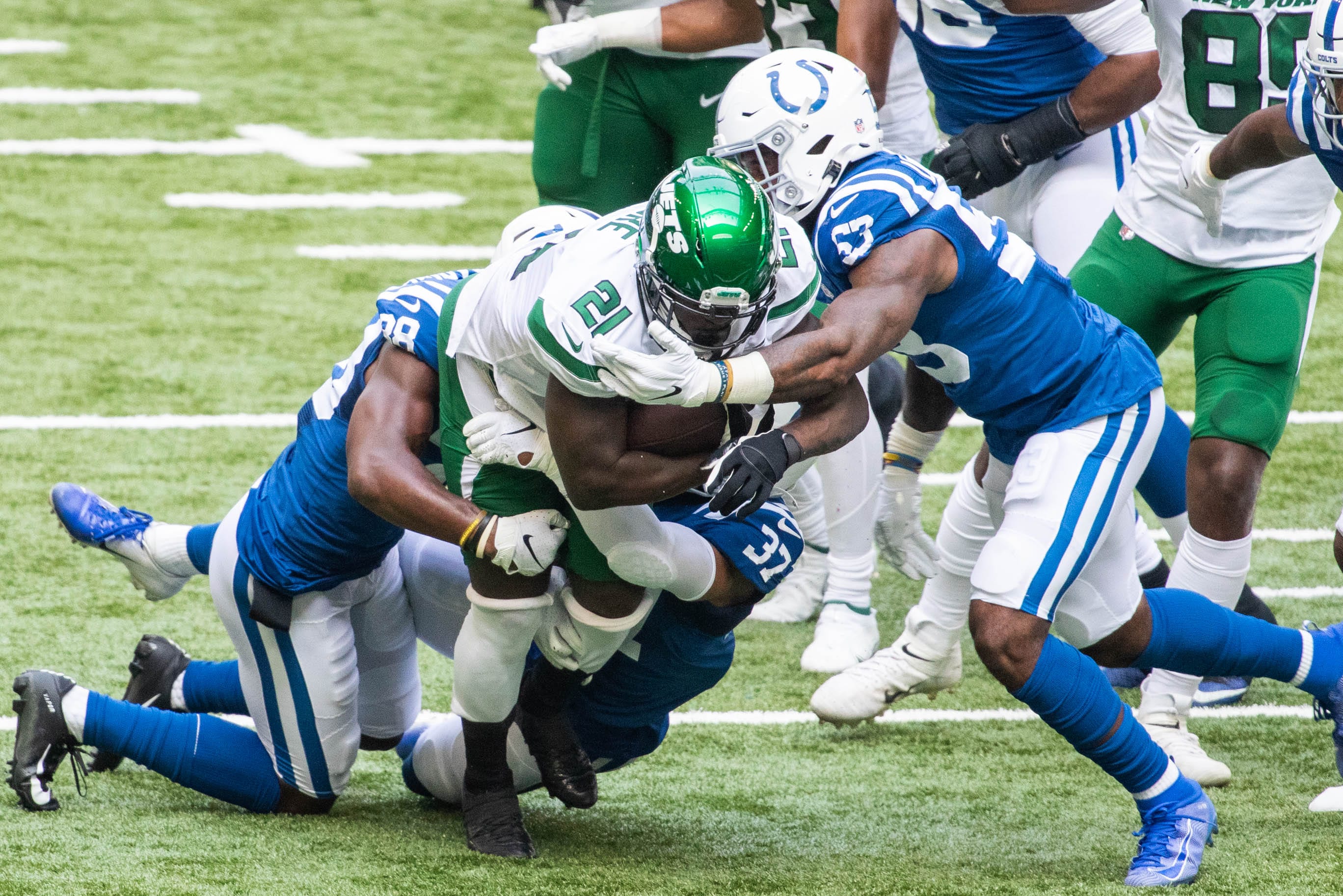 Much like the original cast of another metropolitan staple, Saturday Night Live, the modern New York Jets could well be described as “Not Ready for Prime Time Players”.

The Jets’ only prime time game of the 2021 season (discounting a morning game against Atlanta in London) is a Thursday night contest against the Indianapolis Colts. Former division rivals will square off for the second straight season: the Jets will be seeking revenge for a 36-7 shellacking they endured at Lucas Oil Stadium, one that showed how far they had fallen since the 2018 trade that put Sam Darnold on a green path.

Both the Jets and Colts have made changes at quarterback since last season’s showdown: no trade was necessary for the Jets to choose Sam Wilson second overall in April while the Colts have opted for another veteran in Carson Wentz after Phillip Rivers’ retirement.

The Skinny On the Colts

The Colts have managed to make the most out of meandering in franchise quarterback purgatory after Andrew Luck’s infamous abrupt retirement. That’s been made possible by a reliable offensive line anchored by Quinton Nelson, one that has protected its stopgap throwers like Rivers and Jacoby Brissett. Running back Jonathan Taylor has likewise flourished, as the rookie broke through for 1,169 yards last season. A fearsome defense is headline by three-time All-Pro Darius Leonard.

Indianapolis has built its consistency through the draft, an endeavor that partly started through its fateful deal with the Jets. The picks sent to the Colts eventually yielded horseshoes for several vital contributors, including primary blockers Nelson and Braden Smith, defenders Kemoko Turay and Rock Ya-Sin. Rusher Jordan Wilkins, the final portion, has also proven to be a reliable depth option, working with Taylor, Nyheim Hines, and Marlon Mack (who missed nearly all of last season with a torn Achilles).

Eight Indianapolis starters have been acquired over the last three drafts prior to 2021. At least one more should be added to that tally with Michigan pass rusher Kwity Paye arriving at 21st overall last spring. NFL agents recently named Colts general manager Chris Ballard the best talent evaluator and in a poll conducted by Ben Standig of The Athletic. Both Ballard and head coach Frank Reich were recently granted contract extensions that will keep them in Indianapolis through the 2026 season, high honors for the first-time GM and lead headset man.

Colts owner and CEO Jim Irsay was proud to keep continuity in Indianapolis in addition to the sense of consistent stability that could’ve been lost in the wake of Luck’s franchise-altering departure.

“When you bring in two people like Frank and Chris who had never been general manager-head coach before, you invest in their growth,” Irsay said, per team reporter JJ Stankevitz. “You invest in the fact they’re going to mature and become better than they were when they started…that’s what continuity does, it brings the day where you can read the growth of a person’s professional track as they grow.”

“They’re outstanding men in our community, they’re the type of men that our players can look up to and truly see as mentors where they know their feet go where their words go. That means a lot to me.”

The new hope for the Colts is Wentz, who’s seeking to reclaim the narrative on his NFL career after the good times in Philadelphia fizzled out. Indianapolis was perhaps the best place for him to land: the Colts have let up only 52 sacks over the last two seasons…in comparison, Wentz was sacked 50 times alone in 2020, and he missed four games after he was benched for Jalen Hurts.

Indianapolis lost of one of its blocking staples this offseason through Anthony Costanzo. The Colts made up for the loss through the signing of Eric Fisher, Kansas City’s top overall pick from 2013, but he’ll be out for the team’s Sunday opener against Seattle (1 p.m. ET, Fox). Paulsboro, NJ native and recent signee from Houston Julien Davenport is scheduled to take over. The rest of the group is otherwise the same. Both Nelson had late foot issues that were addressed, but each is scheduled to be a full-go for Week 1.

Right guard Mark Glowinski once against spoke about how important Colts chemistry and continuity was in another report from Stankevitz. It’s exactly what Wentz needs to gain some long-sought protection and for Taylor to keep up the momentum from his freshman campaign.

“We still find ways to learn from one another and make it interesting,” Glowinski said. “We’re still able to use the same jokes and still laugh and stuff like that. It’s kind of funny being able to be together for this long but we’re just working. Like I would say every year, you’re working on the same blocks and everything. You just find another way to get better at those and you can keep developing new ways to do your job. It’s pretty cool to be able to be with all those guys for that long though.”

While Reich was made a staple on the Colts’ staff, several assistants departed, some joining former offensive coordinator and new Philadelphia boss Nick Sirianni. Quarterbacks coach and three-time CFL champion Marcus Brady takes over in Sirianni’s wake, while the Colts were able to keep defensive boss and popular head coach interviewee Matt Eberflus. The arrival of Paye partly settles pass-rushing quandary: the departures of Denico Autry and Justin Houston cost the Colts 15.5 sacks from last season.

How To Beat Them

Indianapolis’ pass rush was hit or miss even with Autry and Houston in tow. DeForest Buckner fulfilled expectations in his first season in blue while inside man Grover Stewart played his way into an expensive extension. Mekhi Becton will likely get first dibs at the legendary Leonard. The group will have to step it up in the early going, as Rutgers alum Kemoko Turay will miss Sunday’s opener.

But even with the Costanzo-sized on the offensive line, the Colts felt that needed to address the area through the selection of Paye out of Michigan. Thus, it’ll be up to the Jets’ blockers to keep sowing doubt when they meet up for their nationally televised matchup.

“Kwity pops off the tape, one, with his athleticism and his speed, but also with his effort,” Ballard said of the choice to draft Paye over a lineman, per Joel A. Erickson of the Indianapolis Star. “This kid, he already plays the way we want to play. He’s going to fit in pretty quickly.”

Part of the reason why Philadelphia moved on from Wentz was his increasingly troubling turnover issues: his 15 interceptions were a league-worst in 2020 and he fumbled 10 times…the latter mark was an improvement after putting 16 on the grass last season.

As with so many other areas of their horrid 2020 season, the Jets struggled to force turnovers, picking up only 19. Upping the pressure on Wentz could lead to those struggles resurfacing and the Jets have the front seven to do so, even with the oft-cited red flag of Carl Lawson forced out for the year.

This time around, Wentz’s turnover issues could be partially cast aside by the idea that the Colts have the additional weaponry to get by, namely the multi-pronged run game. The Colts were 1-3 when Taylor, Hines, and Wilkins were held to under 100 yards rushing