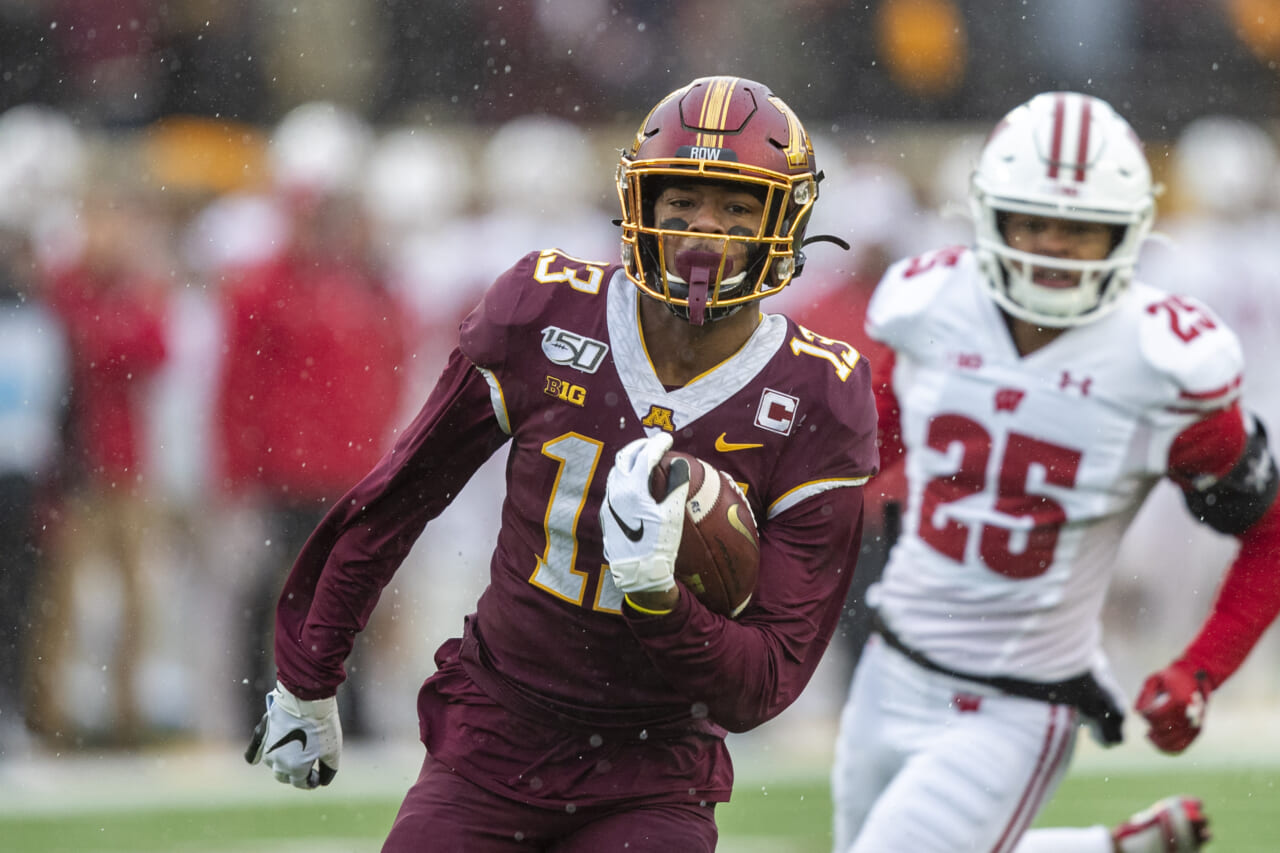 If the New York Giants can get creative in the 2021 NFL draft, they can walk away with several premium draft selections and upgrades at multiple spots of weakness. Of course, injecting an offensive playmaker into a unit that ranked 31st in scoring last year is essential, but their defense could also use a bit of support.

In this mock draft, we execute a trade back with the New England Patriots, assuming there is a quarterback on the board they are keen on acquiring, and considering they are only four spots back from the Giants, it is not a crazy leap to make.

Per Drafttek, here are the pick values:

Equal to a FAIR trade.

Minnesota wide receiver Rashod Bateman has been climbing the draft board recently, and for good reason. He is considered one of the best route runners in the 2021 NFL draft class and represents a potential WR1 for the Giants at the NFL level.

In 2019, Bateman posted 1219 yards and 11 scores, adding 20.3 yards per reception to his totals. Heâ€™s not only a vertical threat, given his strong release package and ability to run slant routes in the short/intermediate range. He finds gaps in coverage and has reliable hands as a three-year starter for the Golden Gophers.

Landing Bateman here would be a fantastic selection, as he is a top-four receiver and would likely be a top 10 prospect if he featured in the SEC.

The Giants managed to retain their 43rd overall pick in the draft scenario, and they find an immediate starting guard in Wyatt Davis. Davis is considered an immediate starter at right guard, but the Giants could do something a bit different with his talents.

If they elect to extend Kevin Zeitler one or two more years, they can lower his cap hit for the 2020 season and potentially trade him for draft capital next year.

In this scenario, Davis is plugged in at left guard, and if he progresses nicely, they can keep Zeitler on a minimal cap hit, but if he struggles, they can always move him back to the right side and trade Zeitler for draft capital. This is a win/win scenario and creates more competition at LG with Shane Lemieux and Will Hernandez looking to gain ground.

The Giants might have their pick of the second-round pass rushers at 47, with Penn State Jayson Oweh and Joseph Ossai from Texas available.

Ossai is an intriguing prospect, and I believe the Giants will favor him at outside linebacker. Heâ€™s a bit smaller than Oweh, but Ossai is capable of dropping back into coverage and filling specific spots, which is something that coordinated Patrick Graham likes to do. Ossai is a multiple player, with his ability to put his hand in the dirt and perform as a 5 technique defender.

The Texas standout is known for being clutch and coming up in big moments, and with an unstoppable motor, he reminds me a bit of JPP. He has incredibly strong hands and is quick off the LOS. He is a prospect with incredible upside, and at just 21 years old, his potential could be immense.

Some analysts believe Oweh is the better prospect and could be a 10+ sack pass rusher at the NFL level, but I love Ossaiâ€˜s story and his desire to fight for everything in life. He will commit 100% and give you everything on the field, and I like players who have a chip on their shoulder.

Joseph and his family were selected in the lottery pool for visas to the United States when he was nine years old, and after experiencing bullying in school and overcoming many challenges in his life, he does not want to let an opportunity like this pass him by. Heâ€™s one of those players I simply have a good feeling about, and his talents back up the that gut feeling.