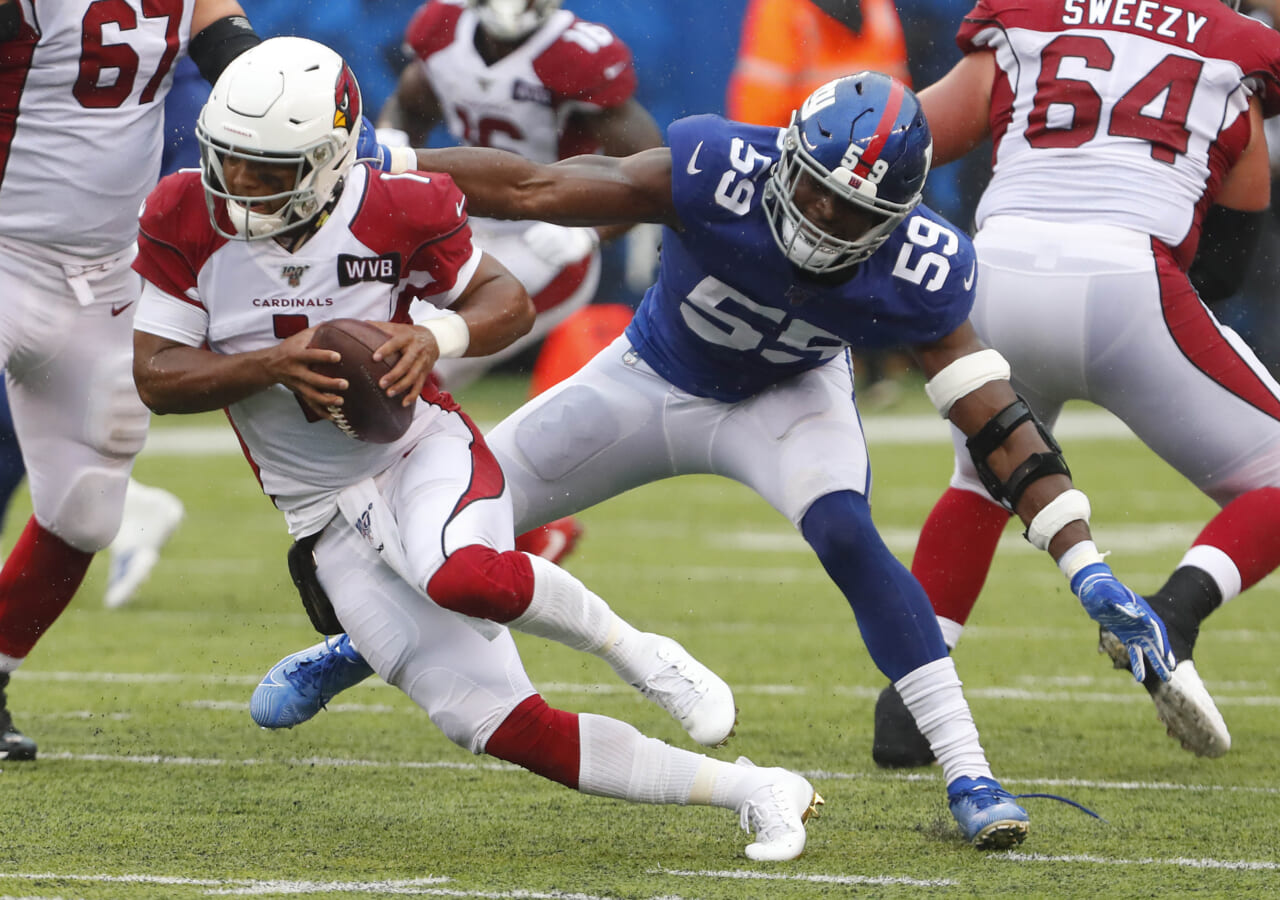 The New York Jets have been cleared for Sunday action at MetLife Stadium, but a dangerous, angry opponent awaits.

After the ongoing health crisis invaded the NFL realm in Florham Park, the New York Jets have been cleared for Sunday action barring any unforeseen developments. They’re set to take on an avian invasion at home, one seeking revenge after a strong start has given way to distress.

The Jets (0-4) will take to the field for the first time in 10 days, as they battle the Arizona Cardinals at MetLife Stadium. They’ll go into battle with a quarterback who previously earned plenty of success with a bird on his helmet, as backup Joe Flacco takes over for the injured Sam Darnold.

New York last took the field on October 1, opening the Week 4 slate in a Thursday night tilt against the Denver Broncos. In what became their closest game of the season, the Jets fell in a 37-28 decision. Darnold earned 314 yards of offense, including a career-best 84 on the ground. A majority of that tally came on a 46-yard scoring rush that gave the Jets their first lead of the season. Jamison Crowder broke the century mark in receiving yardage (104) while Pierre Desir had two interceptions on defense.

Meanwhile, the Cardinals (2-2) have suffered consecutive defeats after a strong start. They by a 31-21 final to the Carolina Panthers last weekend in Charlotte after dropping a home tilt with the Detroit Lions. Kyler Murray threw a trio of touchdown passes in the Carolina defeat, while Jordan Hicks had four tackles for a loss.

The Cardinals are on the Jets’ opposite coast in more ways than one. Not only do they play three time zones away from New Jersey, but they play in a different conference. In other words, meetings between the Jets and Cardinals are not very common, even with the latter franchise lingering around in some way, shape, or form since 1898.

In either case, the Jets lead the all-time series 6-3, earning each win in succession between 1978 and 2012 (the first one coming under the Cardinals’ St. Louis moniker). Arizona broke the streak in their last meeting in 2016, when they took home a 28-3 decision in Glendale.

Brett Favre’s brief yet eventful time as a New York Jet got off to a tough start. The Jets sat at 1-2 and were reeling from a one-sided Sunday night loss in San Diego in a return to Giants Stadium. An ensuing matchup with future NFC champions Kurt Warner, Larry Fitzgerald, and Anquan Boldin was perhaps one of the earliest signs that the 2008 was going to be quite out of the ordinary.

The Jets scoring 34 points seems like a pipe dream to some modern fans, but they acquired that tally in a singleÂ quarterÂ on a late September afternoon against the Cardinals. Dressed in their New York Titans-inspired throwbacks, Favre and Laveranues Coles united for three scores while Darrelle Revis took back a Warner interception back for a touchdown. Arizona slowly worked their way back with three unanswered rushing scores (two from Edgerrin James) in the third quarter, but Favre kept the Cardinals down with three more touchdown passes. Jerricho Cotchery was the recipient of two, while Dustin Keller had the last. New York took the game by a 56-35 final. The six touchdown passes were a career-best for Favre, who united with Warner to throw for 761 passing yards.

“I’m not looking at it in terms of bringing a spark,” Flacco said. “Of course, we want to get things rolling as a team and kind of get our morale up and get us headed in the right direction. But not one guy, including myself, can try to do too much. We just have to go out there, take it play-by-play and let things fall in place.”–Jets QB Joe Flacco on starting Sunday, per Eric AllenÂ

“I think this week particularly, all of us want to get back on the field. There was frustration with how we played last week, so we’ve been chomping at the bit to get back after it. So when you hear that initially, you’re like, ‘Oh no, we really want to get back out there.’ And then you settle in and realize, hey, you can control what you can control.”-Cardinals head coach Kliff Kingsbury on dealing with the Cardinals’ current situation, per Katherine FitzgeraldÂ

Even when we were having the “Is Joe Flacco elite?” debate every week, it was never wise to put the game solely in his hands. The Jets have averaged 35 pass attempts a game over the first four games of the 2020 season. Flacco-led are 31-48 in the regular season when he throws the ball at least 35 times.

New York enjoys a bit of a boost this week with Le’Veon Bell making his return from injury, but the reunion comes in a game where Mekhi Becton, one of the Jets’ rare silver linings, list listed as doubtful on the injury report. With the franchise quarterback down and the receiving corps still missing links (Breshad Perriman is likewise doubtful and Denzel Mims is still inactive), Bell may be called upon to take on an increased workload to alleviate the pressure on Flacco.

Head coach Adam Gase was pleased with the way Bell kept himself in game shape during his injury absence. Bell hasn’t played since the Week 1 defeat in Buffalo.

“I think he can be pretty effective,” Gase said his top rusher in a report from ESPN’s Rich Cimini. “He did a good job of getting healthy and then staying in good shape. (He) did a good job making sure that he maintained where his weight was. I think he feels even better now than he did when we kind of hit that first game.”

Arizona’s run defense ins’t anything to truly write home about, stagnant in around the middle of the pack in the statistical rankings. If Bell can get his legs back quickly and overcome the losses of some starting big men on the line, he can earn a long-awaited return to form and shoulder some of the load a desperate offense needs to properly distribute.

The Jets Will Win If…

Over the past two weeks, the Jets’ defense failed to contain an aging Phillip Rivers and a third-stringer in Denver making his first career start…and they had trouble with Nick Mullens and the 49ers’ reserves the week before that. That was all before they ran into a showdown with Murray, a dual-threat who was working on MVP candidacy over the first two weeks before running into trouble against Detroit and Carolina. Murray has no doubt seen the struggles of the Jets’ defense and has to be licking his chops going into this matchup. The Jets have earned only six sacks so far and was already torched by one dual-threat, Josh Allen, in aforementioned opener against Buffalo. Murray’s prescience has loomed over Jets practice all week.

The Cardinals Will Win If…

They embrace their sense of desperation.

Arizona was seen by some as a team able to play consequence-free football in 2020. Murray excelled in his rookie year, and the outlook was mostly positive moving forward. Expectations rose slightly when DeAndre Hopkins was gifted to them from Houston, but there still would’ve been no shame from a Cardinal standpoint if they didn’t beat out the Seahawks or 49ers in the competitive NFC West.

However, after topping the Niners in Week 1, the Cardinals were seen as surprise contenders. The past two weeks have been disappointed, and Arizona now sits at .500 while the Seahawks remain dominant, the 49ers thrive despite several big injuries, and the Rams start to reintroduce themselves to the NFL scene. A terrifying trap game scenario awaits in New York. It’s a game that’s starting at 10 a.m. local time. It’s a game that the eternal Cardinal Fitzgerald has labeled a “must-win”.

“Seattle is the leader in our division, 4-0 right now, and they are rolling,” Fitzgerald said, per team writer Darren Urban. “We have to be able to find a way to get back on the right track. Another road game, going across three time zones to play, you have to find a way to put together four good quarters in all three phases. It’s as simple as that.”

“We need to be able to keep pace with the Rams and the other teams playing well in the division. It’s definitely a must-win.”

Even with Arizona’s struggles, it’s far too much to ask this Jets team to pull off what would nonetheless be a miracle. The loss against Denver provided a small hint of momentum, but topping an interconference foe bent on division domination is too far out of the Jets’ realm of possibilities.